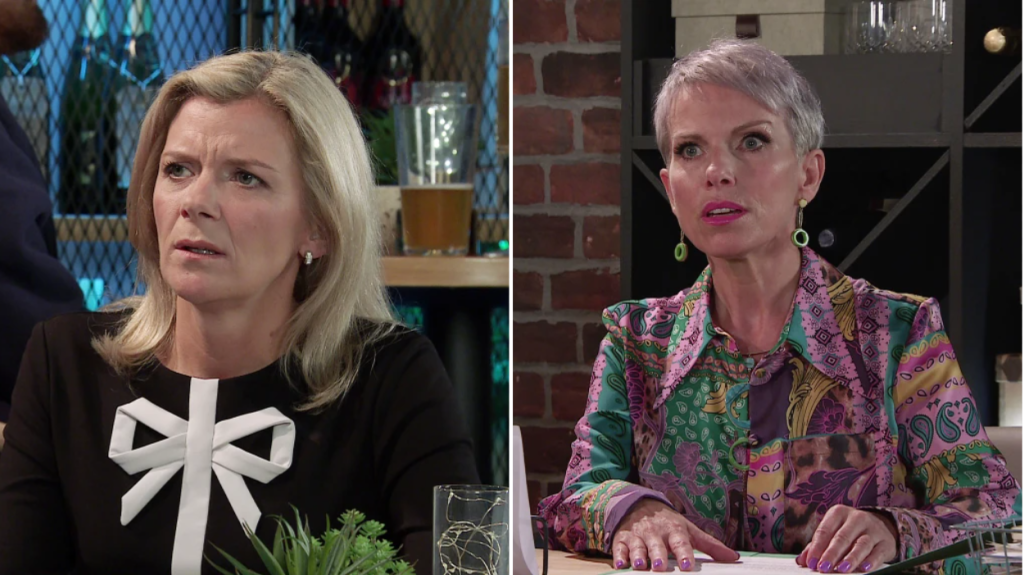 As Debbie Webster’s (Sue Devaney) money problems continue in Coronation Street, there’s a battle ahead between her and Leanne Battersby (Jane Danson).

We established that Debbie was pretty much broke back in the summer, when she staged a plan with Ryan (Ryan Prescott) to try and rob the bistro and claim on the insurance.

The plan went horribly wrong due to Ryan getting arrested and recently, Debbie told Ronnie (Vinta Morgan) that she’s only had two offers on her hotels.

Wanting to help out, Ronnie told his partner that she should sell her share of the bistro in order to avoid bankruptcy.

Desperate to not go under, Debbie told Nick (Ben Price) that she’s selling her half of the bistro and he’s got one week to make an offer.

So, with time ticking away, Nick and Leanne examined their finances, but realised they can only make Debbie a low offer.

As a new week gets underway, Debbie shows Lynne, a potential buyer, around the bistro and Leanne does her very best to sabotage.

Having found out about Leanne’s game, Debbie tells Nick and Leanne that she’ll force the sale of the whole bistro.

Just as Nick and Leanne reach a dead end, they will find help from someone very unlikely – Harvey (Will Mellor), who tells Nick he’s got some cash and wants him to use it on the restaurant.

But will he take the offer?

Lisandro Martinez was the subject of transfer interest from Arsenal in the summer (Picture: Getty) Edwin van der Sar has revealed Ajax didn’t even bother entering into negotiations with Arsenal over a potential transfer in the summer. The Gunners expressed interest in the Argentina international before switching their attentions to Oleksandr Zinchenko. Arsenal transfer chief […]

Hayley remains such a Corrie icon (Picture: ITV) She will forever be known as Hayley from Coronation Street to fans, and Julie Hesmondhalgh has revealed that at one point she thought she would be in the show forever. To mark the publication of her new book, An Actor’s Alphabet, Julie has been talking to the […]

The two pundits had a very tense exchange as they bickered on air (Picture: ITV Sport) Graeme Souness and Roy Keane were involved in a heated row during half-time of Argentina’s World Cup clash with Saudi Arabia as they argued over a penalty kick. The Copa America holders went into the half-time break with a […]