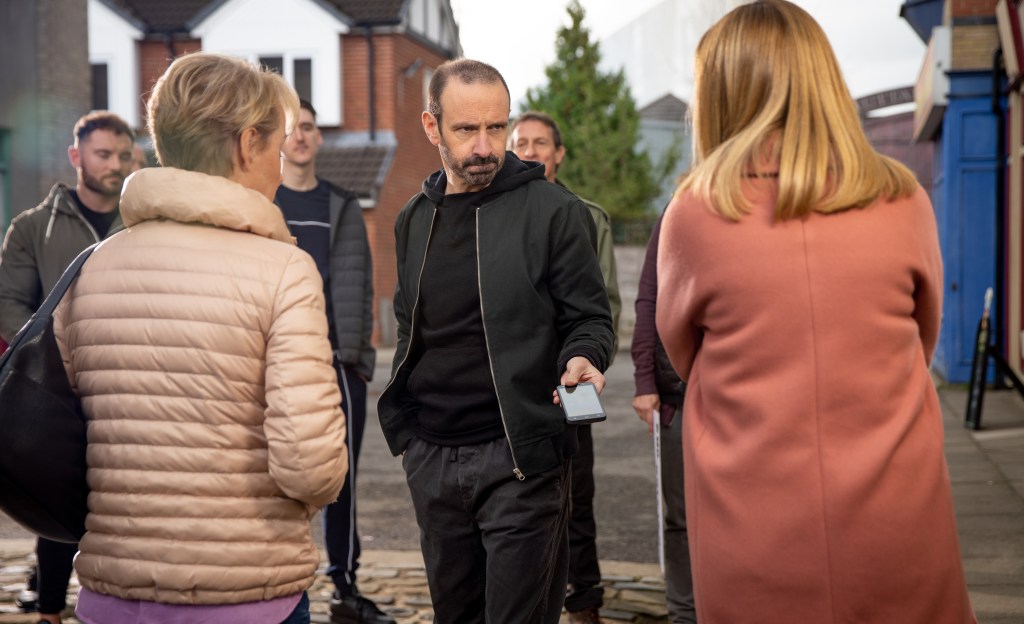 Coronation Street has been hit with 139 Ofcom complaints in relation to scenes of racist violence.

The show has a hard-hitting and controversial storyline focusing on the grooming of teenager Max Turner (Paddy Bever) into a far right extremism group.

The episode saw young refugee Daryan surrounded by vile thugs late at night, and then subjected to vulgar slurs and a beating.

In upcoming scenes, Max, who has been exploited by Griff’s propaganda of hate, starts spreading an anti-refugee petition.

In her role as a councillor, Maria Connor (Samia Longchambon) has been supporting local refugees, and is disgusted next week when the petition gathers signatures, proving the level of intolerance.

Griff has been very threatening to Maria – and anyone who speaks out against him. David Platt (Jack P Shepherd) has concerns about Max’s friendship with Griff, but has no idea of the level of danger that the youngster is in.

It’s only set to get worse, as scenes have been filmed on location of Max camping out with the extremist group, clearly as part of another violent and intimidating campaign.

Discussing the storyline, Coronation Street producer Iain MacLeod said: ‘Overall, Max’s story is one about the grooming of a vulnerable teenager at a point where he’s feeling most alienated and disenfranchised.

‘The story will encompass the “traditional” recruitment techniques of extremists groups, and we’ll see Max befriended in person by older, mentor-like figures that will give him a sense of loyalty and brotherhood.

‘Then, later in the story, we will explore a very 21st Century problem: teenagers self-radicalising through watching extreme content online.

‘In the end, we wanted this to be a story about communication within families – what are the right and wrong ways to talk to younger family members who are gravitating towards extreme views?

‘For the conclusion of the story, David’s misjudged attempts to deal with Max will drive the narrative to a shocking and thought-provoking climax.’

MORE : Julie Hesmondhalgh lost all ambition after being ‘devastated’ to leave Coronation Street

What is Ofcom and what does it cover?

Ofcom is the regulator for the communications services that we use and rely on each day.

The watchdog makes sure people get the best from their broadband, home phone and mobile services, as well as keeping an eye on TV and radio.

Ofcom deals with most content on television, radio and video-on-demand services, including the BBC. However, if your complaint is about something you saw or heard in a BBC programme, you may need to complain to the BBC first.

Its rules for television and radio programmes are set out in the Broadcasting Code.

The rules in the Broadcasting Code also apply to the BBC iPlayer.

This Broadcasting Code is the rule book that broadcasters …read more

FIFA 23 – just in time for the World Cup (pic: EA) This article contains affiliate links. We will earn a small commission on purchases made through one of these links but this never influences our experts’ opinions. Products are tested and reviewed independently of commercial initiatives. The Black Friday sales have brought down the […]

Leo has sent a big thank you to Chester Zoo (Picture: Jeff Kravitz/FilmMagic) Leonardo DiCaprio has expressed his gratitude to Chester Zoo after experts helped ‘resurrect’ a rare Mexican fish species. Despite being maintained in aquariums, the golden skiffia fish was declared extinct in the wild over 20 years ago. But thanks to the work […]