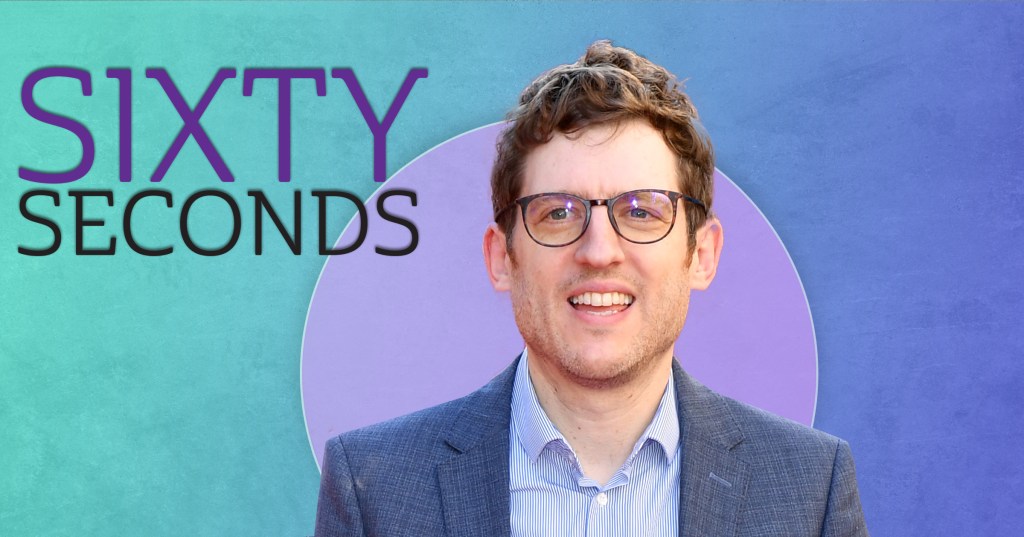 Elis James is back for a second series of Fantasy Football League (Picture: Rex)

Your reboot of Fantasy Football League alongside Matt Lucas was a huge success and it’s back for a second series.

I’ve been a fan of Matt’s since I saw him on Shooting Stars as a teenager and I’ve got to know him over the past few months. He’s fantastic to work with. I hadn’t realised how obsessed he is with Arsenal. This feels like one of those stories people tell about careers officers saying, ‘You’ll never get a job doing that. You need to knuckle down.’ We talk about ex-Arsenal winger Marc Overmars for 25 minutes and if one of us gets a line out of it you think, ‘That can go in the show.’ This is my job!

Wasn’t your mum a careers officer?

She was, yes. And in fairness to her, she never ever said that. She always said do what makes you happy. It’s a trope, isn’t it? ‘My teacher said I’d never get anywhere reading comics but now here I am playing Spider-Man!’

Frank Skinner of the original FFL said it ended because it got usurped by shows such as Soccer AM and Match Of The Day 2. What is different now?

A lot of football television now is based on trying to understand and analyse the game itself. As somebody who watches an awful lot of football matches, that’s not actually how people talk in pubs before and after the game.

Part of the charm of the original show was it was a very authentic portrayal almost of fanzine culture. It didn’t involve pundits. It didn’t involve ex-players. It was normal people with a deep love for the game being allowed to talk about something they had devoted their lives to.

Another strength of the original show, which we are trying to incorporate, was that it involved people who you didn’t expect to be on TV talking about football. I remember watching an episode that had Alison Moyet talking about Southend United. I had no idea that she loved Southend United. That was part of its charm.

In the case of you and Matt, how do Swansea City and Arsenal and, indeed, Wales and England, supporters rub along?

Swansea used to be Arsenal’s bogey team when we were in the Premier League. We had an awful lot of success at the Emirates. But it doesn’t matter. I think Matt would find it hard to do the show with a Spurs fan. The Wales/England thing doesn’t matter. We’re not going to do a Three Lions reboot!

Have you passed the football baton on to your own daughter?

Season two of Clarkson’s Farm will be available to stream early next month (Picture: Amazon) Jeremy Clarkson revealed that we shouldn’t be ‘fooled’ by Brian May after claiming that badgers are not ‘nice animals.’ The second installment of his Amazon Prime series about life on the farm is due to begin in February, where the […]

Erik Ten Hag: ‘Manchester United have to do everything to end trophy drought’

Erik Ten Hag (centre) and Manchester United, who have not won a trophy since 2017 (Picture: Getty) Erik Ten Hag has pledged to do everything in his power to help Manchester United end their worst trophy drought in 40 years, as they go into a Carabao Cup semi-final against Nottingham Forest tonight. United enjoyed an […]