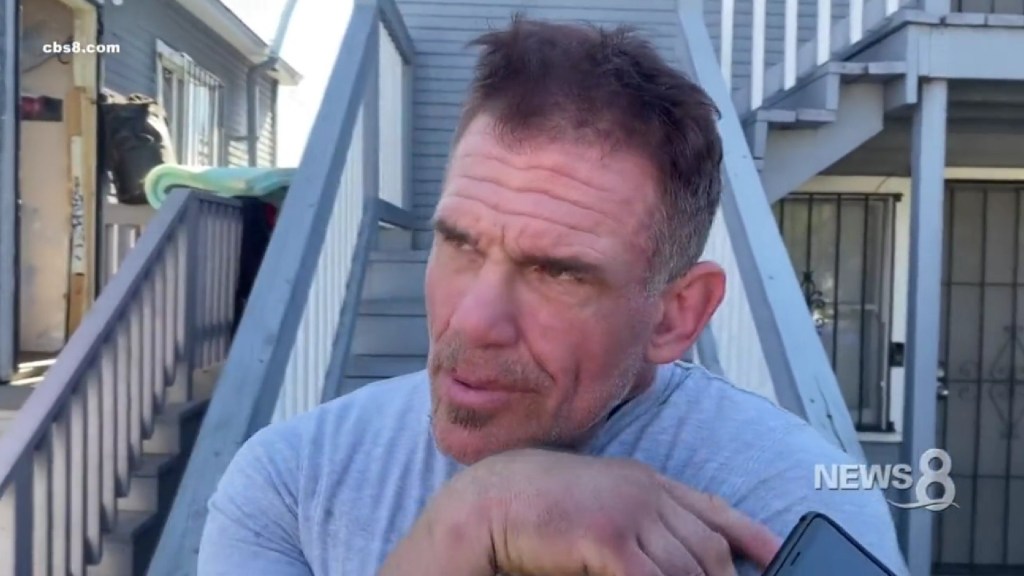 Aaron Brink has gone viral for a shocking interview he gave after his son Anderson Lee Aldrich was accused of killing five people in a LGBTQ night club (Picture: CBS News 8)

The father of the Colorado Springs shooting suspect was previously on multiple US TV shows speaking about his drug addiction and time as an adult film star.

His father, Aaron Brink, has now gone viral for a shock interview with CBS 8 News where he claimed he praised his son for being violent growing up, and appeared far more concerned Aldrich was at a gay bar than that he was accused of murdering five people.

In the interview, he recalled the moment he had been told Aldrich had been arrested, and said: ‘They started telling me about the incident, a shooting… I go on to find out it’s a gay bar. I got scared. “S***, is he gay?”

As clips from the interview began spreading on social media, viewers pointed out that Brink had been on television before – most notably for a 2009 episode of US series Intervention.

The father of the allege shooter spoke about his dislike for gay people and said he had praised his son for violence growing up (Picture: CBS 8)

His wife, Vanessa, talks about running out of options as she tries to deal with his addictions throughout the episode. And several years later the pair ended up on another US show: Divorce Court.

Brink spoke about his addiction and said he was now sober in an episode of Divorce Court (Picture: Divorce Court/ YouTube)

That episode saw Vanessa tell Judge Lynn Toler how his additions had impacted her life, including him taking her credit card to use crystal meth.

During the shocking interview with CBS 8, Brink said he had only recently learned his son was alive, having allegedly been told he had died by suicide in 2016.

Aldrich opened fire in an LGBTQ club before being …read more

Oscar will be getting a baby sibling (Picture: Instagram) Clarkson’s farm star Kaleb Cooper has said he’s ‘so excited’ to reveal his girlfriend Taya is expecting a second child. The farmer shot to fame on the Amazon Prime series, which follows former Top Gear presenter Jeremy Clarkson as he attempts to manage Oxfordshire farm Diddly […]