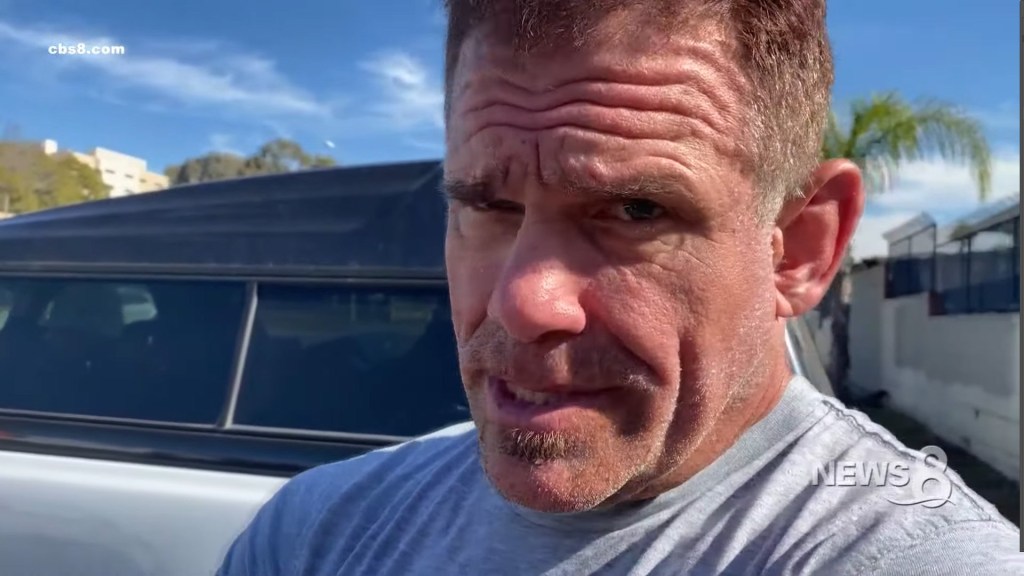 Aaron Brink has spoken about the mass shooting said to have involved his son (Picture:CBS 9)

The dad of the Colorado shooter who is accused of killing five people in a gay club said he was relieved to find out his son is ‘not gay’.

His son, Anderson Lee Aldrich, 22, has been accused of shooting five people dead and injuring 18 others in the massacre at a gay club in South Colorado at the weekend.

Speaking to CBS8, Brink said: ‘They started telling me about the incident, a shooting involving multiple people.

The Mormon Church has confirmed that while Aldrich was a member, he has not been active in some time, The Daily Beast reported.

The Colorado shooterâs dad on finding out his son murdered people: âThey started telling me about the incident, a shooting… And then I go on to find out itâs a gay bar. I got scared, âShit, is he gay?â And heâs not gay, so I said, phewâ¦ I am a conservative Republican.â (@CBS8) pic.twitter.com/7Zw4vpLtjE

He said he was relieved as he said his first thought was that his son was gay (Picture:CBS 9)

MORE : Battered face of gay club ‘gunman’ after being stopped by a dad and a drag queen

Aldrich opened fire at Club Q shortly before midnight on November 19 before he was subdued by two bystanders.

Aldrich was initially hospitalized with unspecific injuries but was transferred to the El Paso County Jail on Tuesday, according to authorities.

In Brink’s interview with CBS 8 he apologized for his son’s alleged actions and said that there was ‘no excuse for going and killing people.’

‘If you’re killing people, there’s something wrong, it’s not the answer,’ he said.

At the same time, Brink, who is a recovering methamphetamine user, ‘praised his son’s violent behavior.’

‘I told him it works, it is instant and you’ll get immediate results,’ he said.

Brink told the broadcaster that he didn’t know that his son was still alive.

He claims that Aldrich’s mother, Laura Voepel, had …read more

Strictly Come Dancing’s Fleur East is no stranger to reality TV, but how well did she do on The X Factor?

Will you be snapping up some Aldidas buys? (Picture: Getty/Aldi) Top budget store Aldi has sent social media into a frenzy by releasing their latest Adidas-inspired trainers and clothing range – dubbed ‘Aldidas’ by excited fans. The Aldimania range of casual sportswear went on sale online, to pre-order, today at 8am. The full range will be […]