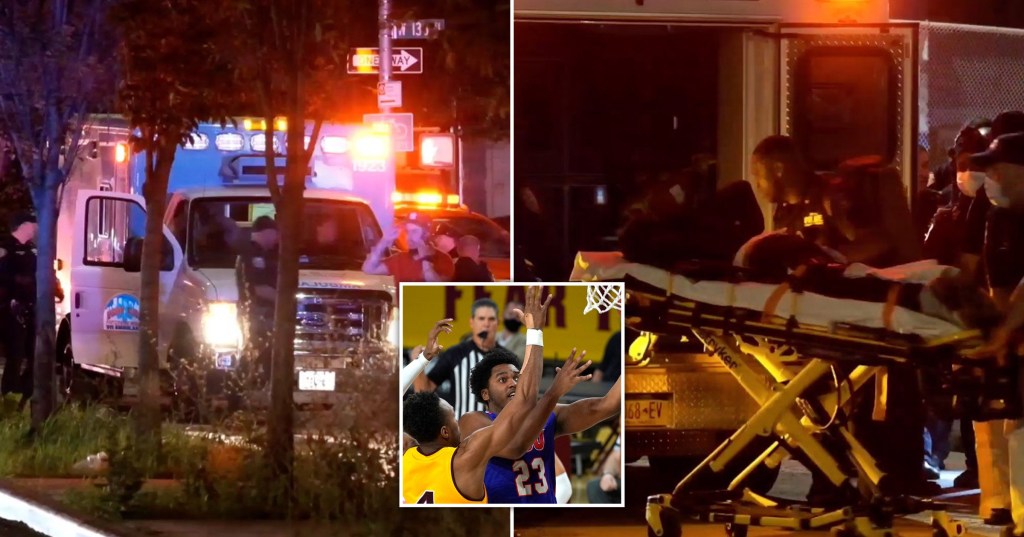 A 21-year-old college basketball player was killed and eight others were injured Monday in an shooting at a Father’s Day gathering in Harlem, New York City.

Darius Lee was among nine people shot at the gathering, which began Sunday and spilled into Monday morning, according to New York City police.

Lee, a Harlem native who stood at 6-feet-6-inches, was a senior at Houston Baptist University in Texas, served as a guard and a forward on the basketball team. Others injured in the shooting included six men and two women, police said.

Police responded to reports of a shooting Monday around 12.40am and found several people injured, while others involved in the shooting took themselves to the hospital.

‘This Father’s Day weekend is a weekend where people were supposed to be able to enjoy themselves with their families,’ NYPD Commissioner Keechant Sewell said during a news conference.

Police are still investigating the shooting, and have not shared information about possible suspects or motives behind the shooting. A gun was recovered at the scene.

The gathering was reportedly organized by Harlem rapper Rich Rhymer, who shared invitations to the event on his Instagram account. In the post he noted that his two prior cookouts had no violence, and wrote: ‘LETS GO FOR A 3PEAT,’ according to The New York Daily News.

Lee had just been named Houston Baptist University’s Male Student-Athlete of the Year, having led the team in scoring and rebounding last season. This season, he helped the team finish in sixth in the nation in steals per game, earning a second team All-Southland Conference selection.

He notably scored 52 points in a quadruple-overtime victory last season.

The university’s coach spoke on the player’s tragic death in a statement published to the school’s website.

‘We are in shock and cannot wrap our heads around this news,’ coach Ron Cottrell said. ‘My heart breaks for his mom, his sister and his entire family, and for our basketball team… As great of a basketball player he was, he was an even better person.’

A memorial has since been erected outside Lee’s home in Harlem, where locals have gathered to pay respects and mourn the slain basketball star.

Police are still investigating what caused the shooting. No arrests have been made.

Rory McIlroy has been hugely critical of LIV Golf since its emergence (Picture: Getty) Rory McIlroy has labelled LIV Golf rebels as ‘duplicitous’ after several PGA Tour stars performed a U-turn to join the circuit. On Wednesday, four-time major winner Brooks Koepka confirmed he was signing up to the Saudi-backed series despite only days ago […]

After being called ‘exotic’ and ‘tropical’ on dates, I’ve got White Guy Fatigue

I wasn’t acknowledged as a human being in my own right (Picture: lailawoozeer.com) ‘White Guy Fatigue’: The act or process of becoming disillusioned with dating white men, usually occurring over many years of lacklustre and/or problematic shenanigans involving white men. It’s a condition I’ve realised I suffer from – but I didn’t always feel this way. Growing […]