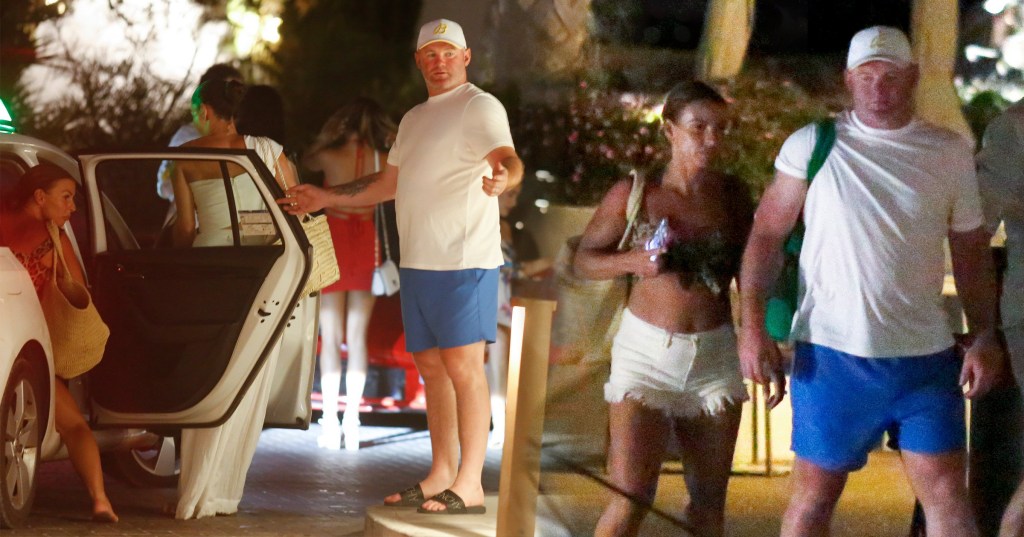 Coleen Rooney and her husband Wayne have been spotted putting the Wagatha Christie trial behind them as they enjoyed an idyllic holiday in Ibiza.

The couple jetted off and looked to be having an absolute blast as they partied with some pals in the street.

Coleen, 36, looked stunning as she showed off her tan, rocking a pair of white shorts with a leopard print crop top, going barefoot down the street.

She clutched a bottle of beer as she enjoyed the night with husband Wayne, 36, who donned a white T-shirt and blue shorts.

The football legend looked relaxed as he enjoyed the holiday, at one point holding a car door open for his wife.

On Sunday night, the pair were also spotted dining in the port of Ibiza and safe to say we’re getting some real holiday envy.

The couple have been jet-setting (Picture: Elkin Cabarcas / MEGA)

Coleen and Wayne have been jet-setting, after recently enjoying a family holiday to Dubai.

The mum-of-four shared a string of sweet snaps, including Wayne and sons Kai, 12, Klay, nine, Kit, six, and Cass, four, having fun on the beach.

‘We had the best Family holiday 2022. Dubai you were fantastic #grateful ❤️🥰,’ she wrote.

Meanwhile, Coleen and Wayne recently marked their 14th wedding anniversary, celebrating with an Ed Sheeran concert (how else?).

Thee trial verdict is yet to come back (Picture: REX/Shutterstock)

Coleen seems to be putting the trial behind her (Picture: Karwai Tang/WireImage)

TV presenter Coleen took to social media to express her love for the former professional footballer on their special day, sharing a smiley snap from warmer climates.

Of course, the famous pair met with Ed himself backstage after his gig at the Etihad Stadium finished, with Coleen sharing on Instagram that he was ‘amazing as always’, accompanying a group photo in which the songwriter posed with a cheeky thumbs up.

It comes after a tense court showdown with Rebekah Vardy and her husband Jamie Vardy, following claims that the fellow footballer’s wife leaked stories about Coleen to the press.

Their trial came to a close last month but a verdict is yet to be announced.

I’m so lucky I had time and space to learn (Picture: Benali Hamdache) ‘No trans person has ever joined, so why do we need to do this?’, a member of my university LGB group argued in 2007.  ‘Sexuality is different from gender,’ another member reasoned. While one said, ‘It’s just putting all the weirdos together’. […]

What disabled people want you to know about their sex lives: ‘There is a lot of ignorance about disabled bodies’

There are plenty of misconceptions about disability and sex (Picture: Metro.co.uk/Getty) Disabled people, of which there is an estimated one billion worldwide, often face additional barriers when it comes to sexual relationships and developing healthy consent practices.  Ableist sexual barriers include the desexualisation (assuming disabled people aren’t sexual beings) and infantilisation (disabled people being treated […]

How to join your union – and why you should

‘Union workplaces are safer and healthier’ (Picture: PA/Metro.co.uk) This week, the country has been plunged into travel chaos as thousands of members of RMT (the National Union of Rail, Maritime and Transport workers) go on strike.  While a lot of news coverage of the strikes has focused on the disruption this industrial action is causing – how it […]