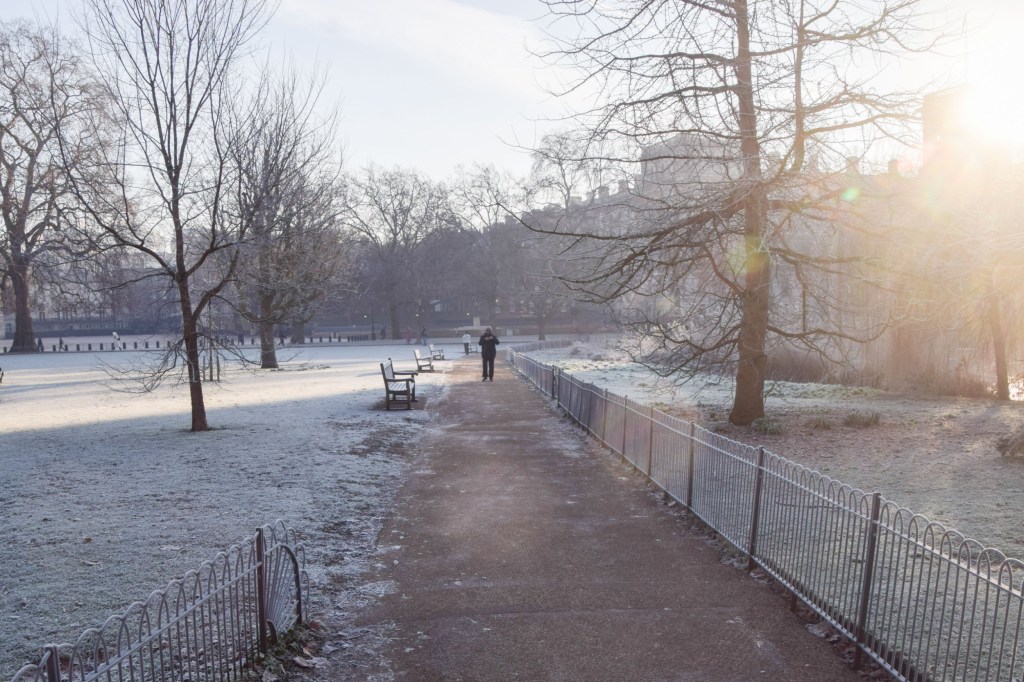 Parts of southern England will see temperatures hovering just above -10°C right up until Sunday.

Many of these areas will have woken up to freezing fog this morning, with some set to become eligible for cold weather payments.

These are made to vulnerable people, including pensioners, to help them pay for heating when the temperature dips below freezing.

It goes to those living in an area where the average temperature is recorded as, or forecast to be, 0°C or below over seven consecutive days.

Santon Downham, in Suffolk, plunged to -9.5°C on Sunday night, meaning many in the village will may well be among those in England and Wales eligible for the payment by the end of the week.

Parts of north-east England, Cumbria, west Wales and Oxfordshire have already seen these freezing temperatures for long enough to expect to see the money soon.

London is currently between 4°C and 5°C, dropping to 3°C tonight, with temperatures set to stay around these numbers until they start rising to about 7°C over the weekend.

Areas all over the country woke up to frost and fog amid freezing temperatures (Picture: Shutterstock)

Parts of a lake in London were completely frozen by this morning (Picture: Shutterstock)

Meanwhile, the Environment Agency has 34 flood warnings in place across England, urging action to prevent it.

Met Office forecaster Craig Snell said: ‘Across the south of England and Wales we’re still under the colder conditions, so there could be some fog again which will be quite slow to clear.

‘When there is cloud it’s going to feel pretty cold, but in the sunshine, although it will be cold, the sun will help negate the cold a little bit.’

Conversely, Northern Ireland, Scotland and far north-west areas of England are looking at fairly mild weather – albeit ‘rather cloudy and damp’.

Aberdeenshire could even see temperatures hit 12°C or 13°C.

Emma Raducanu also provided an update on her ankle injury (Picture: Getty) Emma Raducanu admits her second-round exit Australian Open to Coco Gauff ‘obviously sucks’ but is pleased with the progress she is making under her new coach Sebastian Sachs. The 20-year-old produced a strong performance against Gauff despite her defeat, creating two set-point opportunities […]

Netflix will allow primary account holders to add up to two additional users who won’t be served a validation code (Picture: Netflix) Enjoy your last few months of piggybacking on someone else’s Netflix account, as the company is finally cracking down on it. On Thursday, the streaming giant said that it was planning to expand […]