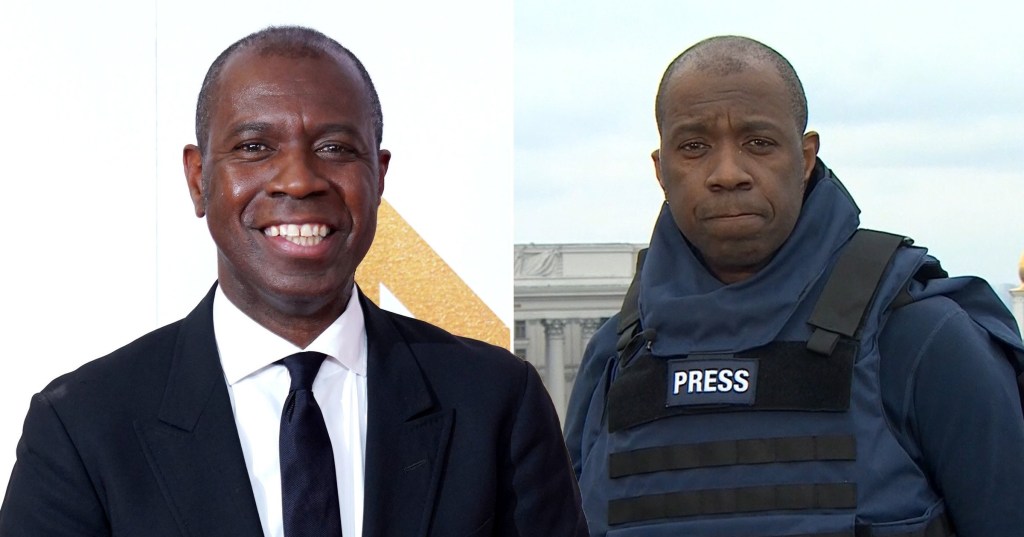 The foreign correspondent arrived in Kyiv the day before Russia’s invasion (Picture: BBC/PA)

Clive Myrie has revealed that he opted to stay in Ukraine as a reporter after the BBC gave him the option to return home the day after Russia’s invasion began.

The broadcaster and foreign correspondent had flown out to Kyiv the day before the invasion on a £29.99 flight and admitted that he didn’t expect Russia’s president, Vladimir Putin, to invade as he ‘didn’t see what he could hope to gain from it’.

However, on February 24, Russia attacked its neighbour in a massive escalation of the conflict that had been simmering since 2014.

Myrie’s BBC News at 10 broadcast was praised as he reported live on events, with viewers spotting him shed a tear – which he has since said was due to the wind as well as his emotion.

In a new interview, the veteran presenter shared that the BBC offered the chance to him and any crew members to return to the UK following the invasion, but he chose to stay.

He told the Daily Mail’s Weekend Magazine: ‘I made it clear I wanted to stay but I said to Kate Peters, our bureau chief, who had been in Moscow before, “Look, you know the Russians, if they come in here, are they going to kill us?”

The 57-year-old also spoke about his fans from appearances on shows such as Have I Got News For You?, as well as Mastermind – which he has hosted since last August – becoming worried after seeing him in Kyiv.

‘People forgot what I had done before and were like, “Oh my God, Clive, get off the roof! What are you doing there?”, and saying to the BBC, “Why are you sending him out there?”

He also recalled people worrying for him who only knew him as Mastermind host (Picture: BBC/Hindsight/Hat Trick Productions/William Cherry/Press Eye)

‘They were thinking, “What’s the guy from Mastermind doing in Ukraine?” It’s like Magnus Magnusson covering the fall of Saigon!’ he joked.

Myrie also admitted to being ‘prepared but also scared’ while out in Ukraine, as he spoke about the ‘element of hypertension and stress’ in a situation where ‘a missile could be fired from Russian soil and land anywhere’.

‘But I like to think I know what I’m doing,’ he added.

Myrie has worked at the BBC for over 20 years (Picture: Mike Marsland/WireImage)

Bobby Sproston was forced to sit on mum Amy’s lap to try and see after barriers blocked his view(Picture: SWNS) A six-year-old wheelchair user was left straining to see his basketball heroes over the barriers at the Commonwealth Games. Bobby Sproston, who suffered a spinal cord injury during his difficult birth, craned his neck in […]

The UK will be hosting Eurovision next year (Picture:Getty) Council officials have reported that there are currently no arenas with a gap in its listing to host Eurovision next year. Last month the BBC confirmed the UK would be taking charge of next year’s contest after it was previously announced winners Ukraine had been ruled out amid the […]

Sharon Osbourne has supported her husband Ozzy as he performed on-stage despite a number of recent health issues (Picture: Getty) Sharon Osbourne has shared a proud post after her husband, rocker Ozzy Osbourne, stunned audiences at the Commonwealth Games. The rock legend, 73, made a surprise appearance on stage at the closing ceremony of the […]