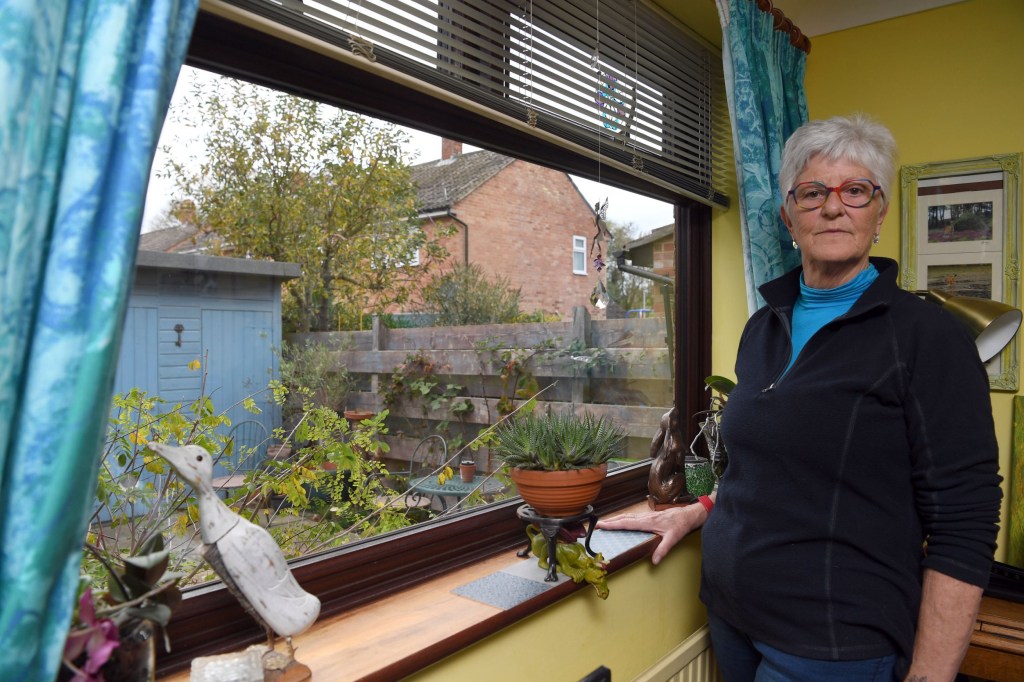 Karen Bull has informed friends she won’t be able to afford presents because of the botched work (Picture: Cambridge News/BPM Media)

A pensioner says she’s going to have to ‘cancel Christmas’ after being left £1,160 out of pocket by cowboy builders.

Karen Bull forked out to have guttering replaced and a leak fixed at her Cambridgeshire home last month.

The 69-year-old former NHS cancer researcher got a quote from what she thought was a trusted website but the work was a disaster.

Two tradesmen took the money and did the job but the leak was ‘worse than ever’ after they botched it, even causing water to gush into a neighbour’s home too.

Ms Bull said the water went from a drip to a pour because of the work and the builder’s didn’t show up when they were asked to come and fix it.

She said: ‘It was at that point that I was under so much stress that I wanted to curl up and die.

‘I really don’t know what made me break my rules and not go with someone I trusted.

‘Unfortunately it’s been an expensive month – repairing the car was £700, other emergency housework.

Traders said they could fix the leak but made it worse and left with the money (Picture: Cambridge News/BPM Media)

‘I didn’t want to withdraw anymore out of the equity of the house. I took away everything I have spare for this year, being on a simple pension and very little from the NHS.

‘I really hope these guys enjoy Christmas on my money because they’re gonna enjoy it a lot more than me this year.’

After she complained about the ‘trail of destruction’ left by the workmen, a good Samaritan offered to come and fix it for free.

Cambridgeshire and Peterborough Trading Standards said the individuals concerned were not officially registered to a company so they would ‘not be able to take the case further’.

A spokesperson for the organisation declined to comment on the case but said ‘we empathise with those who have been targeted by rogue traders and work hard to take action against these traders where possible’.

Musk also reportedly told the team that he had no intention of moving the company’s headquarters from San Francisco (Picture: Getty Images) After cutting Twitter’s 7,500-strong workforce to about 2,700, Elon Musk has confirmed that there will be no more layoffs. Musk announced that the company was done with layoffs and was actively recruiting for […]

Welcome to Britain’s least used railway station (Picture: PA) If you ever find yourself at Elton and Orston railway station, you are most likely on your larry. Nestled between its two namesake villages in rural Nottinghamshire, a grand total of 40 people used it over 12 months. It is served by just two trains every […]

Reports have been emerging from recently-liberated areas in Ukraine of Russian soldiers using torture rooms against civilians (Picture: Getty) Russians have murdered, tortured and kidnapped Ukrainians in a systematic pattern that could implicate Vladimir Putin’s top officials in war crimes, a US official has warned. US ambassador-at-large for Global Criminal Justice Beth Van Schaack stressed it is ‘very […]