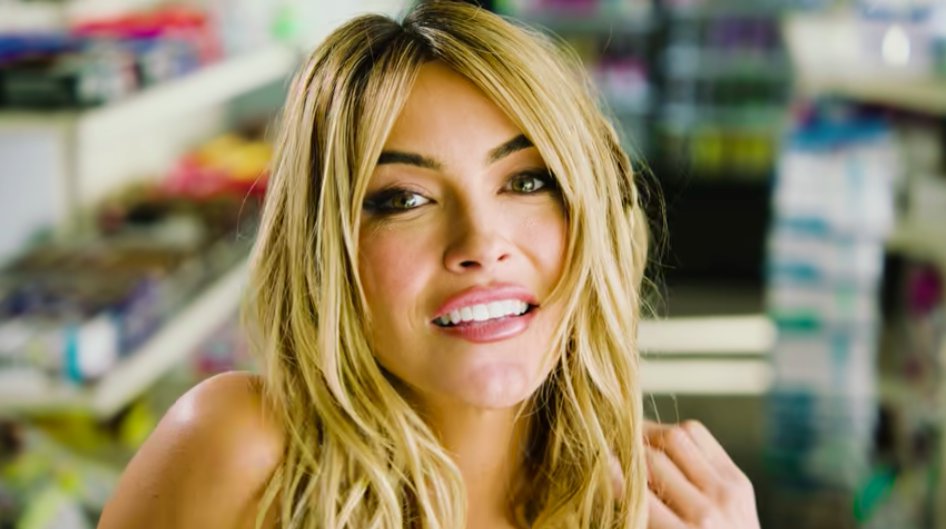 After confirming her relationship with artist G-Flip, Selling Sunset’s Chrishell Stause has really gone from one to 100 as the love interest in the singer’s latest music video Get Me Outta Here.

And from the leather dress, total dom vibes coming from the realtor, to the hot and heavy make-out sessions, we think we just need a minute to lie down.

Chrishell, 40, recently revealed she has a ‘deep connection’ with G-Flip, 27, and, well, that is more than evident as they got around a convenience store making out on the shelves and doing a little bit more making out on a couch before making out in the middle of a filming circle.

The song is a vibe too, no doubt.

Really reminding us she was an actress before venturing into real estate, Chrishell features prominently in the music video, also lip synching along to the track.

The PDA game is strong with these two, folks, and, by George the people are here for it.

One punter replied under the YouTube clip: ‘Chrishell giving v much dom fem n im here for it .. go queen.’

Giving our Selling Sunset icon all the support, another wrote: ‘AGGGHHH SCREAMING OKAY CHRISHELL LIVE YOUR BEST LIFE!!!!!!! AND THIS SONG IS GOOD!!!!!’

A little calmer, one mused: ‘Song is a banger and the chemistry is on point,’ as another chimed in: ‘G is awesome and Chrishell is the perfect video vixen. Rockstars all around.’

Explaining the message behind the song, G said: ‘GET ME OUTTA HERE was written about getting hurt by someone and then being so emotionally done with the drama that you just walk away, peace out, and have literally no f****s to give anymore.

‘It was an incredible shoot with an amazing team, including having Chrishell star in it with me. And, I’m proud to say 80% of the crew on set for the video are queer.’

During the explosive Selling Sunset season five reunion, Chrishelll finally confirmed she was dating the Australian musician after her split from Jason Oppenheim, which stunned no one more than Maya Vander.

STALKER 2 back in development – don’t expect a December release

We can’t get enough of the ‘enemies to lovers’ romcom trope – but can it ever work in real life?

We love watching people go from hating to loving each other (Picture: Getty) Romcoms love a cliché. Whether it’s the friends that realise they are in love with each other, the love triangle, the forbidden love, or falling for the person they used to make their ex jealous – the predictable storylines are part of […]