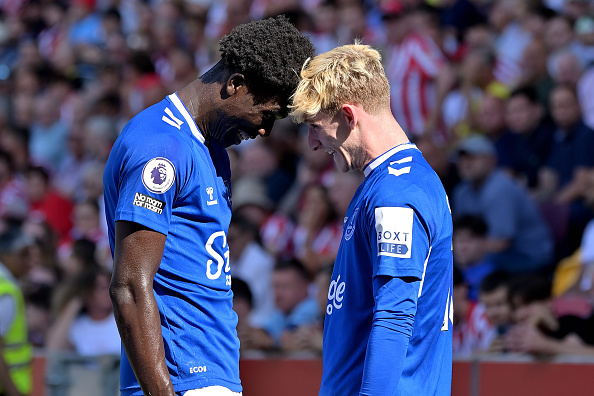 Chelsea will explore deals for the Everton stars (Picture: Getty)

Chelsea have renewed their interest in signing Anthony Gordon and are also considering a move for his Everton teammate Amadou Onana this month.

The Blues chased a deal for the England Under-21 international during the summer transfer window and were reportedly ready to pay up to £60million to bring the forward to Stamford Bridge.

Gordon remained on Merseyside but according to The Telegraph, Chelsea have shown interest once again in what could be a frantic end to the January transfer window.

Everton are in crisis with the club sacking Frank Lampard on Monday afternoon, sat 19th in the Premier League table with just goal difference keeping them off the bottom.

Chelsea will look to take advantage and raid the Toffees for Gordon, with the report claiming he is now expected to leave Goodison Park before the window closes.

The Blues could consider loaning Gordon back to Everton for the remainder of the season with the club deep in a relegation fight but they will also explore a deal to sign midfielder Onana.

The Belgium international has been one of the few positives for Everton this season since joining the club from Lille in a deal worth £33million in the summer.

The Merseyside club would be ‘highly reluctant’ to sell Onana this month but Chelsea are aware of Everton’s need to raise cash to meet Financial Fair Play regulations.

Chelsea’s spending has been rampant this month with their biggest piece of business to date the £88m signing of Mkyhailo Mudryk, signed from under the noses of Arsenal and making his debut off the bench against Liverpool on Saturday.

Joao Felix has also joined from Atletico Madrid on loan after Chelsea agreed to pay a fee of £9m for the deal until the end of the season, taking their winter spending to around £160m.

Having seen offers turned away earlier this month, they are also preparing another move for Enzo Fernandez, with Benfica adamant he will not leave them for a penny less than his £105m release clause.

Chelsea are also ready to launch a bid to sign Lyon right-back Malo Gusto, who they believe can provide ideal cover for Reece James.

MORE : Chelsea have not given up on signing Enzo Fernandez this month with club preparing new offer for Benfica star

The players who …read more

‘It’s an absolute tip’ (Picture: ITV) A Love Island worker has revealed the villa is usually an ‘absolute tip’, with ‘used tampons’ left around in a previous series. It’s no secret that the Love Island toilets and showers aren’t the most glamorous, with previous contestants having spoken about how disgusting they can get – especially […]

Bioengineers manage to grow skin in the shape of hands