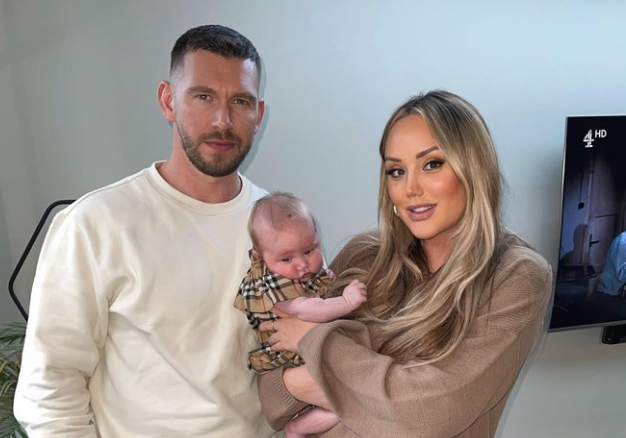 New parents Charlotte and Jake are looking forward to life together (Picture: Instagram/charlottegshore)

Charlotte Crosby has shared how she has ‘got the bug’ of having babies and ‘can’t wait’ to have another one after giving birth 10 weeks ago.

The Geordie Shore star welcomed little Alba into the world in October last year, and she is the happiest she’s ever been.

But the 32-year-old isn’t pulling the brakes on new excitements anytime soon, as she hinted she’s impatient for another baby with boyfriend Jake Ankers – and marriage.

‘I already can’t wait to have another baby. I’ve got the bug now!’ she told OK Magazine, before she confessed Jake ‘already knows the ring design and my finger size, he just needs to ask the question!’.

This comes as businessman Jake forays into the spotlight with his celeb girlfriend in their documentary series, Charlotte in Sunderland, which will follow the new parents navigating life.

The star seems to be coping remarkably well as a new mum, as she admitted to being the calm one in the relationship, with Jake sometimes getting a little impatient with parenting logistics like car seats.

Charlotte has shared her plans for the future (Picture: Instagram/charlottegshore)

But becoming parents has brought them closer, as the star confessed to having ‘never loved him more’.

The pair got together in January 2022, and Charlotte declared at the time that she’d had the best ‘January ever’.

The baby arrived at a particularly poignant time in Charlotte’s life, as her grandma, who is Alba’s namesake, died in November last year, just after her birth.

Charlotte shared this sentiment on her Instagram alongside a photo of baby Alba, when she wrote: ‘EVERYTIME I look at my beautiful little Alba Jean and I say her name I’m reminded of my amazing nana. This little girl has been the biggest shining light in this time for me and my family ❤️😍🥰 on my saddest days she makes me smile and that’s just too special not to share with you all….’

Charlotte was devastated over the death of her grandma, who she named her first-born after (Picture: Instagram/charlottegshore)

The process of becoming a mum has ‘100%’ changed aspects of Charlotte, according to the star.

Aside from the obvious growing up that comes with parenthood, fans were shocked when after an almost decade-long love affair with lip fillers, Charlotte got them dissolved before the arrival of her little girl.

Explaining the cosmetic move on Nova Podcast’s Charlotte Crosby: Always On, the Geordie said: ‘I did not get my lips dissolved because of trolls because, quite frankly, I’ve been trolled for so long about them, and I did not care.’

But instead, with a big dose of her trademark sense of humour, Charlotte wondered whether her daughter could even see her making silly noises and playing with her ‘under them humongous lips’, so they had to go.

It’s no secret Charlotte has suffered some serious appearance trolls over the years, but the …read more

https://www.instagram.com/p/CoSm8tZDOap/ Former Coronation Street star Helen Flanagan loves being a mum to her three young children, but the actress has admitted on Instagram that motherhood came with some unwanted side effects – which she’s taken steps to rectify. Breastfeeding three babies had taken its toll on her boobs, Helen explained. ‘I breastfed in total for […]

Home sweet home (Picture: MediaDrumImages/ChantelLatham) DIY can result in big returns, as one couple found out when they transformed their home with a budget of just £3,000, increasing its value by almost £70,000. Senior care assistant Chantel Latham, 37, from North Devon, moved into her three-bedroom home in October 2020 with fiance Benjamin, 28, and […]