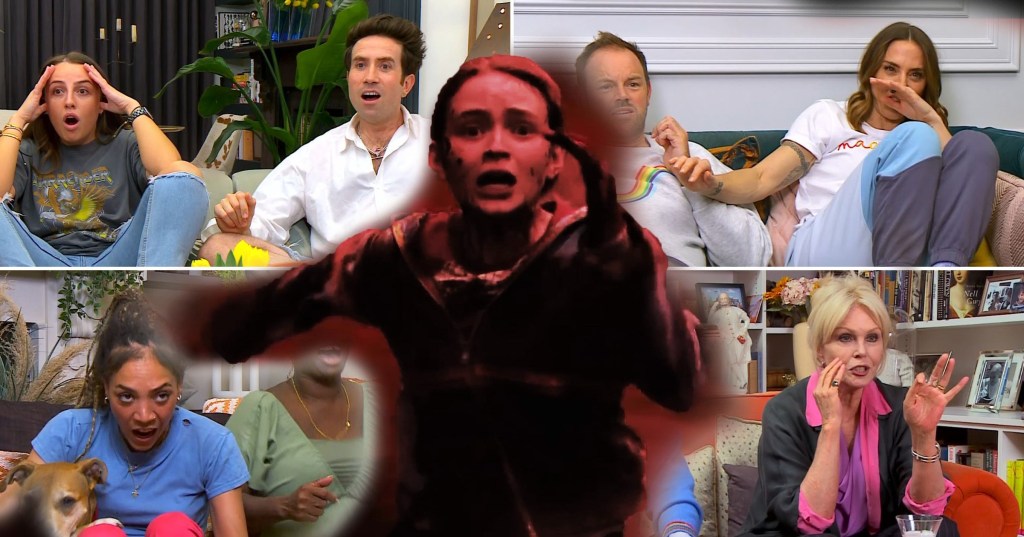 The stars were on the edge of their sofas watching tense scenes unfold (Picture: Channel 4/Netflix)

The following article contains spoilers for S4 of Stranger Things.

Stars were on the edge of their sofas as they watched the drama unfold in season 4 of the Netflix show, with Rylan Clark in particular lost for words over ‘the power of Kate Bush.’

Tense scenes showed character Max (played by Sadie Sink) taken into a trance by evil Vecna, while her friends struggled to save her by frantically searching for her favourite song to play in her cassette player.

Just as it seemed Max was lost forever and was about to be strangled by the villain, the group pressed play on 80s hit Running Up That Hill by Kate Bush, and she was able to free herself from the trance, using fond memories of her loved ones to spur her on.

After music icon Kate basically became the reason Max lived and was able to escape the Upside Down, the Gogglebox cast all let out sighs of relief, with some surprising themselves as they became emotional at the gripping scenes.

Nick Grimshaw and niece Liv were in bits as the drama unfolded (Picture: Channel 4)

Mel C got ‘totes emosh’ after Max was reunited with her friends (Picture: Channel 4)

‘Kate Bush can get you out of this,’ said Miquita Oliver, while Spice Girl Melanie said: ‘I’m actually going to cry, I’ve got totes emosh.’

It wasn’t long until Nick and his niece Liv were also tearing up, after Max was saved and her pals wrapped protective arms around her.

‘Just to think, if it weren’t for Kate Bush, she’d be dead’, Rylan said.

‘The power of Kate,’ added Miquita, who continued: ‘But also, the power of friendship, knowing who you are, and running back to yourself.’

Musician Kate made history this week by securing the number one spot in the singles chart with Running Up That Hill, a staggering 37 years after the track was released.

Zoe Ball could not watch as she hit behind her son, awaiting the fate of beloved Max (Picture: Channel 4)

Dame Joanna Lumely was willing for Max to make it (Picture: Channel 4)

Thanks to Stranger Things and that dramatic moment when we almost lost Max to Vecna, the song has gone viral on TikTok and been taken into the hearts of a whole new generation.

The song dethroned As It Was by Harry Styles, which sat pretty at the top spot for a mega 11 weeks.

It was confirmed by the Official Charts Company confirmed on Friday that the iconic New Wave track had helped Kate achieve no less than three all-time records simultaneously.

With 44 years between her 1978 number one Wuthering Heights and her 2022 number one Running Up That Hill, she now boasts the longest-ever gap between …read more

Why has Bargain Hunt’s Colin Young grown his hair?

It’s important to talk (Picture: CALM/PA) Mental health issues aren’t easy to see. Trigger warning: this article contains frank discussions of suicide. Suicide prevention charity Campaign Against Living Miserably (CALM) reveals that 61% of people would struggle to tell if someone they knew felt suicidal, according to their new research.  The ‘face of suicide’ isn’t […]

Who has left Love Island 2022? All the dumped contestants so far

The cast of Love Island have given us plenty to talk about already (Picture: ITV) Love Island’s only just got going, but there’s been no shortage of gripping and surprising moments. Fans of the ITV2 dating show have seen a walk-out, contestant Gemma Owen’s ex walking in, and plenty of steamy smooches. And, with several […]