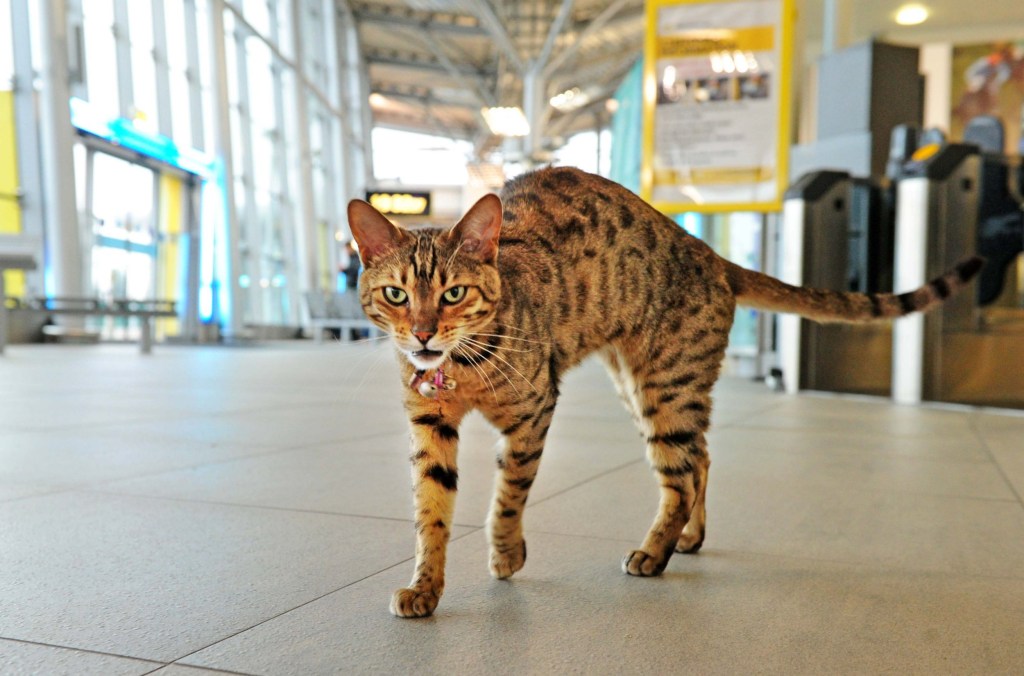 Last April Paul managed to get onto the roof of a platform, causing concerns for staff (Picture: Liverpool Echo)

Last April Paul managed to get onto the roof of a platform, causing concerns for staff (Picture: Liverpool Echo)

A hugely popular cat who became ‘the face of Liverpool South Parkway Station’ has died.

A dedicated Facebook page for the feline – who was named ‘Paul Newman’ after the iconic American actor – posted: ‘It is with a heavy heart I must announce that Paul the cat has journeyed over Rainbow Bridge. I know you will all miss him just as I will.

‘My heart goes out to Steff his owner and all of his colleagues at South Parkway who will miss him.’

The bengal cat began visiting Liverpool South Parkway Station from his nearby home 13 years ago.

He would lounge around the platform barriers, drawing attention and affection from passing commuters and station staff.

But Paul’s time at the station wasn’t without drama.

In 2013 Paul lost popularity among the station’s staff after biting a security guard. The station responded by ‘discouraging’ him from returning, although it refused to ban him.

Last April, he managed to get onto the roof of a platform, causing concerns for staff and prompting the Facebook page to provide panicky rolling updates.

Eventually Paul came back down to the station floor for a drink of water and staff breathed a collective sigh of relief.

Tributes to Paul have been posted on social media.

Layla Shaughnessy wrote: ‘RIP Paul. I loved giving him a little stroke when coming home from work – he was a wonderful, mischievous boy. Sleep tight.’

Perhaps the most moving tribute so far has come from Daniel James Findlay-Belfield, who wrote: ‘I will never forget how he helped me get through a very dark time in my life a few years ago. The happiness he gave to so many people, including myself, will never be forgotten. He was a Legend and I will miss him so much.’

MORE : How to keep your cat safe in cold weather

MORE : Couple from Liverpool ditch city life to live in a van for less than £500 per month

To view this video please enable JavaScript, and consider upgrading to a web browser that supports HTML5 video Ellen DeGeneres wasn’t the birthday girl but she got the biggest gift nonetheless, with wife Portia de Rossi casually springing a wedding vow renewal on her.  Portia celebrated her 50th birthday on Tuesday and hosted a party […]

Heartfelt tributes have been made to the late American Graffiti star (Picture: Universal Pictures / Avalon) Cindy Williams, best-known for starring in Happy Days and its spin-off Laverne & Shirley, has died at the age of 75. Her death was confirmed by her family’s spokesperson, Liza Cranis, who explained in a statement that she had […]

Banish those winter blues and create a fresh new look

From interiors to salt and pepper shakers, try a fresh new look for the new year (Picture: Supplied/Metro) This article contains affiliate links. We will earn a small commission on purchases made through one of these links but this never influences our experts’ opinions. Products are tested and reviewed independently of commercial initiatives. UK weather […]