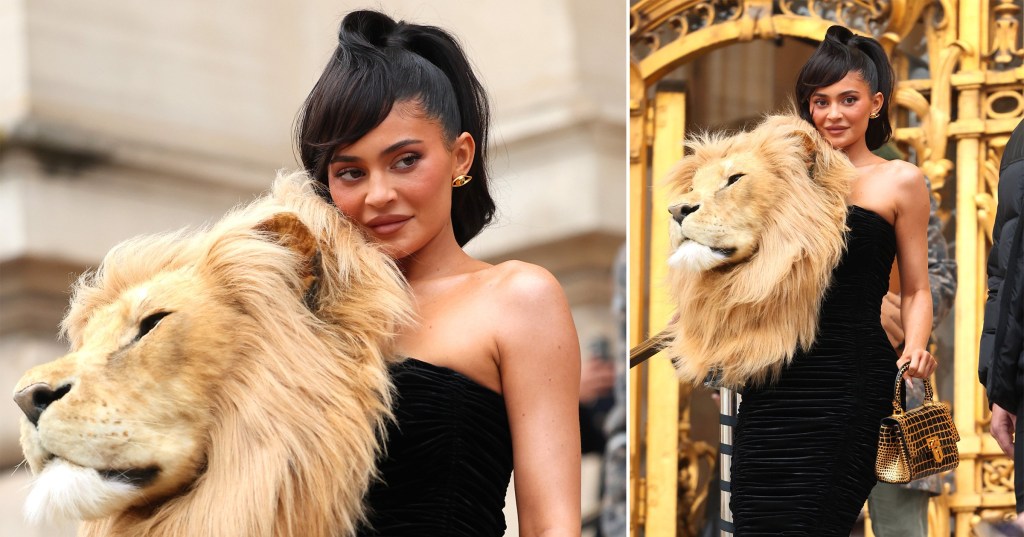 Kylie Jenner is continuing to face backlash for the realistic lion’s head dress she wore to the Paris fashion week Schiaparelli show, with the likes of Carrie Johnson and Lorraine Kelly voicing their disgust.

The reality star, 25, turned heads as she sat at the front row by the catwalk in the dress, with the incredibly realistic lion’s head protruding from the front.

As Kylie watched, several versions of the dress debuted on the catwalk, including a wolf’s head dress worn by supermodel Naomi Campbell

Mum-of-two Kylie and fashion house Schiaparelli faced some backlash from fans as they were accused of ‘promoting trophy hunting’ and ‘animal cruelty’ by donning the animal heads.

The company took to social media where they assured those concerned that the animal heads were made from faux fur and foam, and that no animals were harmed in the making of the dresses.

However the Keeping Up With The Kardashians star was praised by animal rights charity Peta, with president Ingrid Newkirk telling Metro.co.uk the looks ‘celebrate the beauty of wild animals and may be a statement against trophy hunting.’

The divide in opinion has seen high-profile figures speak out against the dress, with chat show host Lorraine Kelly referencing the lion’s head dress on her show and suggesting it seemed as though it was ‘promoting trophy hunting.’

While some accused the dress of promoting trophy hunting, Peta praised the star for making a statement against it (Picture: Shutterstock)

‘It’s so lifelike, and actually incredibly disturbing,’ she said on Tuesday’s episode of the ITV chat show.

She went on to backtrack slightly, musing that ‘if it’s got people talking about trophy hunting then it’s a good thing actually – but it is incredibly disturbing.’

Johnson shared a photo from the fashion show to her Instagram page and write that it was ‘grim,’ adding: ‘Real or fake this just promotes trophy hunting. Yuck.’

Lorraine Kelly said it was ‘incredibly disturbing’ but if it was sparking a conversation around trophy hunting then it was probably a good thing (Picture: Getty Images)

He compared being outraged at the fake but realistic animal heads, to being offended at fake meat vegetarian burgers or the Wesst End production of The Lion King.

While animal rights organisation Peta were fans of the embroidered animal heads, they urged Schiaparelli and Kylie to take it one step further and stop the use of other animal products in fashion.

In their statement to Metro.co.uk, they continued: ‘Peta urges Kylie and the others to extend this creativity to exclude sheep shorn bloody for wool and silkworms boiled alive in their cocoons.

Want to eat healthier? Get to grips with the calories and content of your food

Condiments and sauces can be packed with sugar and calories, says nutritionist Amanda Hamilton (Picture: Alamy) Lots of us embarked on a healthy eating plan at the start of the year, but do you really know the calorie and nutrition content of the food you’re eating? According to a survey from food tracking app MyFitnessPal, […]

Giovanni Pernice opened up about his plans for the future (Picture: Shutterstock) Giovanni Pernice revealed he was open to having children amid confirmation of his blossoming romance with fellow dancer Jowita Pryzstal.  The 32-year-old Strictly Come Dancing star has appeared on the series since 2015 and has shared news of his latest romantic entanglement with […]

Atrioc has admitted to the situation (pic: Twitch/Metro.co.uk) Top streamers xQc, Adept and MoistCr1TiKaL are amongst those criticising Atrioc for buying fake nude photos of female creators. Twitch streamer Atrioc has come under fire after it was revealed that he visited a pornographic website which sells deepfakes of fellow content creators.  Such websites usually create […]