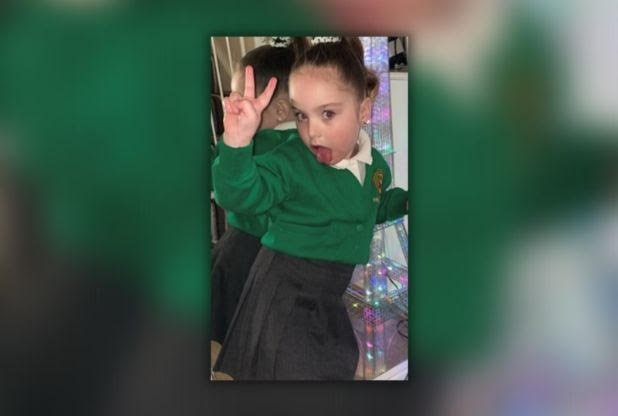 A three-year-old girl died after the car she was in collided with a Porsche Boxster that was ‘travelling the wrong way down the M6’.

Faye Dawson, who was travelling with her mum and one other passenger, died on Saturday after the crash.

The two other occupants of the car remain in hospital with serious injuries.

A 79-year-old man who was driving the Porsche Boxster also died.

Young Faye, from Wallasey, Merseyside, was travelling in a Vauxhall Meriva on the southbound carriageway between junctions 28 and 29.

Police have said they suspect the 79-year-old’s Porsche was travelling the wrong direction, having entered the motorway at junction 28 via the southbound slip road.

Faye’s heartbroken family have paid tribute to the ‘loving and caring’ little girl who ‘was loved by everyone who met her’.

They said: ‘Our beautiful Faye Grace, words will never express the heartache we are all going through since you were tragically taken from us. We can’t see the future without you, it has left a massive hole in our lives.

‘Everyone says how precious their daughter/granddaughter is but you were an exception, you were such a clever little girl who was very funny and had us all laughing all the time.

The crash occurred on the southbound carriageway between junctions 28 and 29 (Picture: Google)

‘You were so loving and caring and above all very loved by everyone who met you. You’re now at rest with your great nanny, great grandad and Uncle Jimmy. Words won’t justify how much we are all going to miss you and how much we all love you.’

The family also mentioned her mother, who is still recovering in hospital.

‘Your mummy is being so brave and she will continue to make you proud. You were too little to be taken away from us, but we know the angels will look after you and they’re lucky to have you dancing in the sky with them.

‘We are all so heartbroken that you were taken far too young but we are so glad that we got to have you for the time we did. RIP baby girl, we are all missing you and will carry on forever. All our love.’

Lancashire police have issued a new appeal for witnesses to come forward, particularly anyone with a dashboard camera.

Sergeant Craig Booth, of the Serious Collision Investigation Unit, said: ‘This collision has left both families grieving in a way most of us will never understand.

‘On behalf of Lancashire Police and the investigation team I would like them to know our thoughts are with them all, they are being supported by specially trained officers as a result of this …read more

Aldi shopper’s £24.99 Christmas tree ‘fell to pieces’ as soon as she opened it

The Christmas tree shredded all of its needles when it was taken out of the wrapping (Picture: Ginny Zieba/Deadline News) It’s beginning to look a lot like Christmas in living rooms across the UK – but one woman is feeling anything but festive. Ginny Zieba, from Stockport, says her Christmas tree she bought from Aldi […]

Prince Andrew pictured at the Ascot races with the Crown Prince of Bahrain in 2020 (Picture: WireImage) Prince Andrew has reportedly made an unannounced visit to Bahrain following claims he is plotting a new role as a UK trade representative. The disgraced Duke is said to have flown to the Gulf state this week on […]

What’s the record for goals scored in a single World Cup game?