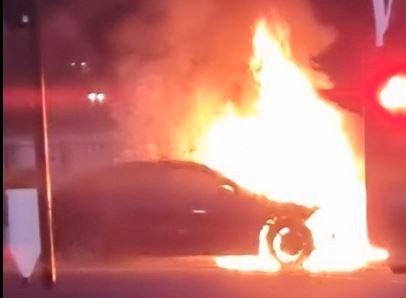 A car burst into flames after crashing into railings outside Buckingham Palace.

Footage shows the black saloon car on fire with thick smoke billowing out from its bonnet.

Police and the fire service rushed to the scene, beside Canada Gate at the western end of The Mall, at around 7.20am on Saturday.

The incident is not thought to be terror related.

The driver of the car, who is in his twenties, was not seriously injured in the crash.

Hotel worker Oliver Aladi, 21, was returning from a night shift when he saw the flames from the burning vehicle.

He said: ‘The ground was pretty wet so maybe it slipped.

‘There were not many cars around at that time in the morning so maybe it lost control and went straight into the barrier.

Emergency service workers could be heard telling cyclists to turn back from the scene (Picture: SWNS)

Firefighters managed to extinguish the flames and the driver escaped without serious injuries (Picture: Oliver Aladi/SWNS)

‘I think it was a Mercedes or BMW.’

He added: ‘The front of the car crashed into the barrier near the bike lane.

‘I don’t know if that’s what caused the fire, by the time I got there it was already up in flames.’

A spokesperson for the Metropolitan Police said: ‘At around 7.20am on Saturday, January 21 a car collided with railings by Canada Gate, in The Mall SW1.

‘LFB were requested after the car caught fire. Road closures were put in place.

‘The driver, a man aged in his 20s, suffered no serious injuries.

‘The incident is not being treated as suspicious.’

Alex Murdaugh (right) tears up after the jury is excused and the defense and prosecution teams discuss how to handle sensitive crime scene photos during his double murder trial (Picture: AP) A disgraced lawyer wept at the start of his trial around the murders of his wife and son, as prosecutors said a ‘family weapon’ […]

Since leaving the Love Island villa, Haris has learnt about the video being released (Picture: ITV/ Vincent Dolman/ Shutterstock) He was dumped from the Love Island villa tonight and now Haris Namani has shared he is ‘devastated’ to learn a video of him being involved in a street fight was released in recent days. The […]

Three shot dead at convenience store, suspect in stand off with SWAT team

Jarid Haddock was identified as the man suspected of shooting and killing three people at a Yakima, Washington convenience story early this morning (Picture: AP) Three people were shot and killed at a convenience store overnight in Washington, police said on Tuesday. At 3.30am on Tuesday morning, police received a 911 call reporting a man […]