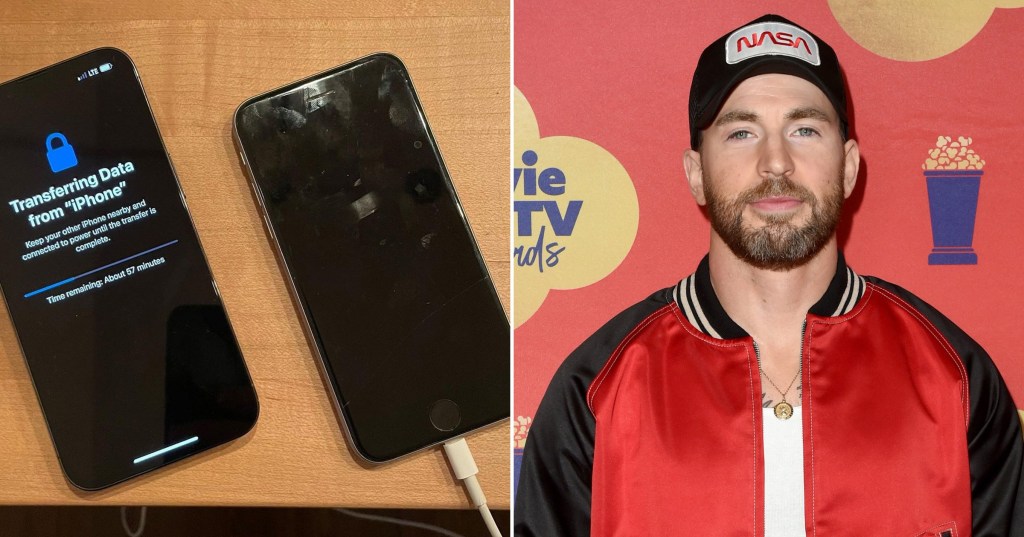 Chris Evans has finally upgraded from the iPhone 6s he has had since 2015 and is looking forward to not having grainy photos anymore.

The Captain America actor, 41, took to Instagram and Twitter to document the historic moment as he transferred all of his data onto his new phone.

He told his followers: ‘RIP iPhone 6s. We had a good run. I’ll miss your home button.

‘I won’t miss the nightly battle of trying to get you to charge. Or your grainy pictures. Or your sudden drops from 100% battery, to 15%, to completely dead all within minutes.’

Fans were, of course, horrified to find out the Marvel star was still using the same phone from 2015, joking that he had been frozen in ice like his character had been for 70 years.

Kate Beckinsale commented: ‘Not the grainy pictures’, while Yvette Nicole Brown added: ‘Please tell me you didn’t still have the 6?! HOW did that happen to you?!’

Octavia Spencer admitted she was in the same boat, explaining: ‘OMG! I just gave up my home button last week. Transitioning to the 13 has been easier than I thought. So…. #IFeelYouBuddy.’

Fans added: ‘Took the Captain America role a little too serious with the ancient phone’ and ‘It’s the end of an era. You did great, sweetie.’

Some even questioned how Chris had taken the photo of his old and new phone as both were in the photograph he had posted showing the data transfer.

Chris appears to have chosen an iPhone 13 for his upgrade, which he will likely still be using in 2029 if his past habits are anything to go by…

Olympia is the younger sister of Holly Valance (Picture: Olympia Valance/Instagram) Olympia Valance, who plays Paige Smith in Australian soap Neighbours, has tied the knot with AFL star Tom Bellchambers after a two-year-long engagement.  The pair confirmed their relationship back in 2019 after meeting on the exclusive dating app Raya, before revealing they had become […]

When is it too hot to walk your dog?

The weather is hotting up for us and also our four-legged friends (Picture: Getty Images) June has brought with it some record high temperatures, with the hottest day of the year already recorded with temperatures of 32.4°C. As we all try to find ways to deal with the heat, spare a thought for how hot […]

Mark Wright and Michelle Keegan’s mansion is almost complete (Picture: Instagram @wrightyhome) Mark Wright has revealed one of the final transformations at the mansion he and Michelle Keegan built from scratch, as their lavish driveway was completed.  The former Towie star, 35, shared a slick transition video on the couple’s home Instagram account, showing the […]