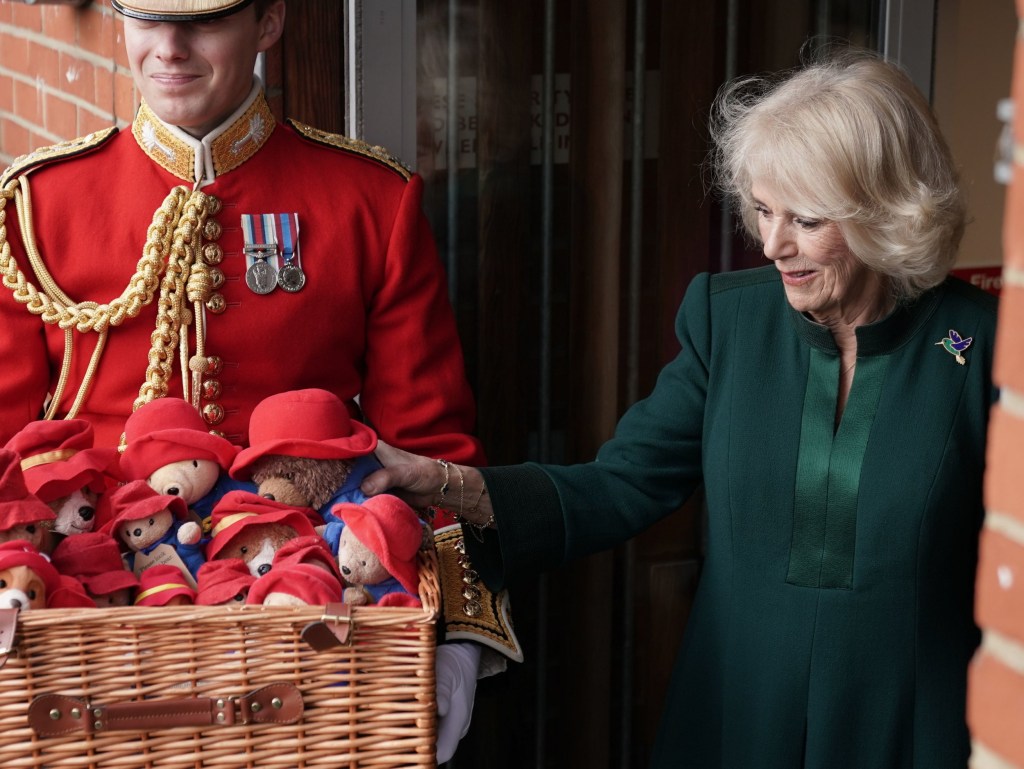 If you’d gone down to East London today, you’d have been in for a royal surprise.

She donated various toys which had been left as tributes in the wake of Elizabeth II’s death.

The Queen had forged a special connection with the marmalade-loving mammal following their ‘meeting’ during this summer.

Camilla today described it as ‘a pleasure’ to re-home a number of the toys with vulnerable children at Bow Nursery.

As Paddington Bears were handed out, two-year-old Noa Nkemdirim hovered nearby until Camilla gave her a hug.

The royal also spoke with a circle of older children who were playing with blue foam, asking them: ‘What are we doing here?

The Queen Consort, with her equerry Captain Edwards Andersen, handed out the toys (Picture: PA)

Two-year-old Noa Nkemdirim reached out for a hug with Camilla (Picture: PA)

Camilla had been joined by Paddington film cast members Hugh Bonneville and Madeleine Harris, and Karen Jankel, the daughter of author Michael Bond, for whom he wrote the stories.

To mark the end of her visit, the Queen Consort shared marmalade sandwiches with the group, while around 40 children sat cross-legged at their feet.

Three-year-old Oscar Isherwood proclaimed ‘I don’t like marmalade’ while others clamoured to receive a bear from the Queen Consort.

Marmalade sandwiches were, of course, the centrepiece of the picnic (Picture: PA)

Camilla gently told the children to place the tiny boots on their Paddington Bears, ‘otherwise he won’t be able to go outside’.

Bonneville, who plays Mr Brown on the movie, read Bond’s story Paddington Takes A Bath to the children, echoing the way their bears all needed a clean before arriving at the nursery.

As she stood to leave, Camilla told the children and their carers: ‘It has been a pleasure to find a home for these bears – please look after them carefully.’

Carer Leighann Ives and three-year-old Serena Wicks presented her with a bouquet and a thank-you note.

All the toys had been cleaned before they were donated to the nursery (Picture: PA)

The Paddington toys had been left in tribute to Queen Elizabeth II (Picture: PA)

Camilla had travelled to the nursery in a car filled with some of the Paddingtons, on a journey from Clarence House in Westminster, along the Mall and past London landmarks including Trafalgar Square and Tower Bridge.

The visit came after she was pictured surrounded by teddies in a photo taken on October 13 to mark the 64th anniversary of the publication of the first Paddington Bear book.

Stephen McCartan caused at least £6,000 worth of damage during the incident (Picture: BPNS) An army veteran has been sentenced for stealing a double decker bus and driving it three miles home at 2am after a drinking session. Stephen McCartan, 52, staggered into Poole bus station in Dorset, opened the doors of the bus and […]