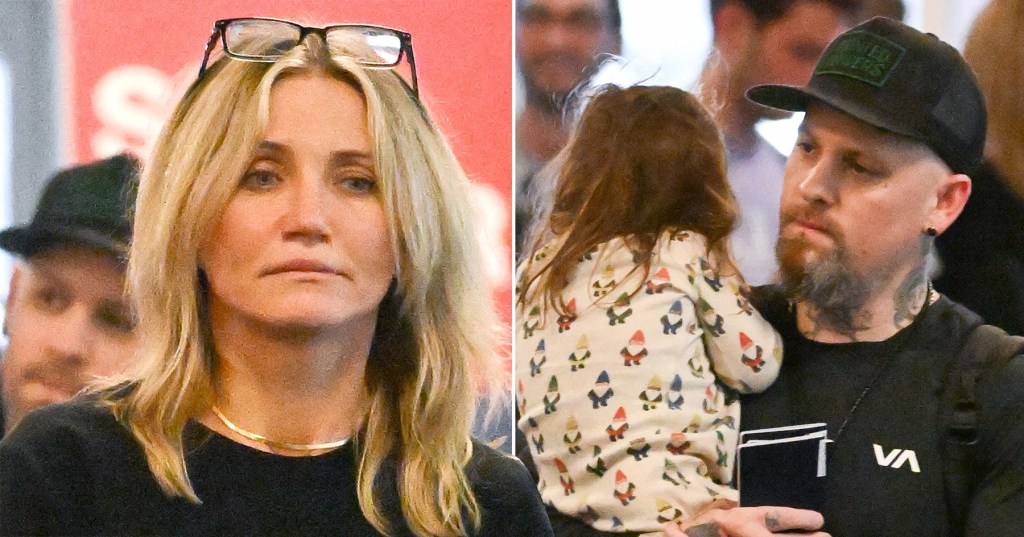 Cameron Diaz and Benji Madden were seen carrying their daughter Raddix as they headed through JFK airport in New York (Picture: TheImageDirect.com

Cameron Diaz and her rocker husband Benji Madden were spotted out with their daughter in a US airport.

The actress, 49, and Good Charlotte star, 43, were seen making their way through JFK airport this week as the family embarked on a trip.

Weaving their way through the crowds in the terminal, Cameron walked ahead pushing along a suitcase and bag, with snacks for the journey.

Guitarist Benji was seen following along holding the couple’s two-year-old daughter, Raddix, who they welcomed in 2019.

Cameron and Benji, who were married in 2015, wore matching black outfits as they strolled through the airport, the Charlie’s Angels star in a comfortable long-sleeve shirt and baggy pants with her blonde hair hanging loose.

Benji, meanwhile, wore a black jumper and jeans, along with a black cap.

Cameron store through the terminal with some of the family’s bags, dressed comfortably in an all-black outfit (Picture: TheImageDirect.com)

Little Raddix, who will turn three in December, wore bright pink Crocs and a sweet beige outfit with colourful patterns as she was carried by her rocker dad.

The celebrity couple tend to keep their family life to themselves, and sightings of the family out-and-about together are rare.

Cameron and Benji were first introduced in 2014 by mutual friend Nicole Richie, who is married to Benji’s twin Joel Madden, and were wed less than a year later.

Rocker Benji gently cradled his toddler daughter as he walked through the airport (Picture: TheImageDirect.com)

The pair have been head-over-heels for each other since, welcoming baby Raddix via surrogate at the end of 2019.

Private as they are, the husband and wife kept Raddix’s arrival quiet even after her birth, before dropping a joint statement in January 2020 revealing they were ‘blessed and grateful to begin this new decade by announcing the birth of our daughter, Raddix.’

‘She has instantly captured our hearts and completed our family.’

While the couple are intensely private, Cameron recently opened up on motherhood and life with Benji on Michelle Visage’s Rule Breakers podcast on BBC Sounds, heaping praise on her husband’s fathering skills.

‘He’s really taught me to value myself a lot more,’ she admitted, adding: ‘I think that I was receiving so much validation elsewhere and in all these other ways.

Tourist killed biker while overtaking thinking she was on dual carriageway

‘With our marriage, I learned how to really go all in.’

Becoming emotional, she said: ‘‘He’s just a guy I can count on. He’s hilarious and he’s so funny. And he’s the best dad ever. I could cry, he’s just the best.’

If you’ve got a celebrity story, video or …read more

Call Of Duty: Warzone season 4 – when it goes live and what to expect

Both games are getting new maps amongst other things (pic: Activision) The next season of content for Call Of Duty: Warzone and Vanguard will drop soon, so here’s everything you need to know about it. The upcoming Call Of Duty: Modern Warfare 2 and second Warzone game may be at the forefront of most fans’ […]

Alice Evans has spoken about her relationship with Ioan Gruffudd on social media (Pictures: Getty) Alice Evans has claimed that her estranged husband, Ioan Gruffudd, wants her to ‘go to jail’ for not attending her latest court hearing. The former couple have been in a bitter battle since their split last year, with the Liar […]

It’s so glassy (Picture: Daniel Lynch) Having lived overseas for nearly 20 years, Mike and Caroline Rich, along with their adult children, returned to the UK in September 2019 with the intention of renting a property for a couple of years while they searched for the perfect home in west London. Little did they know […]