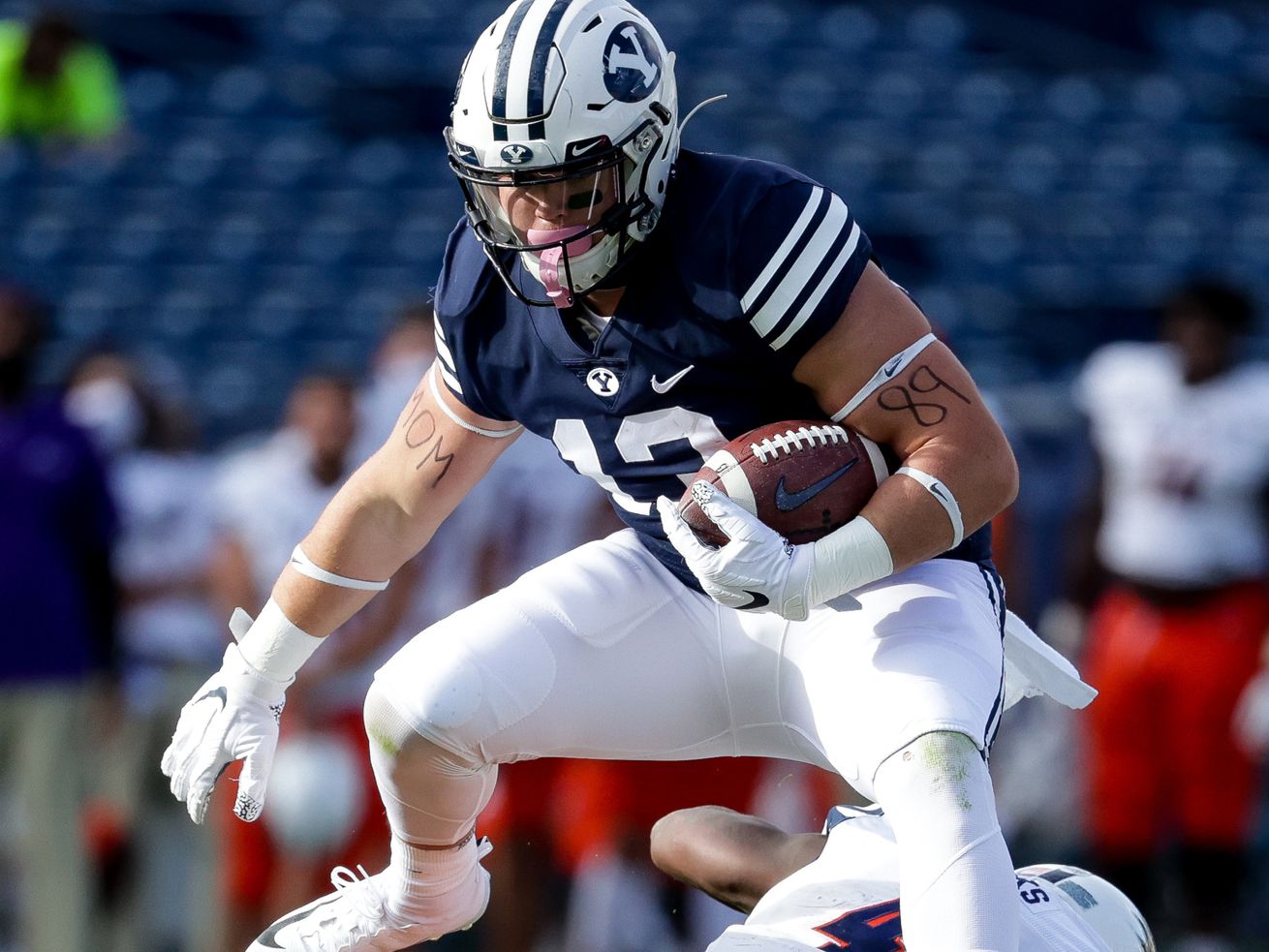 BYU Cougars tight end Masen Wake (13) leaps over UTSA Roadrunners safety Antonio Parks (4), but the play is called back due to an offensive holding call, during the game at LaVell Edwards Stadium in Provo on Saturday, Oct. 10, 2020. | Spenser Heaps, Deseret News

BYU sophomore Masen Wake entered the 2020 season as largely an unknown, as he tallied just three carries for six yards as a freshman.

This year, though, he’s getting all sorts of attention, and not just in the Beehive State, but nationally, too.

That’s because the 6-foot-1, 250-pounder has made a habit out of hurdling and trucking defenders in an effort to get extra yardage for himself or for a teammate as a blocker. It started in the second quarter of the season opener against Navy as he hurdled safety Evan Fochtman, and now it’s almost become surprising when he doesn’t try to leap over his defender when he gets the ball.

Nice play action arrow route for Wake. Makes one miss and then gets yac pic.twitter.com/hUp8VsQoiF

Wake’s hurdles have shades of former Cougar greats such as Taysom Hill and Chad Lewis, and Lewis has been among those who have taken note of the Lone Peak High School grad.

Masen Wake getting better with every hurdle!! Hit it bro!! pic.twitter.com/ZcBs8dCciY

Perhaps less noticed than the hurdles are the times when Wake has trucked defenders as a blocker, but he’s done that plenty, too.

BYU TE Masen Wake lines up at fullback and sets the tempo! This is who BYU wants to be. #BYUvsNAVY pic.twitter.com/yLk0eVjECK

Last week on a podcast with Justin Ayers, Wake was asked about the hurdle Lewis noticed, a play which also saw Wake truck and bounce off multiple defenders for a big gain against Louisiana Tech on Oct. 2.

“Yeah, so just growing up, I’ve always been kind of a big kid, so all of the little (defensive backs) once I get to that second and third level, they usually just shoot down at my legs because they don’t want to hit me high because I guess I’d run them over,” Wake said.

“They got smart with that so I had to counter and I just jump over them, and usually they go pretty low so I don’t have to jump very high so I can keep running, but that’s just always been a part of my game, just trying to be untackleable and just make plays.”

I was joined by @BYUfootball fullback @masenwake22 to talk about his hurdle that went viral. This man has hops! It was an excellent conversation and I hope you’ll check it out!

Summary List Placement The industry, which was hit hard early on in the pandemic, saw its sales growth increase 5.4% year over year (YoY) in September on a seasonally adjusted basis, per estimates from the US Census Bureau. This marks the retail industry’s fourth consecutive month of positive seasonally adjusted sales growth after posting negative growth in March, April, […]

Newbie startup founders were left out of this summer’s boom in venture investing. So were newbie venture capitalists, research finds.

Summary List Placement For many big-name venture capitalists and startup unicorns, business was great during the pandemic summer, with a record number of VC mega-deals and a red-hot IPO market delivering lucrative returns for investors.  But that generally hasn’t been the case for those trying to create their first venture funds, nor for founders seeking […]

Summary List Placement By default, your Apple Watch syncs one episode of each podcast you are subscribed to, but if you have manually downloaded podcasts to your watch, they can take up a lot of precious storage space. You can clear out that space by deleting podcasts using the Watch app on your iPhone.  How […]