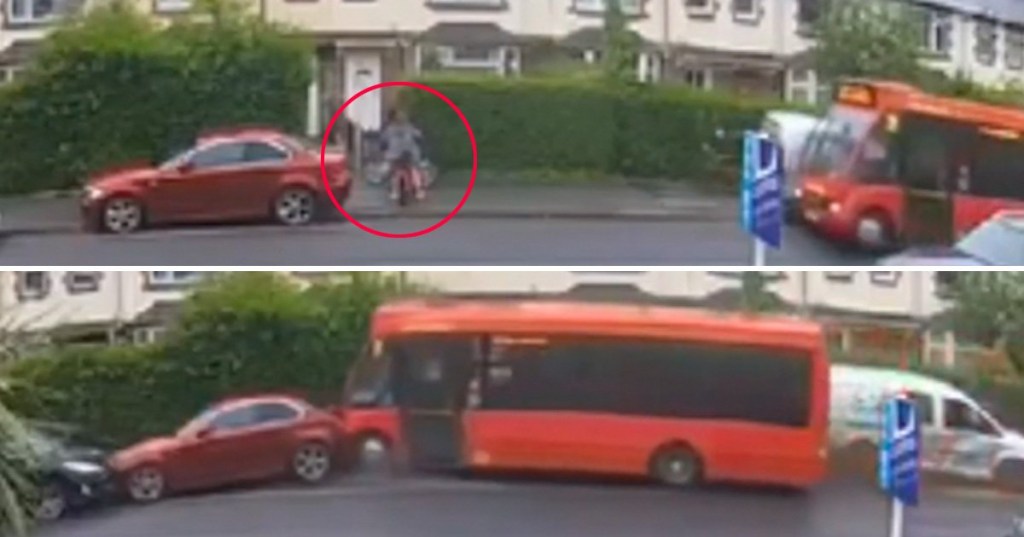 This is the horrifying moment a bus almost crashes into a group of three children before it ploughs into a line of parked cars.

CCTV shows how the bus first hit the side of a white van before smashing into the back of a red saloon car in Crewe, Cheshire just before 4.50pm last Saturday.

The saloon is then pushed into another car parked in front, which is propelled straight into a lamppost as both vehicles spin into the middle of the road.

After all the chaos, the bus finally comes to a stop right on the pavement.

Cheshire Police confirmed none of the group of children were injured during the incident.

A spokesperson for Cheshire Police said: ‘At 4.53pm on Saturday June 18, police were called to reports of a collision on Alton Street, Crewe.

‘Officers attended and found a bus had [hit] four parked cars before coming to a stop on the pavement.’

It then careered into the back of the red saloon (Picture: Cheshire Live / MEN Media)

The bus caused damage to some parked cars but no one was injured (Picture: Cheshire Live / MEN Media)

The daughter of a resident on the street said the incident ‘was just outside’ her mother’s house.

She described it as ‘proper unfortunate’, but said ‘no-one was hurt’.

Keith Myatt, head of business development for the Status Bus Group, which includes D&G Bus Limited, said: ‘The incident is currently being investigated, so until we have established the facts we have no further comment.’

D&G confirmed the incident is under investigation.

Emotional Shirley Ballas fights back tears as she reflects on brother’s suicide nearly 20 years on: ‘It’s hard to let go’

(L-R) Mollie King, Vanessa White, Una Healey, Rochelle Humes and Frankie Bridge of The Saturdays (Picture: Jon Furniss/WireImage) The Saturdays star Mollie King has shared that she’s pregnant with her first child and her co-stars could not be happier for her. Alexa, play The Saturdays’ Greatest Hits Megamix – we’re celebrating. The girl group, who […]