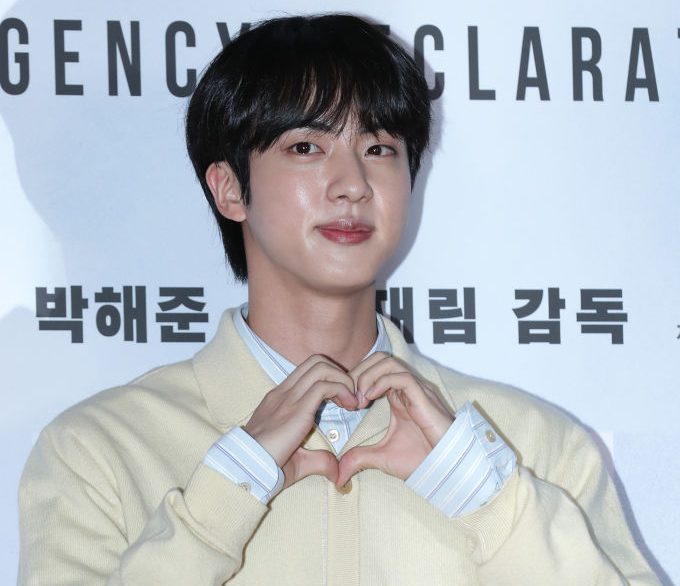 Jin urged fans not to come to the military base after details of his deployment were released (Picture: WireImage)

BTS band member Jin confirmed he would be enlisting in South Korea’s mandatory military service and pleaded with fans not to visit the army base where he will be stationed.

The first out of the seven stars to sign up, Jin will start training on December 13 in Yeoncheon County of Gyeonggi Province.

Following the confirmation of his enlistment details by several South Korean media outlets, the singer wrote to fans on Korean mobile app Weverse to urge them not to crowd the military camp when he arrives.

His note read: ‘While an article I didn’t want [regarding my enlistment] has been published, ARMY, you can’t come to the recruit training center.

‘As there’ll be many people other than myself, it will be crowded and can become dangerous ARMY, I love you.’

Citing unnamed military authorities, the announcement of his enrolment in basic training was confirmed by local press Aju Business Daily and also included details that he is set to receive an official assignment on completion of the initial programme.

ð¹ While an article I didnât want [regarding my enlistment] has been published, ARMY, you canât come to the recruit training centre ã ã
As thereâll be many people other than myself, it will be crowded, and can become dangerous
ARMY, al-la-byu [I love you] pic.twitter.com/HScj54SYcJ

Celebrating his 30th birthday on December 4, the paper reported the star will be deployed to a unit after five weeks of boot camp regimented training.

Jin’s request to fans came after the band’s management Big Hit Music confirmed all BTS members would serve their military duties as stated in the country’s laws.

Having previously submitted a request to delay his conscription, the hitmaker has reportedly withdrawn the plea and will follow the required enrolment procedure at the beginning of next month.

According to the management company’s notice to financial regulators, Jung Kook, Jimin, V, Suga, RM and J-Hope will follow suit and serve over the next few years.

Causing disruptions for the city’s campaign to host the 2030 World Expo, the members’ conscription was contested by Busan’s mayor, who pleaded with South Korea’s president Yoon Suk Yeol to exclude the popstars from the law.

The question was answered during a National Assembly conference in September when the South Korean defence minister Suh Wook said that it would be too ‘difficult’ to extend this alternative programme to BTS due to ‘aspects of fairness on fulfilling mandatory military service’.

Caption: George and Tammy – Unit Photographer: Dana Hawley Provider: Dana Hawley Source: MTVE Copyright: All Rights Reserved to MTVE (Credits: Dana Hawley) In great swathes of the USA all you hear on the car radio is country music. And in those great swathes George Jones was, in his cotton pickin’ heyday, bigger than Madonna. […]

Connor Durman shaved his head in preparation of his hair transplant (Picture: ITV/Shutterstock) Love Island star Connor Durman was hardly recognisable in before and after photos posted online that documented his recent hair transplant process.  The 28-year-old revealed he invested in the procedure to hopefully ward off male pattern baldness in the future amid his […]