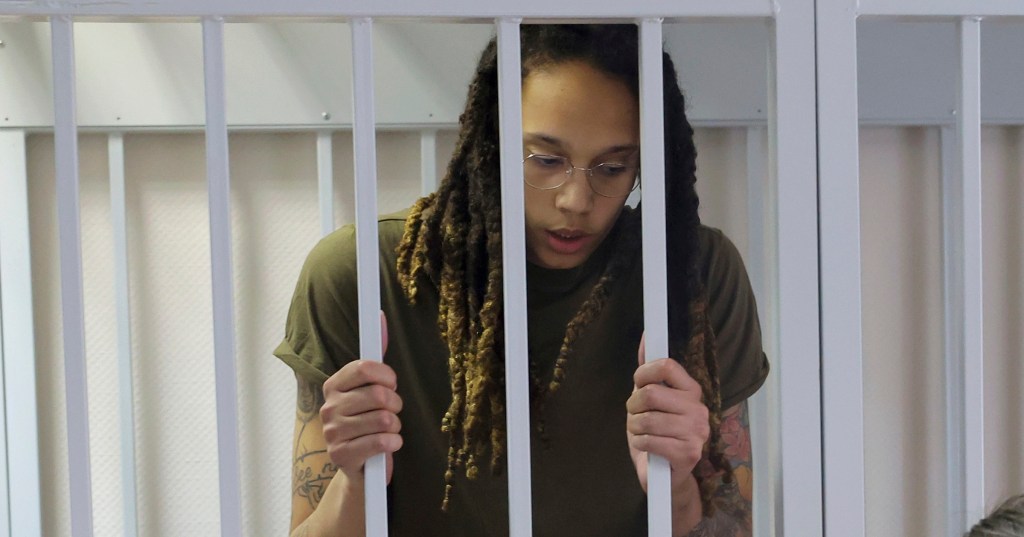 Justin Bieber has offered his help to Brittney Griner after she was sentenced to nine years in prison.

The WNBA star, 31, was found guilty of drug possession and smuggling by a Russian court, after she was found with vape cartridges containing cannabis oil in an airport in Moscow in February.

‘I want to apologize to my teammates, my club, my fans and the city of (Yekaterinburg) for my mistake that I made and the embarrassment that I brought on them,’ she said in court.

‘I want to also apologize to my parents, my siblings, the Phoenix Mercury organization back at home, the amazing women of the WNBA, and my amazing spouse back at home.’

On Thursday, Russian prosecutor Nikolai Vlasenko had asked for the athlete to be sentenced to nine and a half years behind bars, in addition to a 1million ruble fine ($16,700), with her jail term confirmed today.

Following the news, stars have shared their support for Griner on social media.

Justin Bieber offered his help over the news (Picture: Getty)

Joe Biden issued a statement over the sentencing (Picture: AFP)

Sharing an article on the sentencing, Bieber wrote on Instagram: ‘This hurts. If anyone knows of anyway I can help please let me know.’

The Russian judge ignored everything Britney Griner had stated. He sentenced her to 9 years in a âpenal colonyâ. For carrying 2 vaping cartridges – medically prescribed. Damn. Heartbreaking.

‘So for invading a neighbor country that would be about 90,000 years for Putin on the same scale.’

As Mia Farrow added: ‘The Russian judge ignored everything Britney Griner had stated.

‘He sentenced her to 9 years in a “penal colony”. For carrying 2 vaping cartridges – medically prescribed. Damn. Heartbreaking.’

US President Joe Biden called for Russia to release Griner ‘immediately’ in a statement.

‘Today, American citizen Brittney Griner received a prison sentence that is one more reminder of what the world already knew: Russia is wrongfully detaining Brittney,’ it read.

‘It’s unacceptable, and I call on Russia to release her immediately so she can be with her wife, loved ones, friends, and teammates.

‘My administration will continue to work tirelessly and pursue every possible avenue to bring Brittney and Paul Whelan home safely as soon as possible.’

A vape canister containing cannabis oil was found in Griner’s luggage at the beginning of the year, while she was traveling at Moscow airport after playing basketball for a club in Yekaterinburg.

To view this video please enable JavaScript, and consider upgrading to a web browser that supports HTML5 video Video of a white highway patrol officer wrestling a handcuffed black man to the ground and putting him in a chokehold that went viral online has prompted an investigation into the violent arrest. The video, taken on […]

Sir Salman was stabbed at least once in the neck and once in the abdomen (Pictures: Reuters/AP) Author Salman Rushdie may lose an eye and has suffered severed nerves and damage to his liver after he was stabbed on stage in New York, his agent has said. The 75-year-old remains on a ventilator after being […]

Liz Truss and Rishi Sunak with Sky News presenter Kay Burley ahead of tonight’s debate (Picture: PA) Rishi Sunak warned Liz Truss’s economic strategy will damage the nation, and that pouring ‘fuel on the fire’ will cause ‘misery for millions’. His Tory leadership rival insisted her tax cuts could avert the recession forecast by the […]