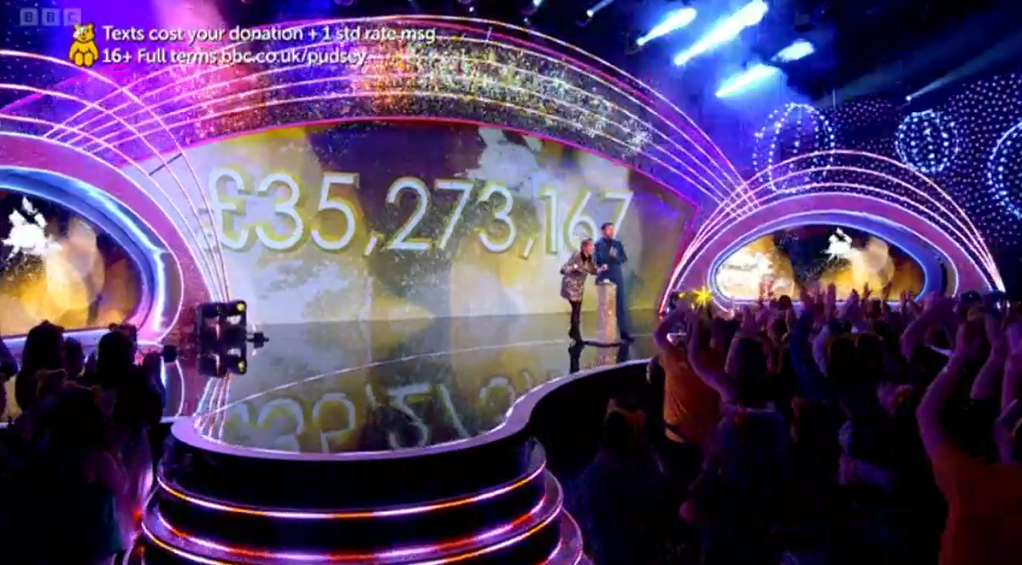 Children In Need donators raised an incredible amount of money for charity(Picture: BBC)

There was a whopping £35 million pounds raised for worthy causes over the course of this year’s Children In Need.

The annual campaign, which features skits, live music and star-studded appearances, was held on Friday night and did not disappoint.

With music from Lewis Capaldi, stories of incredible children bravely fighting through difficult times, and even the announcement of the new Doctor Who companion, Children in Need 2022 is one to remember.

This year’s campaign is raising funds to help tackle the effects of the cost of living crisis on children and young people, with all donations raised critical to help those in need.

However the hosts of the show repeatedly acknowledged that the British public as a whole are feeling the pressure from soaring energy bills and the cost of living, appealing for them to give as little or as much as they were able.

Despite the pressure on the entire country, the public managed to raise an incredible £35, 273,167 in honour of the event.

Thank you SO MUCH to everyone who has supported BBC Children in Need this year. Your generosity will help children all over the UK thrive and be the best that they can be ðhttps://t.co/4uY4ZHk1Po#ChildreninNeed

Midway through the show, Eurovision icon Sam Ryder revealed £15,424,340 had been raised so far, to rapturous applause from the audience.

He thanked the public for their ‘generosity’ despite the current financial situation.

One of the biggest moments from Children in Need 2022 saw the new Doctor Who companion revealed as Coronation Street actress Millie Gibson.

Millie, best-known for playing Keely in the ITV soap, will star opposite Sex Education star Ncuti Gatwa, who takes over as the Doctor in 2023.

The 18-year-old, who recently won the award for best young performer at the British Soap Awards, said she is ‘beyond honoured to be cast as the Doctor’s companion.’

‘It is a gift of a role, and a dream come true, and I will do everything to try and fill the boots the fellow companions have travelled in before me.

‘And what better way to do that than being by the fabulous Ncuti Gatwa’s side, I just can’t wait to get started.’

If you’ve got a celebrity story, video or pictures get in touch with the Metro.co.uk entertainment team by emailing us celebtips@metro.co.uk, calling 020 3615 …read more

Stevie suffered broken ribs and injuries to her face (Picture: BBC) Dr Stevie Nash (Elinor Lawless) was brutally attacked in tonight’s Casualty when she stood up to an aggressive associate of a patient who later ambushed her in an empty corridor and launched a ferocious assault on her. Stevie had been on her way to […]

Emmerdale spoilers: Mack is rocked to the core as he discovers Chloe is pregnant with his baby

Mack’s secrets could be about to unravel (Pictures: ITV) Following Kerry (Laura Norton)’s recent departure from Emmerdale, Chloe (Jessie Elland) is left feeling isolated as she deals with the fact that she’s pregnant and on her own. There is a supportive person around though – Charity (Emma Atkins). Who also happens to be the partner […]

To view this video please enable JavaScript, and consider upgrading to a web browser that supports HTML5 video This article contains affiliate links. We will earn a small commission on purchases made through one of these links but this never influences our experts’ opinions. Products are tested and reviewed independently of commercial initiatives. Lewis Capaldi […]