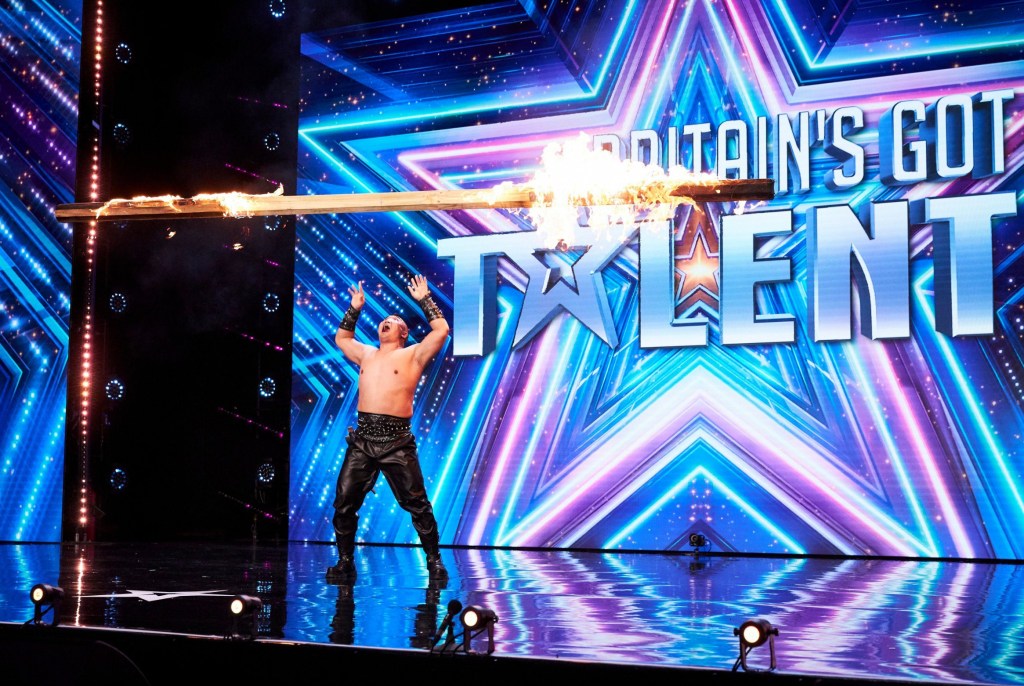 A ‘human action man’ left the Britain’s Got Talent judges completely stunned and amazed after his audition tonight, but it wasn’t his first (second, third or even fourth) time on a Got Talent stage, or his first performance in front of Simon Cowell.

Tulga, 37, performed tricks with a 40kg plank of wood and left those watching impressed by his dangerous audition as the performer balanced the giant plank of wood with both ends engulfed in flames and twirled it around using his shoulders.

He then went a step further and balanced it using his mouth before throwing it up in the air and catching it.

As if that wasn’t dangerous enough, Tulga, dangling from the ceiling, held the flaming plank of wood connected to a chain in between his teeth, much to the shock and surprise of the judges and viewers.

Giving him a standing ovation, Simon began the comments: ‘That’s how you do it Tulga, that’s just how you do it,’ while one viewer was heard saying: ‘He’s a madman.’

‘Tulga, I want you to be security guard,’ Simon said (Picture: Thames/Syco/REX/Shutterstock)

‘Just the way you stand, you hold yourself, I can tell you mean business, and you make it look easy, but my goodness, so much respect for what you do,’ she continued.

Simon added: ‘Tulga, I want you to be my security guard!

But this was actually his fifth Got Talent stage! (Picture: Thames/Syco/Shutterstock)

David Walliams shared: ‘I was completely blown away, but you had me when you came on in those leather trousers.

‘You are very likeable and have this extraordinary talent that no one else in the world has, it’s totally yours.’

However, this isn’t the first time Tulga’s shown off his ‘action man’ talents on a Got Talent stage, and it’s not even Simon’s first time watching him perform.

While some of his auditions were similar to tonight’s performance, in others he actually used some of the judges as props, carrying them on the plank like a swing.

For the American version, Tulga was eliminated before the quarterfinals, whereas for France and Australia’s shows, he didn’t make it past the Judge Cuts stage.

Payton Gendron, 18, streamed his rampage on Twitch, authorities said (Picture: Erie country DA) An 86-year-old African American grandmother gunned down while doing her weekend shopping is one of 10 victims of a supermarket mass shooting. Investigators say the massacre carried out by a white teenager in Buffalo, New York State, was motivated by racial […]

Merson has picked a winner for the clash (Picture: Sky Sports) Paul Merson has made his prediction for this weekend’s FA Cup final as Chelsea go head-to-head with Liverpool at Wembley. The two teams met in the Carabao Cup showpiece earlier this year, with Jurgen Klopp’s side winning a penalty shootout to lift the trophy. […]

Alexander’s face pretty much sums up our reaction in one look (Picture: SKY) The Gangs of London season two trailer has come crashing in and already we are squirming as the deaths look bloodier, gorier and more gruesome than its predecessor. Gangs of London’s first season boasted one of the highest body counts in television […]