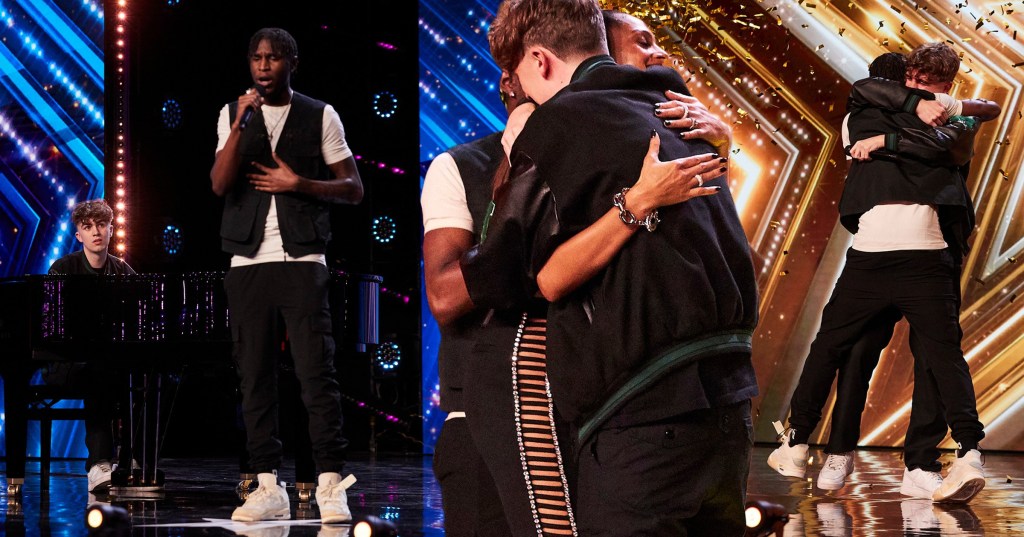 The last golden buzzer of the series! (Pictures: Rex)

Rapper Flintz performed an emotional piece while he was accompanied by Taylor on the piano, and although they were praised with a standing ovation and Simon Cowell labelling them ‘perfect’, this was actually their first time performing together.

The duo, who had met online during lockdown, had only met in real life on the day of their audition.

‘Today was the first day we met,’ Taylor, 17, shared, leaving the judges stunned.

Speaking about the emotional story behind the performance, Flintz explained: ‘I was a troublesome kid, hanging out with the wrong set of people, going down the wrong path,’ before saying that his parents ‘dragged him out’ of that and helped him become ‘the person [he is] today.’

Flintz added that his dad was his ‘inspiration’, and that his song was about inspiring his younger brothers, to ensure they didn’t follow the same footsteps he did.

The pair had never met before in real life! (Picture: Thames/Syco/REX/Shutterstock)

Despite never having any rehearsals together in real life, the pair were awarded a standing ovation from all four judges, and shared an emotional moment after Alesha boosted them straight through to the live semi-final shows.

‘Everything was so clear and so passionate. I loved hearing your story,’ judge Amanda Holden said to Flintz, before adding to Taylor: ‘You are phenomenal on that piano. I mean, amazing.’

‘It was like a scene from a great movie’ (Picture: Thames/Syco/REX/Shutterstock)

David Walliams added: ‘There will be a lot of people watching this who will relate to that, and they’ll take a positive message away from it which I think is fantastic.’

Simon said: ‘It was real, that was what was great about it. It was real, and I loved that.

‘It was like a scene from a great movie. This shouldn’t have worked bearing in mind how you’d never met before today. Everything was just brilliant.

‘Even when your voice broke with emotion at the end, it was just an absolutely perfect audition.

‘Genuinely, it’s everything we look for.’

Rounding up the judges’ comments, Alesha shared: ‘Nothing makes me more happy than seeing young musicians, you had something to say, we’ve had no one on the show like you before which is brilliant.

‘And they say in life, save the best till last,’ she added before slamming the golden buzzer.

‘Very well deserved, can’t wait to see what you’re going to do in the live shows now,’ she told them.

My sister-in-law nearly destroyed my marriage – I told my husband he had to cut her out People who lost their virginity later in life share why they are glad they waited Tips for doing DIY home projects alone Office housework: Why women are shouldering the burden of non-promotable tasks I would love to live […]

Michael Fabricant has been accused of making light about the allegations against a Conservative politician (Picture: MI News/NurPhoto) A Tory MP has been accused of ‘making light’ of rape allegations against a colleague. Michael Fabricant has come in for strong criticism after making a flippant remark about the development online. He wrote on Twitter that […]

Police were called to Aadams Apartments in Leicester (Picture: Google Maps/Twitter) A woman has been arrested after a two-year-old boy reportedly fell out of a second-storey window. The toddler was not believed to have suffered life-threatening or life-changing injuries in the incident in Leicester yesterday. Police were contacted at 4.49pm by East Midlands Ambulance Service, […]