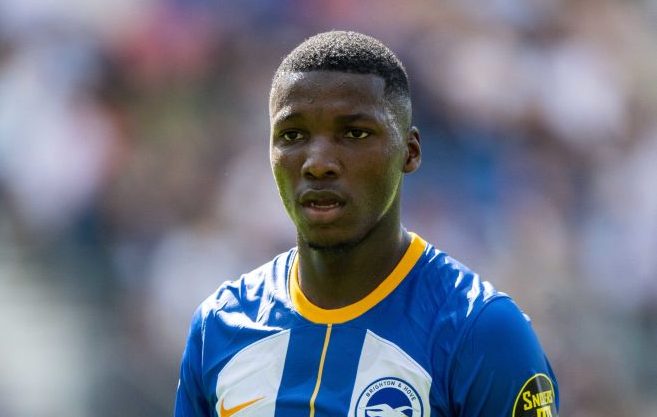 Brighton are demanding £100 million from Chelsea for Moises Caicedo, according to reports.

Chelsea are looking to bolster Graham Potter’s options even further before the end of the January transfer window but have yet to recruit a new central midfielder.

Talks with Benfica over a deal for Enzo Fernandez restarted this week but the Portuguese club are adamant that Argentina’s World Cup winner will not leave unless his €120m (£105.6m) release clause is met.

According to The Times, Chelsea have been in talks with Brighton for Caicedo this month but a bid of around £50m was rejected last week.

Brighton are understood to be holding out for a fee in the region of £100m for the Ecuador international, and the report claims that Potter has been the one driving Chelsea’s interest.

When asked about his future at Brighton, Caicedo said earlier this week: ‘I am focused on Brighton.

‘I am here, I’m playing every day. Things from outside don’t trouble me, nor does it take that focus away because I’m focused only on here. I handle it well.

‘You hear rumours here and there, but I only try to be focused on the club where I am now, the club which opened the doors for me to be playing every week.’

Chelsea are also in talks with Lyon to sign their right-back Malo Gusto.

The 19-year-old, who is also on Manchester United’s radar has already agreed personal terms with Chelsea but the club have yet to agree a fee with Lyon as their £25m offer was rejected this week.

Louise Harrison was instrumental in helping The Beatles break America in the 60s (Picture: Getty Images) Sister to The Beatles star George Harrison, Louise Harrison has died aged 91 after helping the legendary pop group crack America.  Announced on her Facebook group, her death was confirmed as friends and family posted heartbreaking tributes to the […]

Sam Smith proud to finally have the ‘opposite’ of body dysmorphia: ‘I look fabulous’

Sam Smith is feeling more confident (Picture: Toni Anne Barson/FilmMagic) Sam Smith is loving life and feeling comfortable in their own skin after growing up avoiding putting their figure on display. The 30-year-old singer has grown to embrace their body and move on from society’s focus on toned stars like Justin Bieber, reflecting on their […]