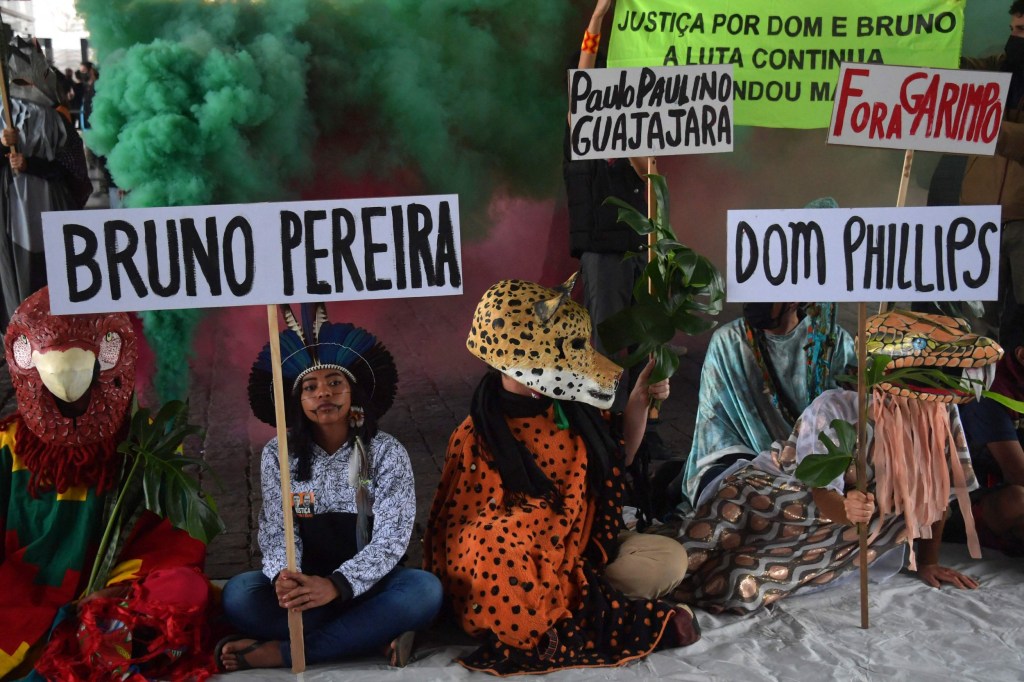 Three men have already been arrested on suspicion of murdering the pair in the Amazon Rainforest.

The case has sparked international outrage, with tributes pouring in for the duo and their work on environmental and indigenous issues.

Brazilian federal police alleged on Sunday that five more suspects helped hide the bodies of Mr Phillips, who worked for The Guardian among others, and his friend Mr Pereira.

The police did not name the new suspects, adding in a short statement that ongoing investigations aim to ‘clarify all the circumstances, motives and those involved in the case’.

Police officers escort Oseney da Costa de Oliveira, who is accused of being involved in the case (Picture: Reuters)

A child holds a flower in front of a picture of journalist Dom Phillips and indigenous expert Bruno Pereira (Picture: Reuters)

A search party eventually found the bodies after being told where they were located.

Freelance reporter Mr Phillips, 57, was researching a book with the help of Mr Pereira, 41, who was a former head of isolated and recently contacted tribes with the federal indigenous affairs agency Funai.

The pair were initially reported missing on June 5 after traveling together by boat through the Javari Valley, a remote region bordering Peru and Colombia.

Police say both were shot with hunting ammunition and found in a remote part of the Rainforest.

Police officers carry body bags after being led to the location of the bodies (Picture: Reuters)

Mr Phillips’ family have said they are ‘heartbroken’ at the incident.

In a statement following the discovery of the bodies, his wife Alessandra Sampaio added: ‘Now we can bring them home and say goodbye with love.

‘Today, we also begin our quest for justice. I hope that the investigations exhaust all possibilities and bring definitive answers on all relevant details as soon as possible.’

Tensions have been mounting in Brazil about far-right President Jair Bolsonaro’s approach to the climate crisis and over rising violence, particularly on native land.

Travellers have faced months of disruption (Bloomberg via Getty) Holidaymakers have been hit with months of travel chaos, with a wave of cancelled flights leaving many families thousands of pounds out of pocket. Demand has surged back to pre-Covid levels but airlines have suffered staff shortages after letting huge numbers go during the pandemic. As […]

Bethesda’s biggest game yet? (pic: Microsoft) Todd Howard has shared some details regarding Starfield’s length and how he thinks the game will be perfect for the modding community. There’s no question that Starfield will be a huge game, in both senses of the word. During its gameplay reveal at the Xbox showcase, Bethesda promised well […]

There’s a problem at the Platts (Picture: ITV) There’s a problem occurring at the Platts’ household in Coronation Street as Shona (Julia Goulding) starts to believe Gail’s (Helen Worth) new ornament might actually be cursed. With Shona wanting to relax, David (Jack P Shepherd) returns home to find incense burning and Shona flat on her […]