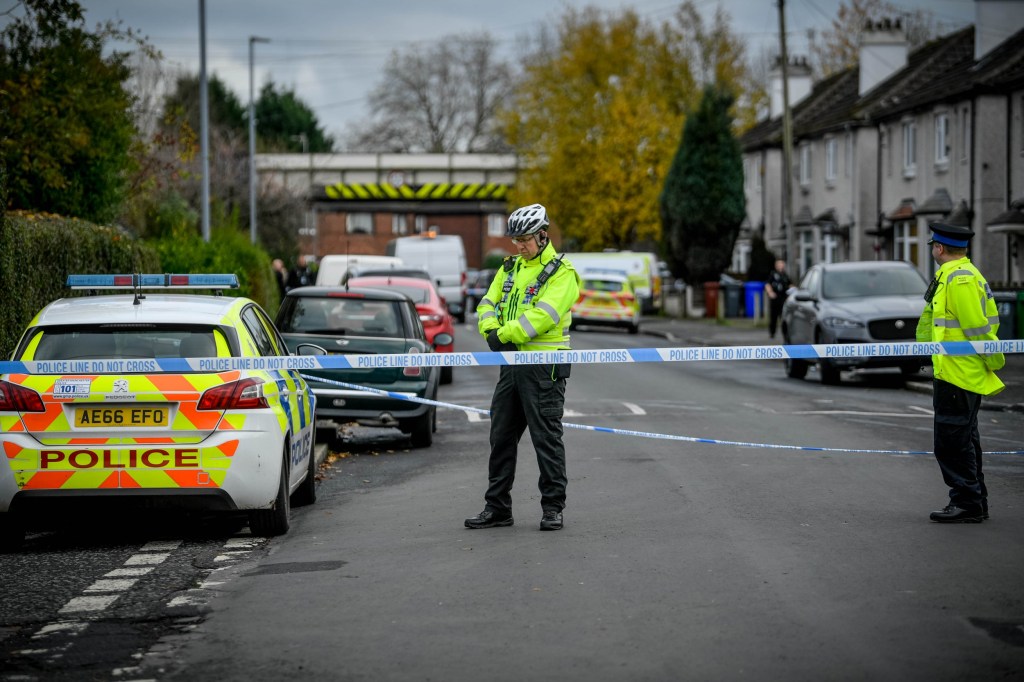 The scene on Southlea Road in Withington, Manchester, this evening (Picture: MEN MEDIA)

A murder probe has been launched after a teenager was stabbed to death in Manchester.

The boy, 17, was killed in a targeted attack and there is no threat to the wider public, detectives say.

Emergency services rushed to the scene, on Southlea Road in Withington, at 11.30am this morning.

The teenager was taken to hospital but died a short time later.

Stop-and-search powers have now been introduced in the area near where the incident took place, including parts of the Withington and Burnage.

Greater Manchester Police (GMP) said the Section 60 has been put in place from Tuesday until 5pm on Wednesday.

The powers mean officers can stop and search anyone in the area during that time.

Police said they do not believe the attack was random and their inquiries suggest there is no threat to the wider public.

Superintendent Helen Critchley said: ‘We understand the use of a Section 60 can cause concern to residents, however, we use these powers only when proportionate and necessary which I believe is the case today.

‘Please be reassured that we are doing all we can to keep you safe. We have deployed extra uniformed and non-uniformed officers to the area to support the investigation team and the community, and I want members of the public to know that they can approach officers and talk to them if they have any questions or concerns.

‘The force is working with partner agencies to fight, prevent and reduce knife crime so I would like to take this opportunity to encourage anyone who knows or suspects someone is carrying a weapon to report it before it’s too late.’

Anyone with information has been urged to get in touch with police.

Jonah Hill has reportedly filed documents to change his name (Picture: Getty) Jonah Hill has filed a petition to change his surname, it has been claimed. The 38-year-old, who has been a staple of the big screen for decades, is known professionally as Jonah Hill – but his last name is actually Feldstein. He chose […]

Luis Suarez believes Ghana should not focus on revenge in their crucial World Cup group game (Reuters) Luis Suarez has refused to apologise for his infamous handball against Ghana at the 2010 World Cup and blamed Asamoah Gyan for missing the penalty. Suarez denied Ghana a crucial goal as he stopped Dominic Adiyiah’s header with […]