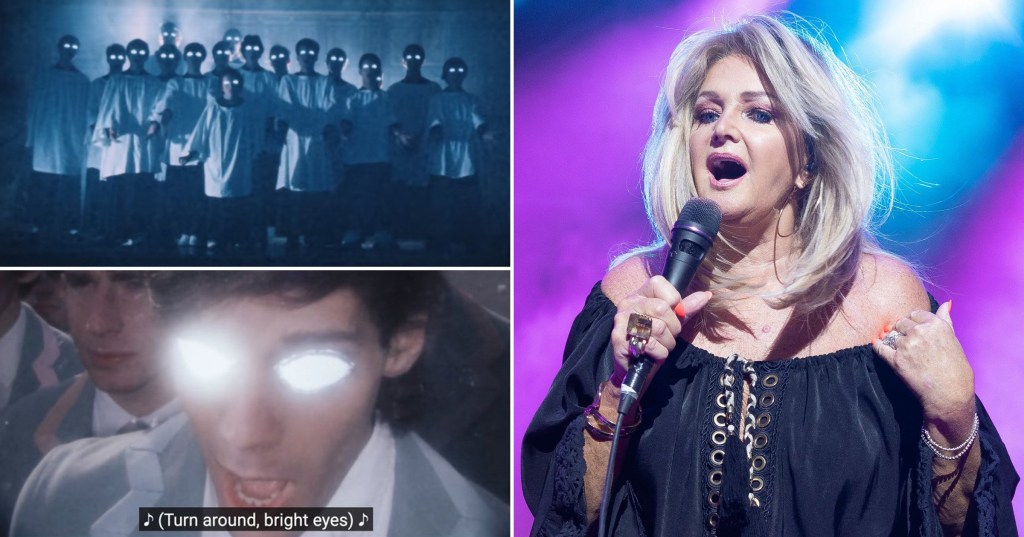 Bonnie Tyler, like the rest of us, has no idea what’s going on in the famous Total Eclipse Of The Heart music video (Picture: Rex / @BonnieTOfficial / YouTube )

It’s almost 40 years since one of the most iconic music videos of all time was released, and even star Bonnie Tyler doesn’t know what to make of it.

When you think of Total Eclipse of the Heart, the first thing you probably think is: ‘EVERY NOW AND THEN I FALL APAAAAAAART!’

The second thing you probably think of is the absolutely bonkers music video – and in particular, those incredibly creepy schoolboys.

Let’s go back for a minute: in 1983, Bonnie Tyler released the music video for what is genuinely one of the best ballads of all time, and what better way to complement the powerful lyrics and her incredible voice than with a video featuring prancing school boys, weird symbolism and a potentially haunted boarding school?

Not to mention: slow-mo doves, dramatic poses, gymnasts, NINJAS? and boys with car headlights coming out of their eyes.

Oh it’s beautiful, it’s ridiculous, it’s inspired, and Bonnie doesn’t know what was going on at all.

Bonnie remains in the dark about what was going on in her music video (Picture: Getty Images)

Just what was all this about (Picture: Bonnie Tyler)

The Holding Out For A Hero singer delighted fans when she made reference to her most popular song with a post on Twitter this week, sharing an image from the famous video.

The image in question: one of her boarding school boys, his eyes shining with white light.

And Bonnie’s caption? ’39 years on and I still can’t explain this.’

39 years on and I still can’t explain this pic.twitter.com/y3RY9Z51bz

Bonnie’s tweet, simple as it is, proved dramatically effective, with thousands flocking to the comment to agree that they also can’t explain it, but by God was it good.

‘We need more of this kind of bracing honesty,’ one person wrote, while another said they were ‘relieved’ Bonnie was as in the dark as the rest of us.

Meanwhile, another fan asked Bonnie if she was familiar with the Literal Video version of Total Eclipse of the Heart, and good news – she has, and she ‘loves it.’

If you haven’t seen the Literal Video version, first of all, where have you been? and second of all, it does exactly what it says on the tin – describing every minute detail of the video, to the tune of the song itself.

Give it a watch. It’s a classic.

However, she says the Lego Version of the video is her favourite – which, again, you can imagine from the title what it entails.

It’s not the first time Bonnie has referenced the iconic song on her social media, and it’s usually a funny, tongue-in-cheek comment.

Shiver me timbers! Skull And Bones has been delayed yet again

Skull and Bones – arr, it be a cursed game! (pic: Ubisoft) Ubisoft’s absurdly delayed pirate adventure is no longer going to be out this year, but there is an open beta for anyone still interested. You can’t help but imagine that there’s some kind of sunk cost fallacy going on at Ubisoft when it […]

Matt and Whitney kiss in the next episode of MAFS UK (Picture: E4) Married At First Sight UK’s Matt and Whitney share a secret kiss in the trailer for Tuesday’s episode despite being coupled up with different people. After Metro.co.uk revealed that new relationships will arise in the ever-dramatic E4 series, the pair have been […]