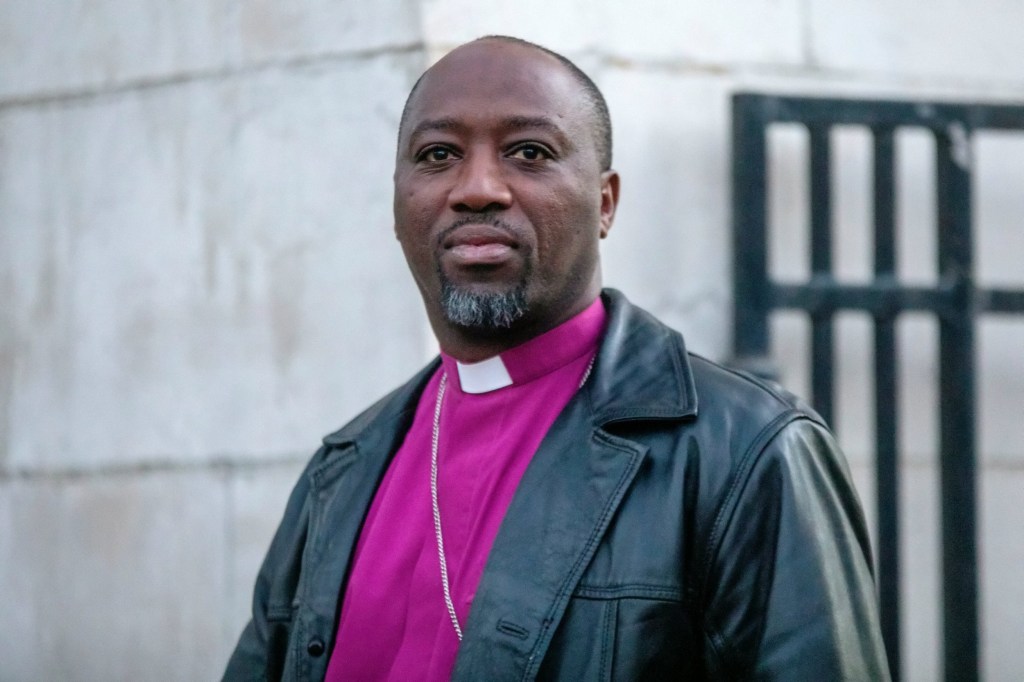 A bishop sold bogus £91 kits he claimed would cure coronavirus and told his congregation they might ‘drop dead’ if they didn’t buy them, a court heard.

Climate Wiseman, 47, who preaches at the Kingdom Church in Camberwell, south London, claimed the kits would also stop people catching the illness.

He has gone on trial accused of one count of fraud and two counts of engaging in unfair commercial practice over the pandemic, which he denies.

Wiseman claimed his mixture, made from cedarwood, hyssop oil and olive oil, had cured at least 10 people and said investigators probing him were ‘the antichrist’.

Jurors were told the faithful could purchase the ‘cure’ by signing a ‘Prayer Agreement Form’ on several websites he promoted.

In a blog, Wiseman said the mixture had sat upon the altar for seven days alongside a scarlet yarn and would ‘act like an invisible barrier’ against coronavirus and ‘any other deadly thing’, prosecutors said.

He claimed the virus ‘can’t stand the power of the oil’ and after inhalation the bug is coughed out of the body and ‘just dies’.

Inner London Crown Court heard the kits were considerably more expensive than other items he was selling, and his sales pitches were all motivated by money.

Testimonial videos claimed a woman with no sense of taste and a high temperature was left feeling ‘much better’ after drinking some of it.

Trading standards from Southwark Council were first made aware of the so-called cure being advertised on Wiseman’s website on March 24, 2020, the first day of lockdown.

A week later they asked him to remove any mention of its supposed curing powers.

Some were removed but he still claimed the kits offered ‘divine protection during the coronavirus plague’.

In April 2020, undercover reporters discovered people acting in Wiseman’s name at the Kingdom Church were claiming it could cure coronavirus.

He denied misleading anyone, but he still insisted his oil worked and he was obliged to heal the nation as ‘a prophet’.

Material about the oils were still found online when trading standards probed again in January 2021.

Wiseman, from Camberwell, appeared in the dock wearing bishop’s regalia and showed little emotion as the case against him was read out.

Richard Heller, for the prosecution, told jurors: ‘The promotion of the oil sold by the defendant, under whatever name he chose to give it, was little more than exploitative commercial opportunism disguised as an article of faith.

‘The claims made both by the defendant and in his name can’t possibly have been true. Whatever beliefs the defendant may hold, it doesn’t confer the right to sell bogus cures to fatal …read more

A dedicated team has been set up to find the suspect as soon as possible (Picture: Getty) A manhunt has been launched in connection with three possible kidnap attempts in Manchester. Police say a 15-year-old girl was approached by a stranger who tried to force her into a car in the latest in a string […]

To view this video please enable JavaScript, and consider upgrading to a web browser that supports HTML5 video Joe Lycett has pulled a blinder and revealed that the £10,000 he supposedly shredded was, in actual fact, fake. The comedian had delivered an ultimatum to David Beckham, urging the former England footballer to step down from […]