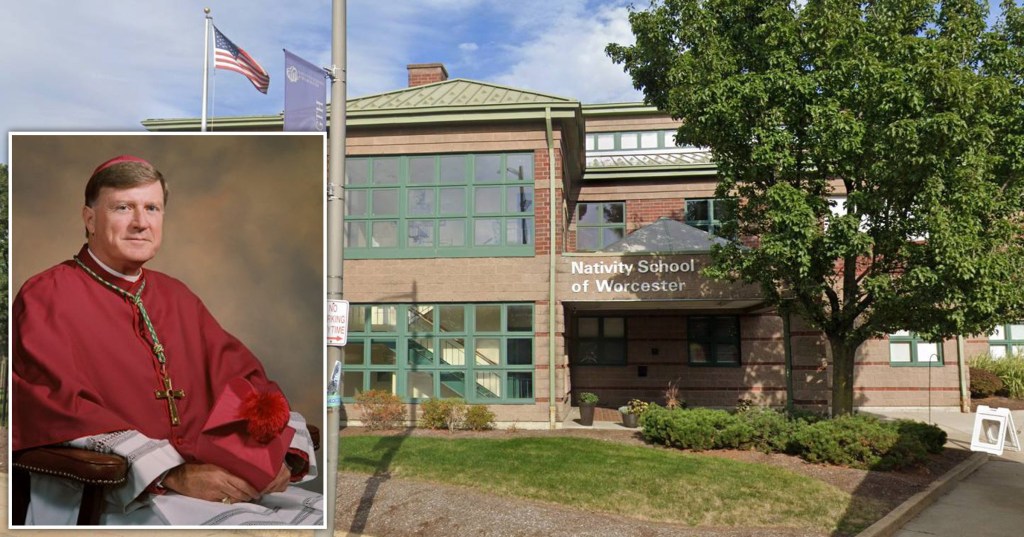 The school has had the flags up since January and says they will continue to fly them (Pictures: Google Maps / worcesterdiocese.org/Office of the Bishop)

A Massachusetts school has been told it can no longer call itself Catholic after flying Black Lives Matter (BLM) and Pride flags on its campus after being told to take them down.

Bishop Robert J McManus of the Diocese of Worcester said that the Nativity School of Worcester is ‘prohibited’ from branding itself as Catholic because the school supports movement ‘inconsistent with Catholic teaching.’

McManus noted that the LGBTQ flag contradicted the church’s teaching that marriage is between a man and a woman. Meanwhile, the church says it ‘stands unequivocally behind the phrase “black lives matter”‘ but does not support the BLM movement.

According to the bishop, the BLM movement, ‘co-opted the phrase and promotes a platform that directly contradicts Catholic social teaching on the importance and role of the nuclear family and seeks to disrupt the family structure in clear opposition to the teachings of the Catholic Church.’

‘The flying of these flags in front of a Catholic school sends a mixed, confusing and scandalous message to the public about the Church’s stance on these important moral and social issues,’ the bishop wrote.

Now the school, which is a tuition-free school for young boys ages 10 to 13 facing economic hardship, can’t identify as Catholic, celebrate mass, sacraments or sacramentals.

A bishop who serves on the school’s board of trustees must also be removed.

The school began flying the flags in January, answering the call of many students calling to make the campus more inclusive, CBS Boston reported.

When the church first told the school to take down the flags, the school’s president stood by the decision.

‘As a multicultural school, the flags represent the inclusion and respect of all people. These flags simply state that all are welcome at Nativity and this value of inclusion is rooted in Catholic teaching,’ president Thomas McKenney said.

The Nativity School is independently funded and does not receive money from the Diocese. McKenney says the school will appeal the decision but also continue to fly the flags.

McKenney also said the decision made by the Diocese will not change how the school operates.

This year marks 50 years of Pride, so it seems only fitting that Metro.co.uk goes above and beyond in our ongoing LGBTQ+ support, through a wealth of content that not only celebrates all things Pride, but also share stories, take time to reflect and raises awareness for the community this Pride Month.

And we’ve got some great names on board to help us, too. From a …read more

Can you keep up with all these Diddy romances? (Picture: REX/Getty) Sean ‘Diddy’ Combs recently confirmed that he is dating City Girls rapper Yung Miami. The 52-year-old star confirmed he is romancing musician when he appeared on the 28-year-old beauty’s new series Caresha Please and alluded to their shared past experiences, as well as discussed […]

Asylum seekers who avoided being deported to Rwanda are likely to be tagged first (Picture: AP/AFP) Some people who arrive in the UK in small boats or the back of lorries will be electronically tagged under a Home Office trial. The department said the 12-month pilot, which began on Wednesday, will test whether electronic monitoring […]

The girl was rushed to hospital from the HYB Eurocalas Hotel (Picture: Hyb Eurocalas) A seven-year-old girl is critically ill in hospital after nearly drowning in her hotel pool while on holiday with her family in Majorca. She was rushed to an intensive care unit after lifeguards spotted her motionless at the bottom of the […]