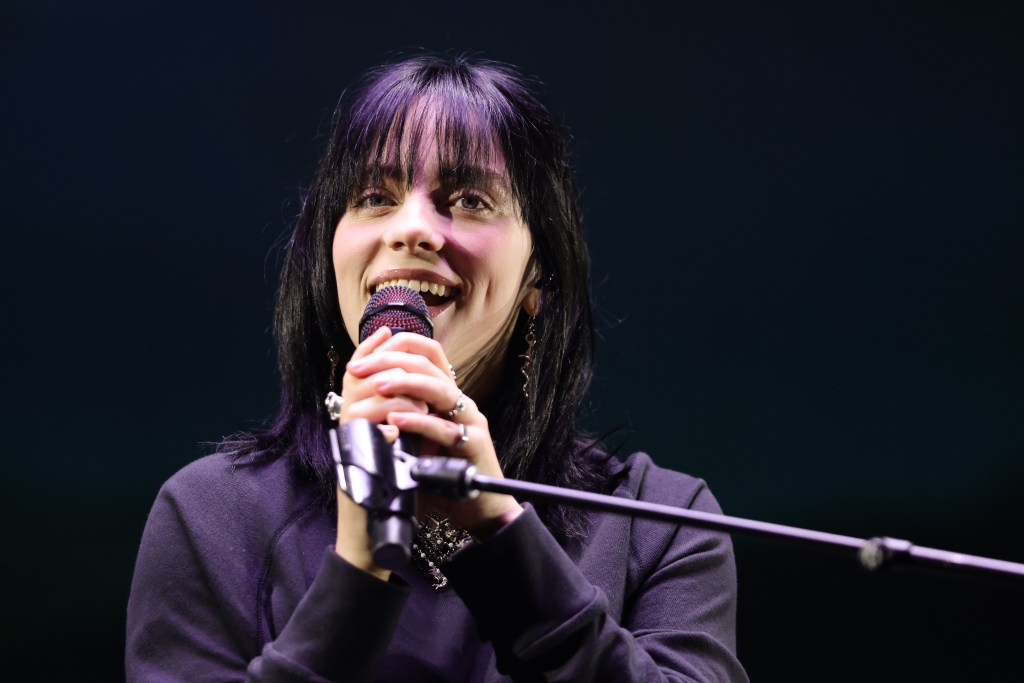 Billie is returning to Glastonbury on Friday as a headliner (Picture: Getty Images)

Billie Eilish has admitted she constantly feels like she is ‘undeserving of everything’ but this makes her more excited to become Glastonbury Festival’s youngest ever solo headliner.

The Grammy-winning singer, 20, will make history when she takes to the Pyramid Stage on Friday night as the festival returns after a three-year hiatus due to the pandemic.

The Bad Guy chart-topper noted that headlining as a woman also makes her ‘excited for the future’ as she feels there are fewer female artists given the top spot.

‘It’s a serious once-in-a-lifetime opportunity to be asked to go to and to do.

‘But first of all, it makes you doubt everybody because you’re like, “Why would you choose me?” But with that being said, that’s why I’m even more excited about it and stoked to be the youngest headliner ever,’ she told Matt Wilkinson on his Glastonbury special show on Apple Music 1.

The chart-topping singer has been busy on her Happier Than Ever world tour this year (Picture: Getty)

Acknowledging her ‘really cool’ spot as a female headliner, Billie noted that it didn’t tend to be the norm, adding that she felt ‘really honoured and really excited’.

The star-studded line-up of headliners also includes Sir Paul McCartney, who will perform on Saturday night, reportedly including a virtual duet with late Beatles band mate John Lennon, while rapper Kendrick Lamar will play on Sunday.

Billie made her Glastonbury debut in 2019 when she performed on the Other Stage and treated crowds to a string of tracks such as Bad Guy and You Should See Me In A Crown.

The singer revealed she is trying to remain composed in the run-up to her headline slot this weekend as she feels she will get overwhelmed if she overthinks the performance.

She explained: ‘Doing this kind of show and headlining and with all the pressure of it, it’s like, if you overthink it you might bomb. So I try to keep myself as composed as possible. But if I do think about it, it’s like the coolest that I’ve ever heard.’

The US pop star added that she knew the festival was ‘big’ but had ‘no hesitation’ on whether to take on the opportunity after confirming it worked within her schedule.

Her brother and co-writer Finneas O’Connell will perform alongside her, with the Oscar winner describing playing a …read more

She’s injected more oomph into Love Island than all the contestants who have made the same pilgrimage to the villa combined (Picture: ITV/REX/Shutterstock) There was a time when I would long for the summer – and not because of the drinks in the park, weekend barbecues or chance to flaunt my illuminous pasty chest to […]

The Queen was all smiles as she received a special ‘Canterbury Cross’ (Picture: Getty/PA) The Queen has been pictured standing without a walking stick as she was presented with a special Canterbury Cross for her ‘unstinting service’ to the Church of England. The 96-year-old head of state received the honour during a face-to-face audience with the […]