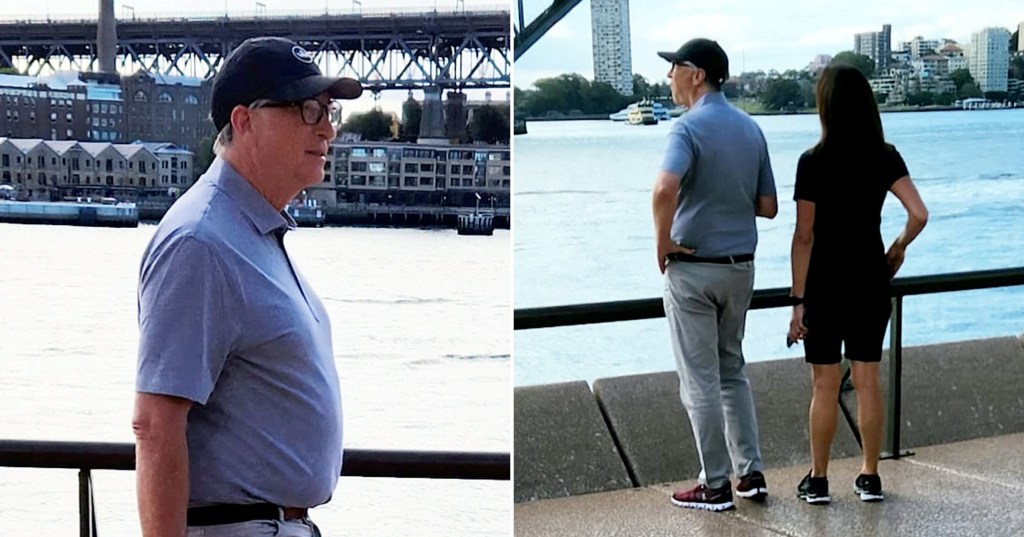 The billionaire was joined by a mystery brunette as the pair marvelled at the sights (Picture: SWNS)

Bill Gates was keeping a low profile as he enjoyed a day outside the Sydney Opera House.

The billionaire was joined by a mystery brunette as the pair strolled by the iconic landmark.

They visited the Opera House on Monday and, according to an onlooker, went about the visit largely unnoticed.

He sported a casual baseball cap, blue polo shirt and trainers in Sydney.

Unless hidden in plain sight, any security teams were nowhere to be seen.

The onlooker who spotted Mr Gates later said: ‘Nobody else noticed who Bill was or approached him. He was obviously trying to keep a low profile.

Bill Gates sported a casual outfit and was seen standing by the mystery woman (Picture: SWNS)

The billionaire is in Australia on business (Picture: SWNS)

‘No one would have had any clue that one of the world’s richest and most powerful men was in their vicinity.’

Mr Gates is in Australia on business and met with the country’s prime minister earlier this week.

Seeing one of the world’s biggest pop stars include a trans man as the main paramour in the video is incredible (Picture: (L) Jamie McCarthy/Getty Images for MTV (R) Vevo/Taylor Swift / BACKGRID) The camera pans from a close-up of Taylor Swift in bed, but there’s someone lying next to her. A few moments later, […]

Fernandez was eager to join Chelsea this month (Picture; Getty) Chelsea are preparing one last final push to sign Enzo Fernandez from Benfica before the end of the month. Fernandez, 21, was the subject of intense interest from Chelsea who were prepared to pay over his £105m release clause. An offer of £112m was tabled […]