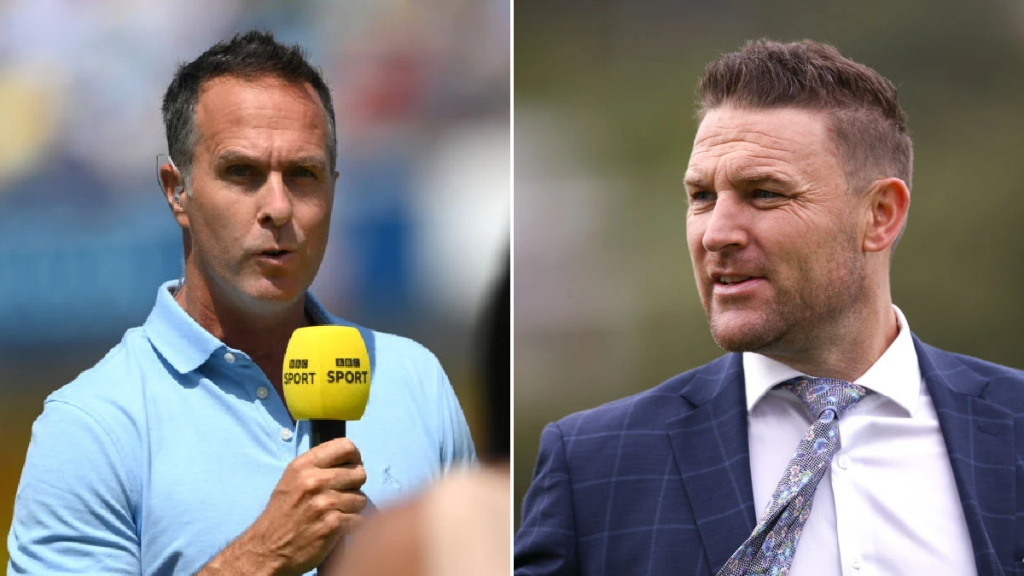 Michael Vaughan believes England’s appointment of Brendon McCullum as Test coach is a ‘big risk’ and admits the move makes him ‘nervous’.

McCullum, who has signed a four-year deal with England, will be in place for the Test series against his home country New Zealand in June.

The 40-year-old has never coached in first-class cricket but has established himself as one of the most highly-rated white-ball coaches in the world since retiring from playing in 2019.

‘England’s bold appointment of Brendon McCullum makes me nervous,’ he wrote in the Daily Telegraph.

‘If English cricket has overlooked someone like Gary Kirsten for a second time I do find it incredibly bizarre.

‘I don’t see how we have made that call twice. He is the perfect mentor, thinker and culture driver who has done it before and has the t-shirt.

‘What England have gone for in Brendon is exciting and a big name, but it is a big risk as well.

‘He is taking over England at the right time. They are at their lowest ebb since the mid 1990s.

‘He will not have to do much for us all to see a massive improvement but if it doesn’t happen quickly then there will be questions asked about his appointment and whether England would have been better off with a safer pair of hands, more experienced and know how to coach in Test cricket.

‘But one thing is for sure, we are in for an interesting ride.’

McCullum is known for his attacking style of play, both as a player and a coach, but Vaughan says his priority is to make England harder to beat.

England won just one of their last 17 Tests under former captain Joe Root, losing the Ashes 4-0 in Australia last winter and being beaten by West Indies in March.

‘I am all for attacking play and being aggressive but I don’t think this England Test team is in a position to play that way at the moment,’ Vaughan added.

‘They have to take small steps first, get used to …read more

Chelsea and Liverpool will contest this year’s FA Cup final (Picture: Getty) There’s around ten miles between the Kennington Oval and Wembley, venues for the first FA Cup final and the one being staged tomorrow, 150 years later. But never mind a century and a half, the distance between the sport in which Chelsea and […]

Bobbi Brown’s Jones Road What The Foundation has been the subject of controversy in the makeup world (Picture: Bobbi Brown) Bobbi Brown is an icon of the beauty world, with her ‘your skin but better’ looks beloved by celebrities and gracing the covers of Vogue and Elle. But the makeup artist has been embroiled in […]

Simon hit a nerve (Picture: GB News/REX) Piers Morgan has blocked former GB News presenter Simon McCoy after the pair clashed over TalkTV’s crumbling ratings. Despite putting himself forward as the poster boy to end cancel culture, Piers abruptly shut down a discussion with Simon when he called out the former Good Morning Britain host […]