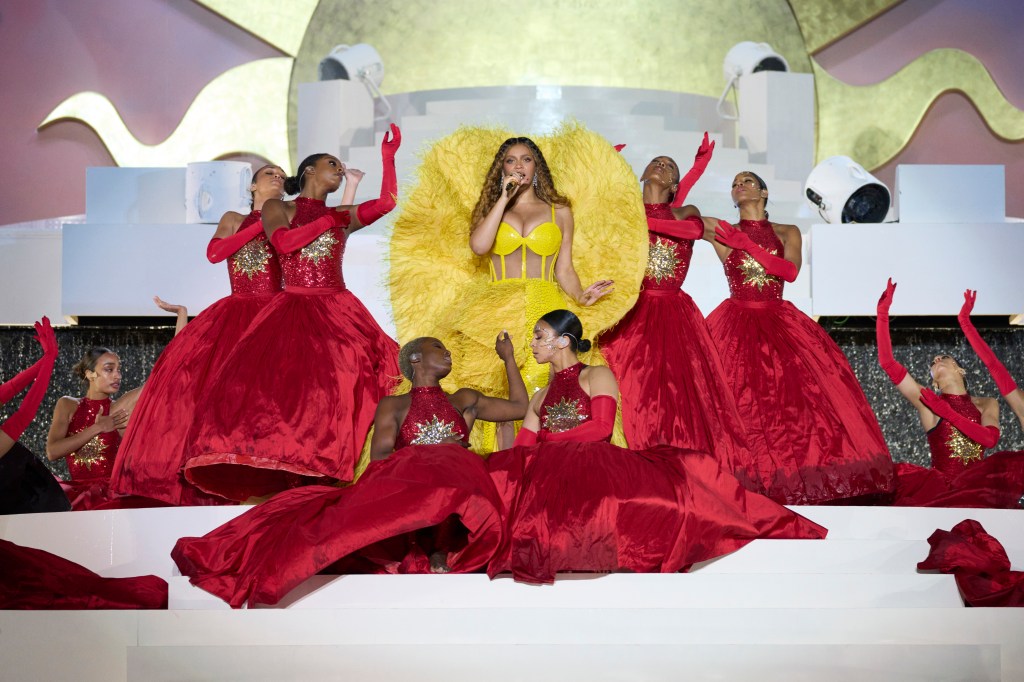 Beyonce put on a stunning performance in Dubai over the weekend (Picture: Getty)

It’s time to start planning your outfits and routines as Beyonce is planning to take Renaissance on a huge tour, according to her dad.

The Cuff It singer returned to the charts with an almighty bang last summer, thanks to her acclaimed album.

However, fans have been calling out for the 41-year-old to release music videos or visuals for the tracks, as well as any information on upcoming tour dates.

Despite a stunning performance in Dubai over the weekend, we’ve all been in the dark about when we can see Queen Bey on stage next.

Chatting to TMZ, Mathew Knowles urged the Beyhive to be patient, claiming the Oscar-nominee is planning a tour but will be making the announcement when she is ready.

She was also praised by mom Tina Knowles in the wake of the concert – which marked one of her biggest shows in years.

‘It was very beautiful,’ she told the publication, before being asked whether the mom-of-three had some nerves about her stage return.

‘Yeah, I think everybody does, a little bit,’ she replied, adding: ‘She killed it.’

However, Tina remained tight-lipped on the backlash against the music icon for performing in Dubai despite the country’s strict anti-LGBTQ+ laws.

Bey performed in front of a star-studded crowd for the lavish launch (Picture: Getty)

Beyonce took to the stage for her first headline concert since 2018, performing at a private launch for the grand reveal of Atlantis The Royal – billed as the world’s most ultra-luxury resort.

Metro.co.uk was lucky enough to be in the audience for the once-in-a-lifetime show.

The Grammy-winner performed some of her biggest hits in the set, kicking things off with a stunning rendition of Etta James’ hit At Last.

At one point, she was joined by eldest daughter Blue Ivy for a surprise duet, before ending the show with a spectacular fireworks display.

Speaking to her fans, she said: ‘There’s a Utopia of people from all over the world on this stage and we are so honored to be here to celebrate this night with you.

‘My parents are here tonight to celebrate – my mother and my father. My beautiful children are here to see me perform and my beautiful husband.’

If you’ve got a celebrity story, video or pictures get in touch with the Metro.co.uk entertainment team by emailing us celebtips@metro.co.uk, calling 020 3615 2145 or by visiting our Submit Stuff page …read more

Cody Rhodes is going to WrestleMania after his Royal Rumble win (Picture: WWE) WWE has revealed the 2023 Royal Rumble smashed some incredible all time records. The company has revealed this year’s 36th edition of the iconic annual event, which saw Cody Rhodes and Rhea Ripley emerge victorious in the respective men’s and women’s matches […]

The midfielder had 45 minutes to forget on Friday night (Pictures: Twitter / ITV) Albert Sambi Lokonga headed straight down the tunnel after being given an on-pitch grilling from captain Martin Odegaard during Arsenal’s FA Cup defeat to Manchester City. The 23-year-old was introduced at half-time at the Etihad on Friday night in place of […]