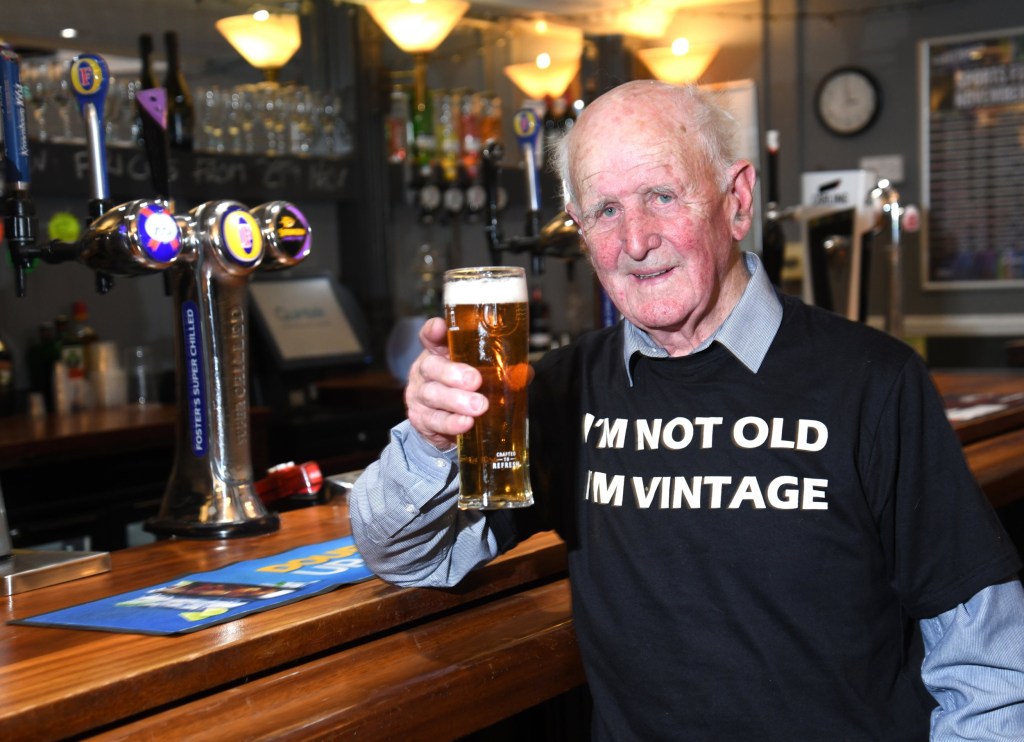 When Bernard Bland made his first trip to the Nunsthorpe Tavern in 1954, a pint set him back eight shillings and 10 pence.

That’s the equivalent of 45p in today’s money. Sixty-eight years later, Bernard is still going to his beloved Grimsby boozer.

In fact, he’s been going there every day for seven decades – only missing his daily session when the tavern closed during lockdown.

Over the years Bernard has celebrated anniversaries with his wife Betty, and had many a laugh with friends over a beer or two.

The biggest change he’s seen is the rising cost of a pint, which he says is one reason why fewer people are going to their local.

Bernard has started using meals on wheels to cut down the costs as he plans on having many more rounds yet.

‘The place used to be full to the brim with people,’ he said. ‘But with balancing the cost of electric and gas nowadays too, going to the pub isn’t something everyone has the money to do.

‘I live on my own so thankfully my gas and electric are alright, but I have started getting meals on wheels from a very kind friend to help me get through.’

On his 92nd birthday yesterday, Bernard reminisced about the endless hours he spent at the tavern with Betty, who lives in a care home.

He said: ‘I met Betty whilst we were both on a paper round as kids. I would always get mine finished early so I could help her with hers.

‘We came here for our 60th wedding anniversary… She’s certainly the boss, I just say yes and nod in the right places, she’s my whole life.’

Bernard said there was no massive secret to their happy life together, they just made sure not to fall out over the little things.

He added: ‘We always end up in here, it’s like her wheelchair has a Sat Nav that takes us here. But it’s great because everyone is so friendly and I’m supporting my local pub at the same time.’

Bernard was overwhelmed when he found out his friends at the pub had organised a surprise birthday party.

He added: ‘I have been a bit depressed recently if I’m honest and the party has really cheered me up I have to say.’

Another death looms (Picture: ITV) The thing about a serial killer storyline in a soap is, you can’t have the murderer commit the crime too often – it’s got to be sporadic, random, to allow the storyline to air over many, many months. This is the case for Stephen Reid (Todd Boyce), who murdered Leo […]

Should Matt Hancock be judged on pandemic inquiry outcome or I’m A Celebrity…?

This is what got readers talking today (Picture: Metro.co.uk) Matt Hancock coming in third place in I’m A Celebrity… has reignited the debate once again over his conduct during his time as health secretary. Some readers have said that his breaking of his own social distancing ‘guidelines’ is what people should really be focusing on, […]

Ultra-feminine (Picture: Getty/Dior/Cult Beauty) This article contains affiliate links. We will earn a small commission on purchases made through one of these links but this never influences our experts’ opinions. Products are tested and reviewed independently of commercial initiatives. One beauty trend that’s predicted to be big for next year is coquette makeup, a style […]