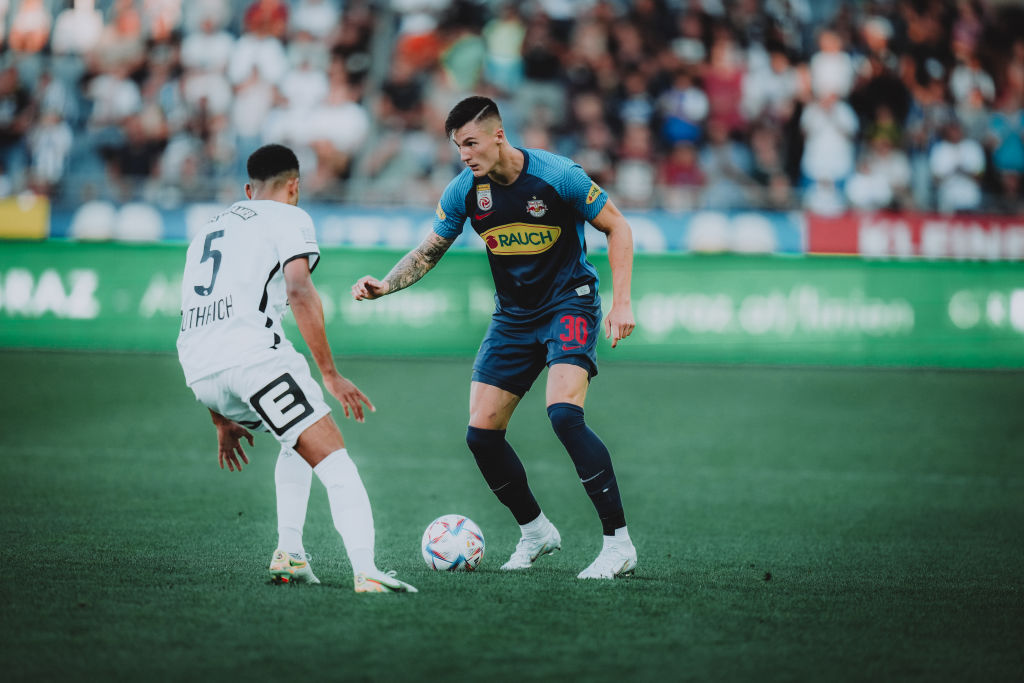 Benjamin Sesko has decided to stay at Red Bull Salzburg for another full season (Picture: Getty)

Red Bull Salzburg striker Benjamin Sesko has made a decision over his future amid interest from Chelsea and Manchester United, according to reports.

Salzburg are demanding in excess of £50m for the 19-year-old Slovenia international, who United could have signed in 2019 for as low as £2.5m.

Sesko’s representatives have met with both clubs – who face further competition from Newcastle – with all three Premier League sides keen on signing him.

Sky Sport Austria, though, are now reporting that Sesko has decided that he wishes to stay at Salzburg for the 2022-23 season despite the interest from Chelsea, United and Newcastle.

‘Benjamin Sesko wants to stay in Salzburg for another year so that he can make the leap like Erling Haaland,’ Sky Sport Austria reporter Marko Stankovic said.

‘That’s Sesko’s plan. Next year we will talk about a really good transfer.’

Sesko is Erik ten Hag’s priority target in attack, with the Dutchman desperate to add some firepower to his frontline.

Chelsea lost Romelu Lukaku to Inter Milan this summer and are also lacking a main striker.

Sesko is a 6’4″ forward who has already been capped 13 caps for Slovenia, scoring two goals, having only turned 19 in May this year.

He scored 11 goals in all competitions last season and registered the only goal in a friendly win against Liverpool in pre-season.

‘It’s probably a summer too early for him, but every club is looking at the price Liverpool paid for Darwin Nunez and thinking it might cost them an extra £20m if they wait another 12 months,’ a source recently told iNews.

‘Salzburg need Sesko for the Champions League, they’re not encouraging a sale. But that’s a different thing from the player not being for sale, and they’d listen to offers.’

Salazburg are the current champions of the Austrian Bundesliga, which they have won every year since 2013-14.

Blizzard has some untrustworthy friends (or family) Diablo 4 (pic: Blizzard) Despite being meant only for trusted friends and family, footage of the Diablo 4 alpha has leaked online anyway – if only briefly. The recent alpha for Diablo 4 was meant to be only for ‘friends and family’ and yet it’s still ended up […]

‘It stinks!’ Danniella Westbrook is advising DM sliding men on how to get onto Big Brother

Big Brother will return to screens next year (Pictures: ITV) EastEnders star Danniella Westbrook has revealed she’s started receiving messages from her followers who are all keen for tips on how to get onto the returning series of Big Brother. The reality show, which used to air on Channel 4 and Channel 5, will be […]

Your daily horoscope for Friday, August 5, 2022

Cancer, relief and happiness will come as you finally decide what you want to do (Picture: Getty/Metro.co.uk) It all seems like we are on the starting line as the race for new adventures, opportunities and relationships are about to get the green light for go. But we will have to be on our toes to […]