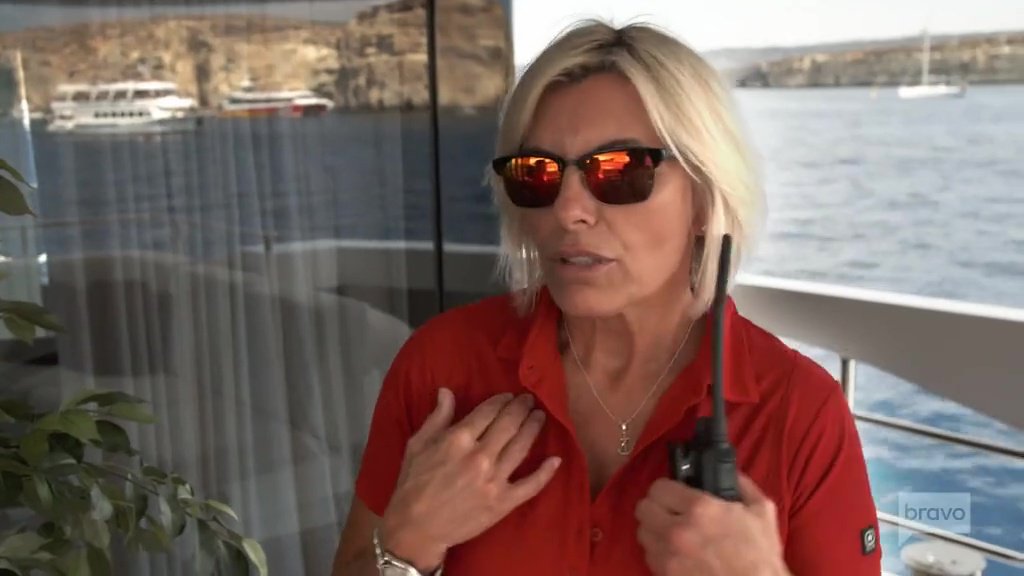 The bosun recently confirmed that she will not be returning to the Med spin-off of the Below Deck universe, leaving us all waiting to find out who would be in charge of the deck crew.

But it turns out the newbie has a lot of work to do, as she’s seen being given a stern talking to by Captain Sandy Yawn.

‘You gotta manage this deck. I don’t want to be the bosun,’ she warns as the gang take the chaos to Malta.

Raygan is joined on the deck by returning castmate Mzi ‘Zee’ Dempers, as well as new stars Storm Smith and Jason Gaskell.

There is a mostly new crew on board for season 7 (Picture: Bravo TV)

She manages to land herself in a possible ‘boatmance’ with new chef Dave White, with Mathew Shea not coming back for another stint at sea – after he took aim at Captain Sandy’s leadership skills in a savage comment.

‘The chief stew and the chef have to work well together,’ Sandy teases of the new relationships on board. ‘It permeates through the boat.’

According to a synopsis, via US Weekly, things aren’t quite smooth sailing between the pair, when ‘surprising friction in the galley intensifies between the Chief Stew and Chef, who came onto the boat as colleagues and friends’.

It is also a chaotic charter season for the exterior team when one deckhand ‘is unable to adapt to the high demands’ – but will this lead to more tension between the crew?

We’ll get our answers when Below Deck Med returns with a supersized premiere on July 4 on hayu, before airing on Bravo the following week, on July 11.

Malia confirmed that she will not be returning to the fold last month, explaining that she had briefly hung up her epaulets.

Speaking about her exit, she insisted that it has nothing to do with the backlash from fans over her involvement in former chief stew Hannah Ferrier’s axe, vowing: ‘I didn’t leave for that reason.

Malia White has not returned for the new episodes (Picture: Bravo TV)

‘I haven’t left. It’s not that I might never come back to the show. I’m just not on the next season. I got in a really bad scooter accident. And I’m studying for this big [exam], so it’s just a good time for me to take a break and take a step back. And the misconceptions are on the show [that] I got a lot of heat for the whole …read more

A fail or a big hit? (Picture: Édaein o’ Connell) Can you remember the first time you had a sip of Coca-Cola? I can, vividly. At the age of five, I was introduced to the sugar-filled drink. I was so enarmoured with it that I drank an entire two-litre bottle in one sitting and subsequently […]

Raducanu into the second round (Picture: Getty) Emma Raducanu has progressed into the second round of Wimbledon after victory over Alison van Uytvanck. Making her Centre Court debut, the 19-year-old sealed a 6-4 6-4 win against the world no46 on Monday evening. 10th seed Raducanu had seen her grass-court preparation disrupted by a minor injury […]

The 18-year-old accused gunman may be sentenced to death after he killed 10 people at a supermarket in western New York (Pictures: Getty Images) Federal prosecutors filed hate crime charges against the white man accused of opening fire and killing 10 black people in a racist attack at a supermarket in Buffalo, New York last […]