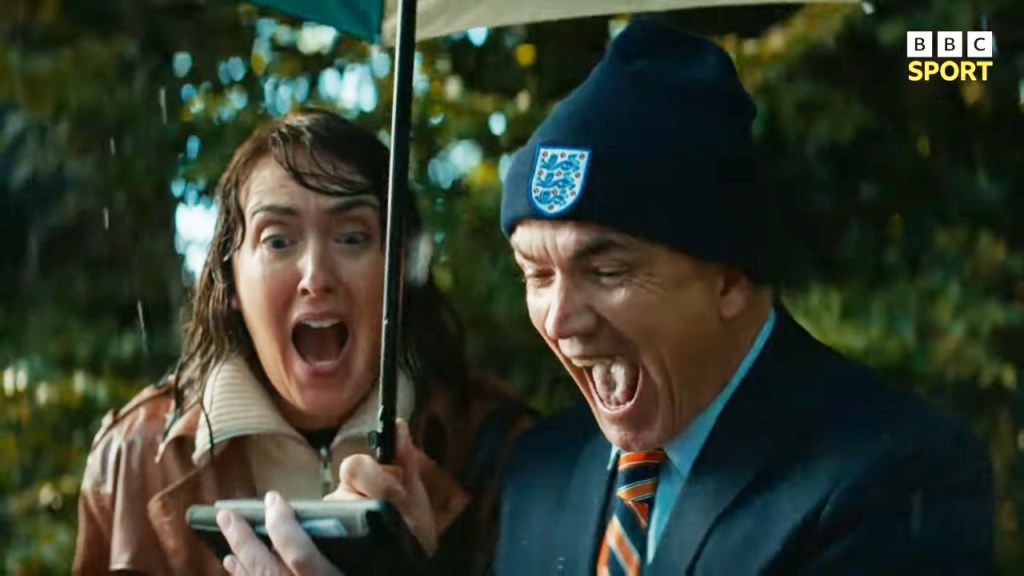 An advert released by the BBC to promote its coverage of the World Cup has come under fire for its messaging, with the trailer described as ‘depressing’ and criticised for seemingly condoning ‘bad treatment of others’.

In the trailer, which is titled ‘It’s the World Cup though’, a voiceover states that ‘we all love the World Cup’, before adding that ‘a funny thing happens’ during the tournament ‘where we’re not really our usual selves’.

Various scenarios are then shown on screen, including a man with an umbrella ignoring a woman being soaked through by pouring rain, a mother not listening as her child tries to get her attention and a man talking at his neighbour about the football.

‘Employees seem less effective, and employers don’t seem to care. Lovers are more distant. Masters forget walkies. Even Santa loses his festive spirit,’ the voiceover states, as a disappointed dog flops on the ground after its owner forgets to take them for a walk.

‘People are less respectful. It’s the World Cup though. Here, once every four years. So why not make the most of it,’ the voiceover concludes.

One person on YouTube said they had a ‘big issue’ with the advert due to the levels of domestic abuse that occur during football events like the World Cup.

The trailer features a variety of scenarios (Picture: BBC)

Previous research conducted by the University of Lancaster found that when England loses football matches, incidents of violent domestic abuse can increase by 38%, while incidents can also increase by approximately 26% if the team wins or draws.

The YouTube commenter continued: ‘“Lovers grow distant” a mum ignoring her child. This advert may show minor versions of bad treatment of others when your emotions are flying high with this sport but there is a real issue in reality when partners and children are beaten based on a football game score. So “it’s the World Cup though” to justify all of these situations is in incredibly bad taste.’

Another said that they found the trailer ‘depressing’, while someone else dubbed it ‘awful’.

A child is shown being ignored by a Santa Claus actor (Picture: BBC)

‘We all love the World Cup,’ the voiceover in the advert says (Picture: BBC)

‘This is a shockingly disgraceful [trailer]. NOT everyone loves the World Cup and some women live in fear of football results. Football (or anything else on TV) is NOT an excuse for behaving badly. This should be taken off the air and taken down from the internet immediately,’ one critic stated.

Over on Twitter, someone else remarked: ‘Is anyone else disgusted @BBC’s World Cup advert? It basically says it’s ok to be more rude, selfish, disrespectful & neglecting of animals & kids cause The World Cup’s on… well done for making this …read more

EastEnders spoilers: Janine calls off wedding to Mick after catching him with Linda

Just how final is Janine’s decision? (Picture: BBC) Janine (Charlie Brooks) was in a sad and low-key mood in tonight’s EastEnders. After her recent fall, and being told that there could be complications for the baby, she was feeling worried and tense. Mick (Danny Dyer) did what he could to be reassuring, but when it […]

Some 31 of the victims recorded since July were just two years old or younger (Picture: Getty) Paedophiles are spamming the internet with links to videos and pictures of children and babies being raped. The more the ‘hideous’ content is shared, the more points the person who first posted it acquires. They can then use […]