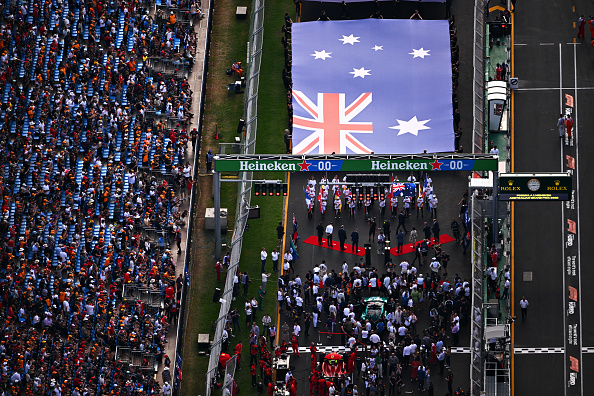 F1 has been racing in Australia since 1985 (Photo: Getty)

The Australian Grand Prix is set to remain on the Formula 1 calendar after organisers signed a new contract with the sport until 2035.

The race, held at the Albert Park street circuit in Melbourne, returned this year after a two year absence due to the COVID-19 pandemic, with a record 419,000 spectators turning up to watch Ferrari’s Charles Leclerc take victory.

Australia has been a staple of the F1 calendar since its first grand prix in 1985 at Adelaide, before moving to its current venue in 1996, and has typically hosted either the season finale or opener.

While always a popular event with locals, Albert Park has often been cited as one of the duller circuits for racing, which had left its future in doubt with its previous contract due to expire in 2025.

But modifications to the track ahead of this year’s race and the overwhelming fan support meant its renewal was inevitable according to F1 president and CEO Stefano Domenicali.

‘The race has always been a favourite for the fans, drivers and the teams and Melbourne is an incredible and vibrant international city that is a perfect match for our sport,’ the Italian said.

‘This year we saw huge crowds and passionate fans at the Grand Prix, and we are very excited by the future in Australia as our sport continues to grow. We are all looking forward to being back in Melbourne next season with all our fans.’

While this news will have excited fans, there are many concerns about the future make-up of the F1 calendar, with the inclusion of brand-new races in Miami, Las Vegas, Qatar and more potentially pushing the racing schedule to breaking point.

As it stands, there could be as many as 26 races in 2023, with a deal for the return of South Africa also very close, but drivers and teams have already warned that the current 22-race season is bordering on the edge of unfeasible.

As a result, fans are extremely concerned that more historic grand prix will be forced to make way, with Monaco and the beloved Belgium race at Spa the most likely to drop off the calendar, with both venues out of contract at the end of this year.

Mexico and France are also in immediate danger, while there are concerns that the Chinese Grand Prix may also be removed due to the country’s travel restrictions caused by COVID-19.

MORE : Mercedes must solve porpoising problems themselves rather than wait on rule change, says Martin Brundle

The Lazarus Project’s Paapa Essiedu: ‘A story like this demands the cast that it’s got’

To view this video please enable JavaScript, and consider upgrading to a web browser that supports HTML5 video The Lazarus Project leads Paapa Essiedu and Anjli Mohindra have praised the sci-fi series’ accurate representation to the real world through its diverse casting. I May Destroy You’s Paapa plays George, who discovers his world has been […]

Lily D. Moore has big plans for her career (Picture: Rex/@lilydmooreofficial) Actress Lily D. Moore has revealed her career goal is to become the first actress with Down syndrome to win an Oscar. Lily, 19, has been acting since the age of six after falling in love with it after her first drama class, which […]

Kim Kardashian headed out in New York ahead of her Today Show appearance (Picture: GC Images) Kim Kardashian has revealed that her weight loss efforts have continued, following her Met Gala appearance. While on the red carpet at the exclusive bash last month, for which she controversially donned Marilyn Monroe’s iconic gown, she explained that […]