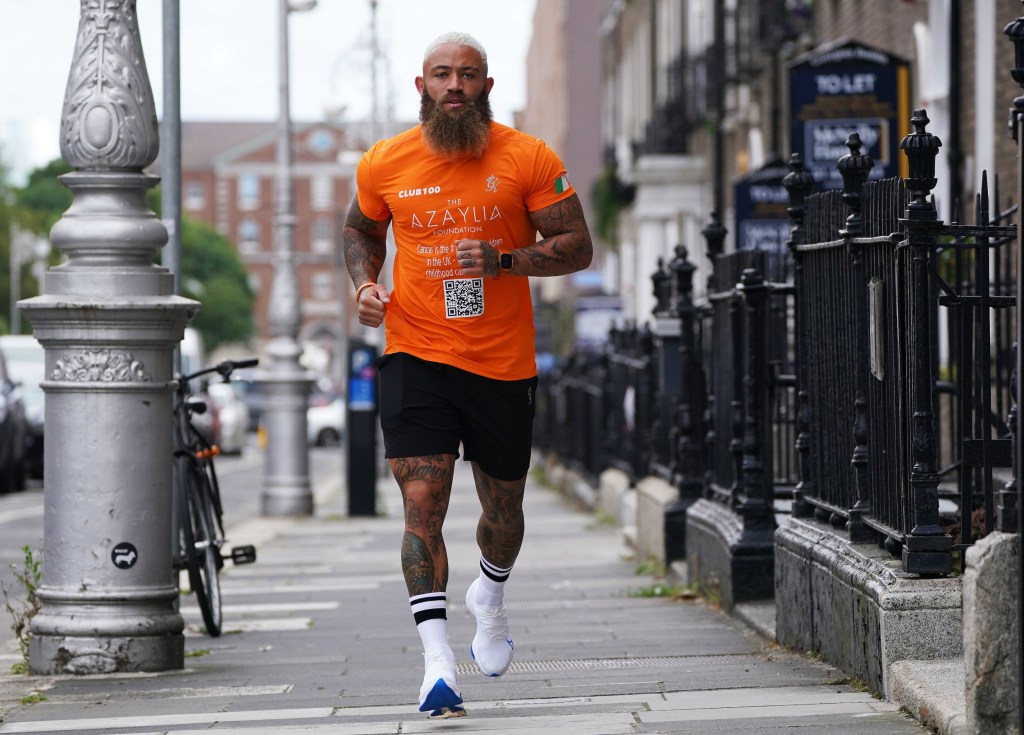 Ashley is now one run down in his five marathon challenge (Picture: PA)

Ex-footballer Ashley Cain has started the first of five planned charity marathon runs in aid of a foundation in honour of his late daughter that will span across five major cities in Ireland and the UK over the next five days.

The runs are to mark the second birthday on August 10 of his daughter Azaylia, who died of ‘a rare and aggressive’ form of leukaemia last April aged eight months.

Ashley and Azaylia’s mum, Safiyya Vorajee, had hoped to take her to Singapore for specialist treatment to save her life, but were tragically told her condition had worsened and it was no longer an option.

His route through Dublin on Wednesday began at Fitzwilliam Square, passed Stephen’s Green and went through the Phoenix Park, Crumlin, Terenure and Ballsbridge before finishing back in the city centre at just before 4.30pm.

He will then undertake marathon routes in Belfast on Thursday, Glasgow on Friday, Cardiff on Saturday and finish in London on Sunday.

Ashley, who played for Coventry City and later featured in reality TV show Ex On The Beach, founded The Azaylia Foundation to help fight childhood cancer through advancing early diagnosis and new treatment availability in the UK.

He ran with cousin Tamika Cain and is set to be joined by others over the course of the next few days (Picture: PA)

After completing a 100-mile ultra marathon in April, Ashley is to undertake three further athletic challenges this month, starting with these five marathons in five days across the five cities.

The star will be joined by friends, family and public figures along the routes, having received support from cousin Tamika Cain and Rehan Khalid for today’s run.

Taking to Instagram after his first marathon, Ashley, who was looking forward to a pint of Guinness, said: ‘First of five, done and dusted. Dubs, it’s been a pleasure. Four more to go.’

The star was all smiles as he completed his first marathon of the week (Picture: Instagram/mrashleycain)

Ashley shared Azaylia with former partner Safiyya, with the pair announcing their split just weeks ahead of the first anniversary of their baby daughter’s death.

They had initially kept the news private for a few months so they could come to terms with it, calling their separation ‘an incredibly hard decision’.

Todd Boehly has made his first ‘big mistake’ at Chelsea, claims William Gallas

In April, Safiyya revealed that their relationship was ‘stronger’ after their split.

Lisa said she, Courteney and Jennifer are like ‘sisters’ (Picture: NBC/Getty) Lisa Kudrow has opened up about how she became more aware of her body when she was on the set of Friends, describing the experience as ‘jarring’. From 1994 to 2004, Lisa starred as the fan-favourite Phoebe Buffay on the widely beloved sitcom, alongside […]

When do sunflowers bloom in the UK?

When is prime sunflower time? (Picture: Getty) If there’s ever a flower to cheer you up, or lift your spirits, it’s the sunflower. Pleasingly yellow, tall and calming, the sunflower tends to pop up when the sun is out in summer. It took on a special meaning earlier this year, though, as the national flower […]