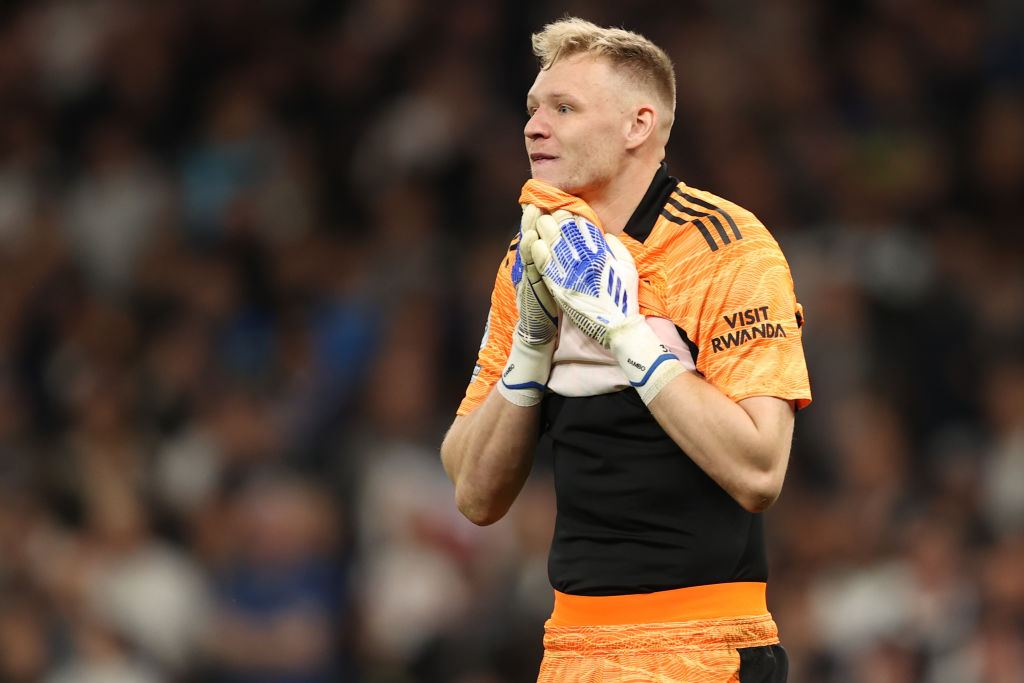 Aaron Ramsdale has pointed the finger at referee Paul Tierney for Arsenal’s 3-0 mauling at the hands of Tottenham in Thursday night’s north London derby.

The Gunners were feeling sorry for themselves after the humbling defeat, bemoaning a penalty decision given against them and Rob Holding being shown two yellow cards in the first half.

While the penalty given against Cedric Soares for a shove on Son Heung-Min may have been seen as soft, it was certainly a foul, and Holding’s two yellow cards also appeared fair enough.

However, Arsenal manager Mikel Arteta was fuming about the decisions after the match and his goalkeeper also disagreed with how Tierney saw things.

‘Yeah, it’s obviously not what we came here for,’ Ramsdale told Arsenal Media at the Tottenham Hotspur Stadium.

‘We came here for three points, personally, decisions went against us tonight.

‘I’ve not seen replays, we’re an honest bunch of lads, so when we see the replays and if it is a penalty and it is a sending off, we’ll be the first to admit it, but on first glance, I feel like the big decisions went against us and then it’s an uphill battle from there.’

Harry Kane converted the spot-kick after 22 minutes and Holding was sent-off 11 minutes later before the England captained doubled the lead shortly after.

‘It was a short space of time and we’ve gone from looking comfortable in the game at 0-0 to 2-0 down and then it’s a lottery,’ said Ramsdale.

‘If you get the next goal, the crowd can get a bit nervous and we could be back in the game, and unfortunately, we conceded just after half time and that’s game over.’

Rob Holding was dismissed after a second yellow for a foul on Son (Picture: Getty Images)

The Arsenal camp seemed united in their disbelief over the referee’s decisions, with Arteta admitting he could not air his true feeling or he would face punishment.

Asked if he was unhappy with his players, he said: ‘With my players, no [not unhappy]. I’m so proud of my players.

‘It’s a shame because a beautiful game was destroyed today.’

Russia to cut electricity to Finland tomorrow over ‘payment issues’

(Picture: Getty Images/iStockphoto) A Russian state energy company will stop supplying power to Finland from tomorrow. Electricity imported by Inter RAO will be suspended ‘for the time being’ due to difficulties in receiving payments. This is a breaking news story – more to follow. Get in touch with our news team by emailing us at webnews@metro.co.uk. […]

Antonio Conte believes Tottenham should have beaten Liverpool at Anfield (Getty) Antonio Conte has accused Jurgen Klopp of looking for excuses following his criticism of Tottenham’s tactics in their 1-1 draw with Liverpool last Saturday. Following the draw at Anfield which subsequently allowed Manchester City to move three points clear at the top of the […]

Jodie is currently expecting her second child (Picture: Raw Image LTD/MEGA) Jodie Whittaker has been seen for the first time since her Doctor Who replacement was announced, with Ncuti Gatwa set to take over as the Time Lord later this year. The news broke over the weekend, with the BBC sci-fi series confirming that Sex […]