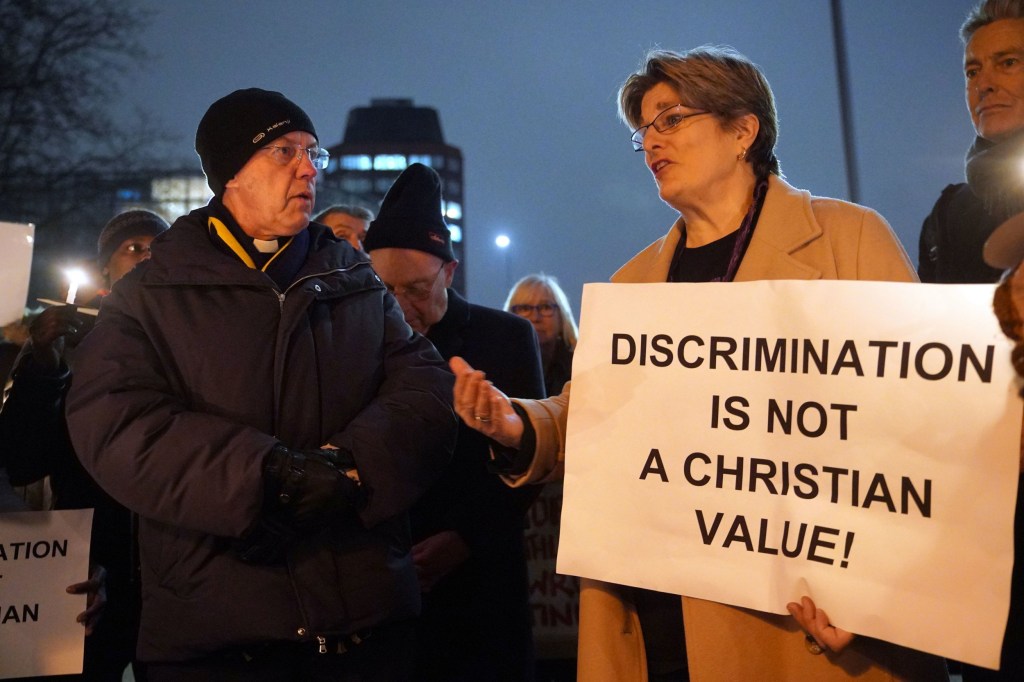 The Archbishop of Canterbury, Justin Welby (left) speaks with Jayne Ozanne (right) and other LGBT+ campaigners and their allies outside Lambeth Palace (Picture: PA)

The Archbishop of Canterbury has been accused of failing to show leadership in ending discrimination against LGBT people after he appeared at a protest about equal marriage rights.

Justin Welby spoke to around 40 activists who gathered outside his London residence of Lambeth Palace asking for same-sex couples to be allowed to marry in church.

They were supported by politicians including Baroness Ruth Hunt and the Conservatives’ Ben Bradshaw.

Mr Welby said he can understand why it is painful for LGBT people to be denied the same marriage rights but said church institutions globally are ‘deeply divided’ over the issue.

He told protesters: ‘To get something through – to get equal marriage – would need legislation, and legislation has to carry by two-thirds in each house of Synod.’

Mr Tatchell said the Archbishop’s appearance at the protest was a ‘PR move’ and did not illustrate a willingness to help further their cause.

He said: ‘It was good that the Archbishop came out to meet us but he didn’t say anything of substance.

‘He just reiterated his stance opposing same sex marriage – and that is discrimination.’

Asked if Mr Welby’s presence indicated he might be willing to engage with protesters in the near future, Mr Tatchell said: ‘No.

‘I think it was a good PR move and it was good that he engaged with us but he did not move anything forward.

‘He has not shown leadership. He has just sat on the fence.’

Church of England is the official state religion but it defies the stateâs endorsement of equal marriage. You cannot have a state church that does not reflect the stateâs commitment to equality. Disestablish the homophobic Anglican church! pic.twitter.com/ATj0xBPTUc

Mr Tatchell said the Archbishop’s refusal to personally bless same-sex couples despite welcoming proposals for others within the church to do so is an act of ‘appeasing homophobes’ in the institution.

‘LGBT people are being sacrificed in the name of church unity,’ he said.

‘That is not a Christian approach.’

Ms Ozanne said one ‘palpable action’ from the Archbishop was that he had asked for a list of names of people who ‘preach messages that harm LGBT people’ so he could ‘deal with’ the issue.

Asked how difficult it is to be …read more

The real-life Coyote Ugly bar is the stuff of legends (Picture: Getty/@coyoteuglynyc) Coyote Ugly founder Liliana ‘Lil’ Lovell has lifted the lid on the wild success of her infamous bar – and the iconic film it inspired – as the New York institution celebrates its 30-year anniversary. Lil threw open the doors to the East […]

The Moroccan had flown to Paris and the loan had been fully agreed (Picture: Getty) Hakim Ziyech’s move to Paris Saint-Germain appears to have collapsed at the very last minute after a paperwork blunder from Chelsea, according to reports. The Moroccan had been granted permission to leave Stamford Bridge on deadline day after Chelsea’s massive […]