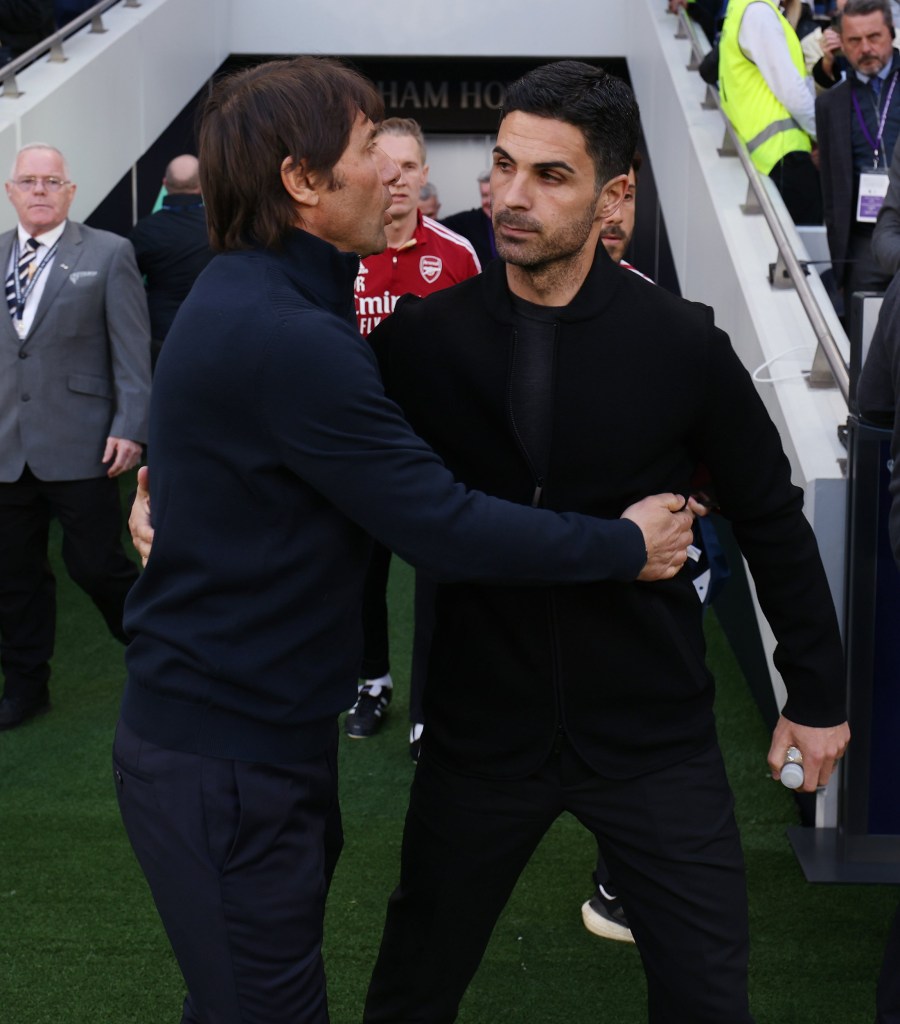 Antonio Conte has been accused of patronising Mikel Arteta after Tottenham’s 3-0 victory over Arsenal on Thursday evening.

The Gunners lost ground in the race for a Champions League place as Harry Kane’s double, plus a goal from Son Heung-min, sealed a 3-0 victory for Spurs over their north London rivals.

The result means Spurs are just a point behind Arsenal with two Premier League games remaining for both sides.

After the game, Arteta was furious with referee Paul Tierney after he awarded Spurs a penalty in the first half before sending off Rob Holding for a second bookable offence on Son.

But in his own post-match press conference, Conte hit out at Arteta’s complaints.

‘Mikel Arteta is doing a really good job but I listened to him complain a lot,’ said the Spurs manager.

‘I think he has to be focused more on his team and not complaining.

‘The red card for me was clear. If we want to complain we could do it every game.

‘This is my advice. If he wants to take my advice it’s up to him. I don’t care. In six months I have listened to him complaining a lot. It’s not good.’

But former Crystal Palace owner Simon Jordan has accused Conte of being ‘condescending and patronising’ towards Arteta.

‘I don’t know how he has the audacity to comment on the fact Arteta moans and groans about things, all of them do the same thing,’ Jordan told talkSPORT.

‘I don’t think Mikel Arteta was asking for advice on his coaching from Antonio Conte.

‘And maybe Antonio Conte could take some advice about acting like a mature individual when things aren’t going his way. He had a temperamental hissy fit two or three months ago, ‘I don’t think I’m good enough’.

‘The bottom line is I don’t know why Antonio Conte needs to dispense his particular brand of wisdom to Mikel Arteta.

‘I’m sure it’s because it was a leading question, but notwithstanding it, you don’t have to answer the question by being slightly condescending and patronising about the nature of the person’s experience in the profession.’

How to have a great Thursday (Picture: Getty/Metro.co.uk) Thursdays come and go: but try and make this one just a little bit special. We’ve got loads of great advice, whatever your star sign. Time to trust your instincts, Gemini. Restore your spirits with a useful chat, Libra. Ahead, you’ll find all the star signs’ horoscopes […]

Marvin Ekpiteta has been left ’embarrassed’ after historic homophobic tweets resurfaced in the wake of Jake Daniels’ coming out (Picture: Getty) Blackpool defender Marvin Ekpiteta has apologised for historical homophobic social media posts which have left him embarrassed in the wake of team-mate Jake Daniels coming out. On Monday, the 17-year-old Blackpool forward came out […]

Gabriel Jesus could be available this summer (Picture: Getty) Kevin Phillips believes Arsenal have the edge in the race to sign Manchester City’s Gabriel Jesus this summer. Jesus, 25, is out of contract at City next year and is looking for a fresh start away from the Etihad. According to reports, Arsenal are interested in […]