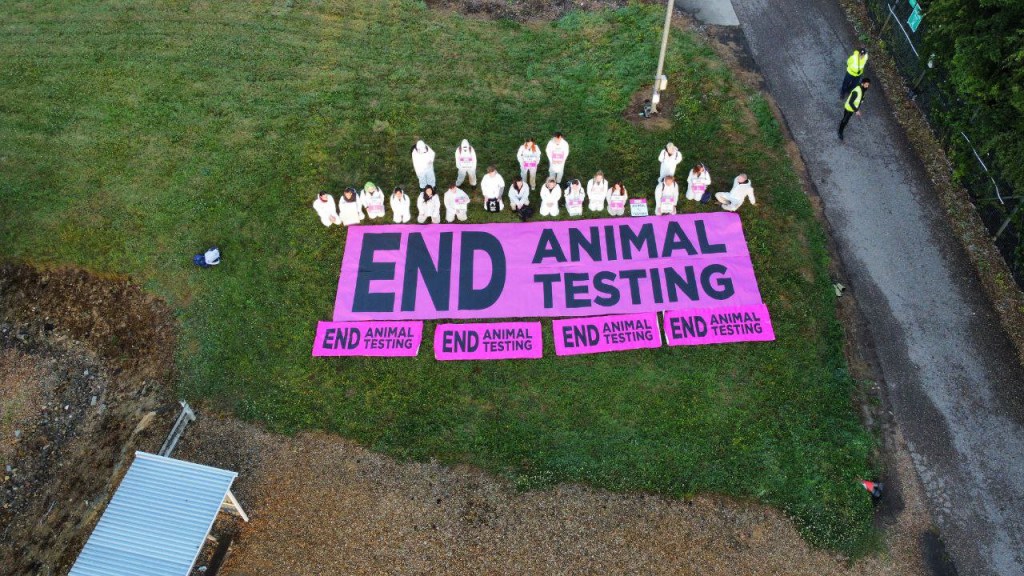 Nearly 30 animal rights protesters have attempted to occupy one of the UK’s largest dog-breeding facility, demanding an end to animal testing.

Demonstrators from the Animal Freedom Movement (AFM) gathered at Marshall BioResources’ (MBR) Acres in Cambridgeshire the early hours of this morning, calling for the facility to be shut down and the dogs rehomed.

Pictures show numerous police vehicles at the site in Huntingdon, with activists dressed in white sat on the ground carrying banners.

The group told Metro.co.uk earlier that 12 of their 25 activists had been arrested.

Metro.co.uk has attempted to contact Cambridgeshire Constabulary multiple times but has not received any response.

The AFM want the UK to phase out animal testing completely by 2025 and back a ban on all animal-tested products by the same year.

Numerous reports have identified the MBR Acres site as a location used to breed dogs, including many beagles, used for UK animal tests.

Protesters said earlier that 12 arrests had been made (Picture: Animal Freedom Movement)

Activists said this morning that they hoped to occupy the site until commitments towards their demands were made by MBR and The British Government.

Spokesperson Dillon Parsons explained: ‘Using animals for testing is not only cruel, inhumane, and barbaric, it is completely unnecessary.

‘There is no need for nearly 3 million painful and torturous tests on animals in the UK each year when we have technology that is more reliable and efficient.

‘The UK claims to be a nation of animal lovers, we demand The Government and MBR show that to be true.’

Beagles are reportedly among the animals on the site (Picture: Animal Freedom Movement)

Activists back a ban on sales of animal products (Picture: Animal Freedom Movement)

Disputed reports claim that 90% of tests on animals are ‘useless’ – but advocates suggest there is little alternative if human testing cannot first be undertaken.

A YouGov poll last year suggested that more than four in ten Brits oppose companies being allowed to test medicines on animals – and nearly three quarters are against testing cosmetics on animals.

One protester at the facility, Rosa Sharkey, said: ‘The science is clear, our morals should be too, an end to animal testing is the only step forwards for the industry.

‘MBR must do the right thing by closing its Cambridgeshire facility and rehoming the puppies. The British government has a clear mandate from its people to end the barbaric practice of animal testing’

Government data suggests that in 2020, 2.88 million tests were undertaken on animals in the UK.

To view this video please enable JavaScript, and consider upgrading to a web browser that supports HTML5 video Jay Younger isn’t the only one who’s set to butt heads with Ekin-Su Cülcüloğlu on Love Island, with a teaser revealing that Jacques O’Neill is also going to become embroiled in a heated row with the soap […]

Man, 31, stabbed to death outside Wetherspoons pub in ‘unsafe’ area

A forensic tent has been set up outside the Wetherspoons where the man was killed (Pictures: LNP) An ‘urgent investigation’ has been launched after a 31-year-old man was knifed to death outside a west London pub. He was killed outside The Moon Under Water Wetherspoons in Hounslow in the early hours of Saturday morning. He […]