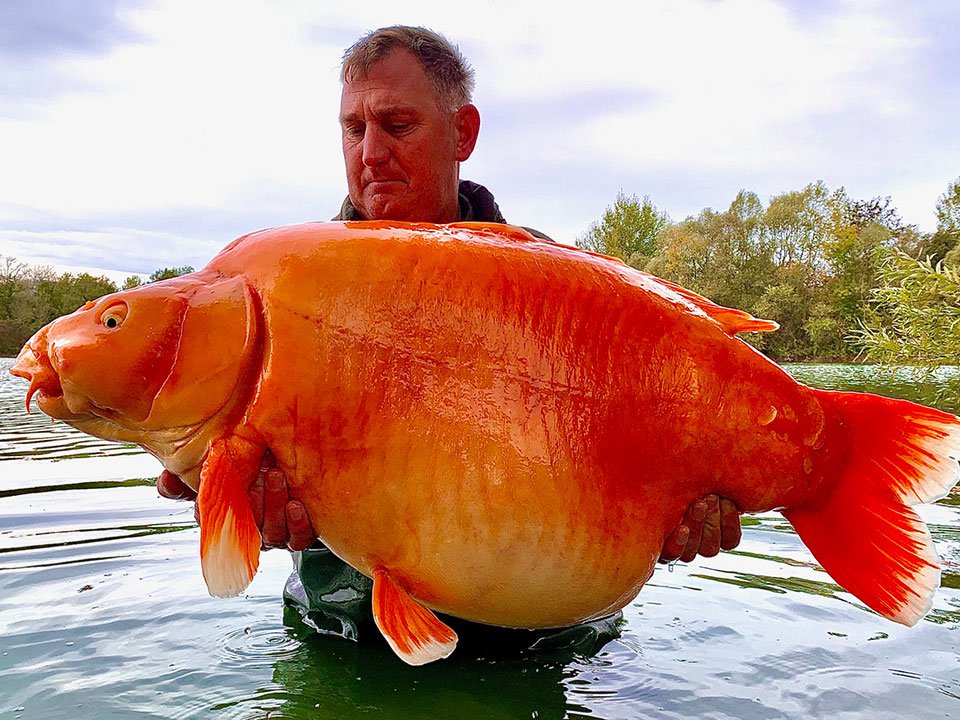 The massive koi carp looks like an oversized version of the common household pet (Picture: JasonCowler/BNPS)

A British fisherman has caught what looks like the biggest goldfish on the planet.

Angler Andy Hackett was delighted to land the very unusual catch while on holiday in France.

The 42-year-old realised the nibble on his line was from a giant nicknamed The Carrot weighing over 30kg.

It took him 25 minutes to reel in the fish, which is a hybrid species of a leather carp and a koi carp.

The Carrot is believed to be over 20-years-old and was put in a lake at a fishery in France run by Brit Jason Cowler when it was young.

But it has proven an elusive fish to catch over the years and is rarely seen out of the water.

It was 30lbs heavier than what was considered to be the world’s biggest goldfish caught by Jason Fugate in Minnesota, US, in 2019.

And it was more than double the size of a 30lbs bright orange koi carp caught by Italian Raphael Biagini in the south of France in 2010.

The British angler battled with the catch for 25 minutes (Picture: JasonCowler/BNPS)

Andy, a company director from Kidderminster, Worcs, caught his record-breaker at Bluewater Lakes in Champagne, France.

He said: ‘I always knew The Carrot was in there but never thought I would catch it.

‘I knew it was a big fish when it took my bait and went off side to side and up and down with it.

‘Then it came to the surface 30 or 40 yards out and I saw that it was orange.

‘It was brilliant to catch it but it was also sheer luck.’

Andy posed for the obligatory photo with the catch before releasing it safe and well into the lake and celebrated with a cup of tea.

Jason Cowler said: ‘We put The Carrot in about 20 years ago as something different for the customers to fish for.

‘Since then it has grown and grown but it doesn’t often come out. She is very elusive.

‘She is in excellent health and condition. Congratulations to Andy on a great catch.’

Your daily horoscope for Sunday, November 20, 2022

Good things are coming your way (Picture: Getty/Metro.co.uk) After all of yesterday’s trials and tribulations, you’ll be glad to hear that things are looking up. The Sun is aligned with Jupiter, bringing positive energy to the signs, so expect good news and plentiful opportunities to come your way. Feeling the urge to expand your horizons, […]

Dusan Vlahovic called the allegations ‘absurd’ (AFP via Getty) Dusan Vlahovic has hit back at reports claiming he had an affair with the wife of his Serbia teammate. The Juventus striker, who was wanted by Arsenal last year, has made just one appearance as a substitute so far at the World Cup. Recent reports in […]

It’s a drab rainy morning, but you wouldn’t know that at MAC Cosmetics’ Carnaby Street store. A drag queen, charity workers, influencers, and members of the LGBTQ+ community have gathered for our photoshoot in joyful and vibrant energy – all in the name of lipstick. MAC launched its three Viva Glam lipsticks back in 1994. […]