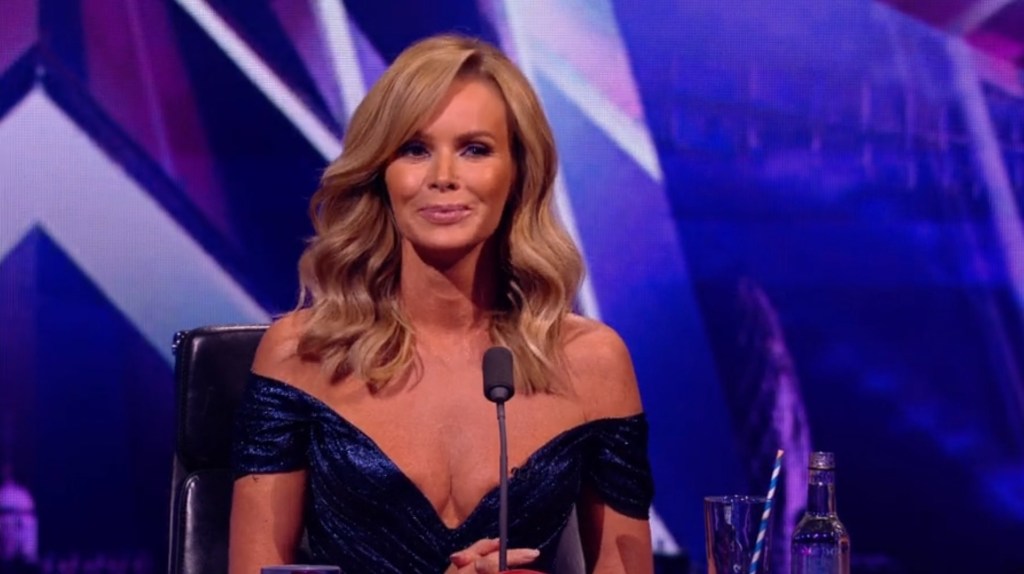 Amanda has been judging on BGT for 15 years (Picture: ITV)

Amanda Holden shamelessly put Simon Cowell on the spot after questioning whether she is returning as a judge in next year’s Britain’s Got Talent.

The 51-year-old TV personality has been a staple on the hit ITV show since it first launched in 2007, and is rumoured to return to the panel next year.

During Monday’s Variety Club Awards, Amanda paid a touching tribute to her BGT boss as he nabbed the Exceptional Generosity in philanthropy gong, but according to reports she couldn’t help but enquire about next year’s judging arrangements.

The Mirror claimed she told the 66-year-old music mogul: ‘I am currently in negotiations for my 16th year on Britain’s Got Talent.’

After Simon assured her that the ‘deal is done,’ it is believed that Amanda fired back: ‘No it is not. The deal is not done.’

While Amanda’s role as a judge remains uncertain, (for now) co-star David Walliams’ appearance hangs in the balance.

Amanda doesn’t know if she’ll be back on the panel next year (Picture: REX)

The children’s author and former Little Britain star has been met with a fierce backlash this week after calling one elderly performer the C-word three times after he walked off stage and making crude sexual remarks about a woman hopeful, according to a transcript leaked to a newspaper.

The slurs were picked up by a mic used to record chats between him and fellow judges Simon, Amanda, and Alesha Dixon at the London Palladium in January 2020.

An insider told The Daily Mail: ‘This could not have come at a worse time in terms of his return to BGT, the discussions are going on right now so David’s remarks have now become a huge part of the conversation.

Reports have suggested David Walliams could be axed from next year’s line-up (Picture: Getty)

‘He hasn’t signed any deal yet which has come as a relief because now there are options. It is a family show and this isn’t just a negative thing to happen, it is offensive to people.

‘It has left David in a very precarious position. There are some people involved in the show who point blank don’t want him back, there is a danger of this incident becoming part of the BGT narrative and nobody wants that.’

David, who joined BGT in 2012, said in a statement: ‘I would like to apologise to the people I made disrespectful comments about during breaks in filming for Britain’s Got Talent in 2020.

‘These were private conversations and – like most conversations with friends – were never intended to be shared. Nevertheless, I am sorry.’

Metro.co.uk has reached out to Amanda Holden’s reps for comment.

CM Punk hasn’t been seen on screen since All Out (Picture: AEW) The Elite mocked CM Punk on AEW Dynamite the same week Kenny Omega urged fans to ‘move on’ from their backstage altercation at All Out. Back on September 4, after winning the AEW World Championship, the WWE legend used the media scrum to launch an astonishing verbal […]

Queen and Freddie Mercury fans remember charismatic star on 31st anniversary of his death: ‘No one will ever compare to you’

Fans are honouring their favourite rock star (Picture: Graham Wiltshire/Getty Images) Freddie Mercury’s fans and former bandmates are remembering the Queen star on the 31st anniversary of his death. The flamboyant and charismatic frontman died aged 45 on November 24, 1991, after suffering with bronchial pneumonia resulting from Aids. Mercury – a writer and performer […]